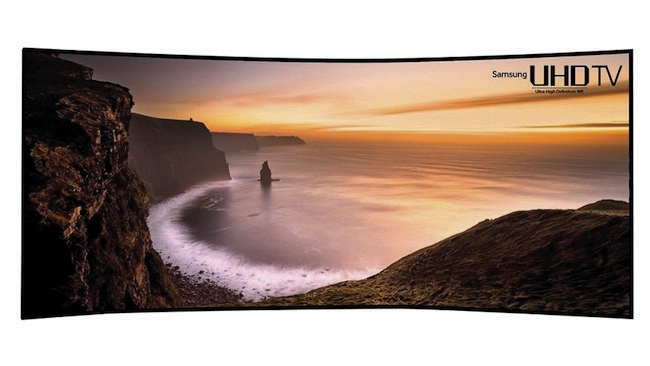 It’s safe to say 3D TVs are nearly dead and buried, so now it’s time for the rise of Ultra HD (UHD) TVs, complete with 4K resolutions and prices already dropping. You can get a quality 50-inch 4K TV from TCL for $999. LG, Sony, TCL, Seiki and others already have units on the market, and the sizes are already getting bigger. Now, both LG and Samsung are ready to debut 105-inch, ultrawide 21:9 UHD TVs at CES 2014. It’s a battle of the giant UHD TVs between rivals LG and Samsung!

This is an LCD model (LED backlit), which should bring the price down a bit; LG has a curved OLED UHD TV coming in at 77 inches, and that technology is always expensive. Since prices haven’t been revealed yet, or too many other details, we can probably assume the cost will start around $30,000 to $40,000, about what Samsung’s ‘chalkboard’ 4K TV starts at. Other details won’t be released until CES, so stay tuned!

Samsung Strikes Back With Its Own 105-inch UHD TV

Let the very-big television set wars continue! HDTV manufacturers have been attempting to one-up each other with bigger and bigger HDTVs, going back a few years, so it’s only natural that they’ve moved into the giant UHD TV battle. As such, Samsung has its own curved 105-inch UHD TV, with screen features similar to LG’s - 21:9 aspect ratio and 5120 x 2160 resolution.

Samsung didn’t say if it’s LCD (LED backlit) or OLED, but we’d wager it’s LCD like the LG 105UB9 model. Samsung did indicate it’s the most-curved ultrawide UHD TV, plus uses a Quadmatic Picture Engine to deliver quality ultra HD picture from any source. Again, this may be a hit for home cinema lovers looking for the best of the best when it comes to 4K TVs that are ultrawide at 21:9. The curved screen mimics movie theater screens worldwide. Also, no pricing was released, but like with the LG, we can probably safely bet it’ll cost $30,000 to $40,000. If it’s lower than that, we’d be shocked; their 55-inch, curved OLED 1080p HDTV starts at $9,000.