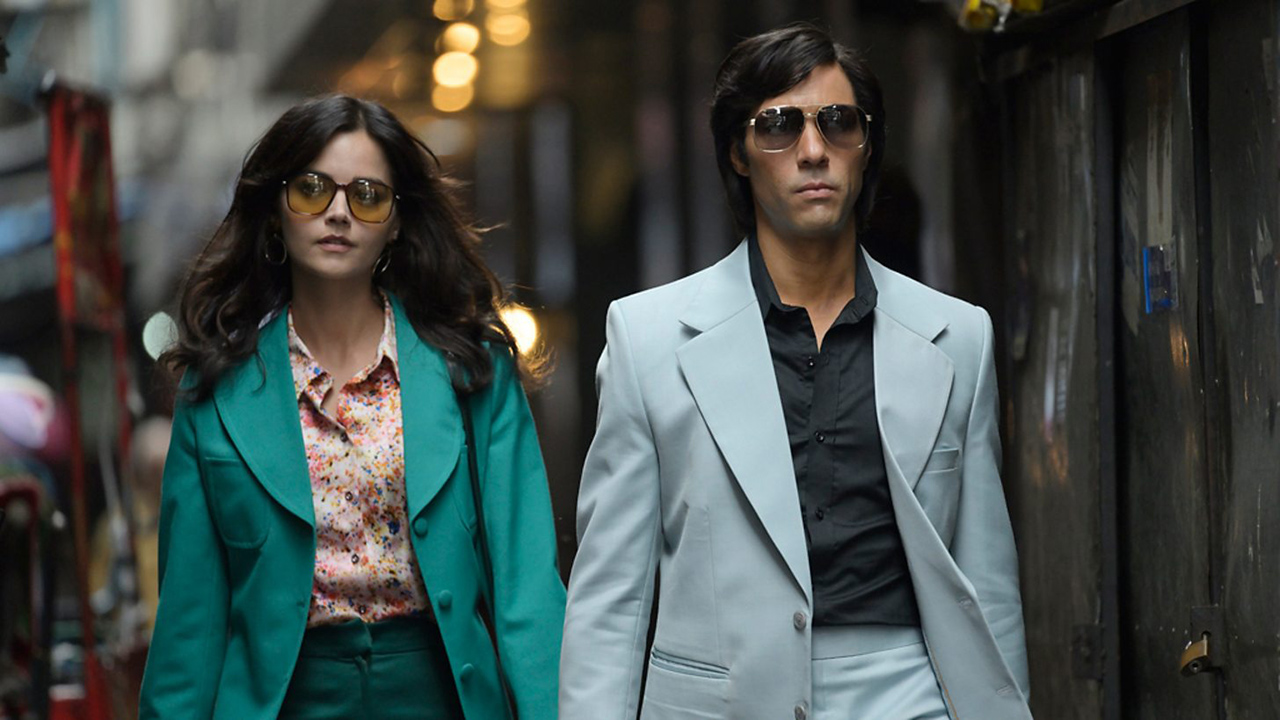 On New Year’s Day, BBC iPlayer dropped all eight episodes of Mammoth Screen’s crime drama The Serpent, with an international Netflix release to follow. We spoke to Si Bell, one of the series’ three directors of photography, about the creativity and challenges of bringing this must-see TV to the screen.

Shot primarily in Bangkok on the Sony Venice, The Serpent is based on the true story of Charles Sobhraj (Tahar Rahim), a serial killer of Western tourists in 1970s Asia, and the Dutch diplomat who built a case against him, Herman Knippenberg (Billy Howle).

“I was originally going to be shooting the opening four episodes with [lead director] Tom Shankland,” says cinematographer Si Bell, “but unfortunately the shoot was pushed a number of times due to actor availability.” After extensive discussions with Shankland about the look, Bell was unable to wait any longer and went off to photograph A Christmas Carol, ultimately joining The Serpent to film most of the latter half of the series. 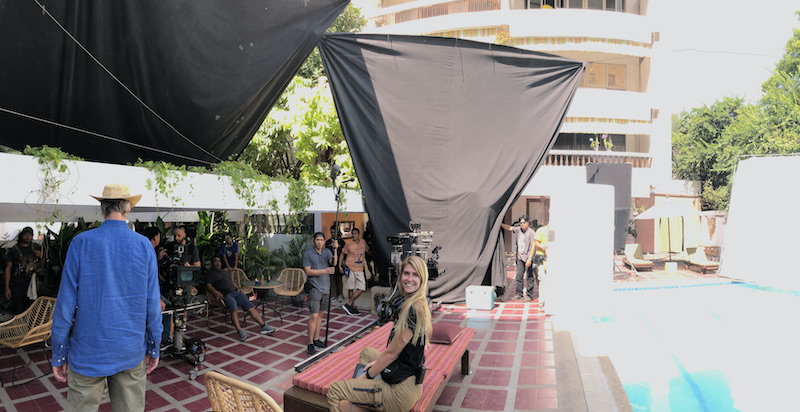 Poolside, where a sizeable portion of the shoot took place. Image: Si Bell.

Shankland and first block DP Seppe Van Grieken had established a visual grammar to differentiate Sobhraj and Knippenberg’s stories, lensing the former with anamorphics and the latter with spherical glass. “So the first four episodes of Charles’ story are shot on Kowa anamorphics and an anamorphic adaptor with a 24-290mm Optimo [zoom],” Bell explains, while noting that they strove to use zooms “for emotional effect or to add tension. We tried to make all the camerawork feel motivated emotionally by the story.”

Knippenberg’s thread was shot on Zeiss Superspeeds, but this grammar evolves in the series’ second half. “Herman is getting closer to Charles, and the two timelines are drawing closer, and Herman enters Charles’ world with the raid on Kanit House. We felt we should then blend the two styles at that point. We also felt we would start to become closer to Herman physically with the camera, and become slightly more emotional and slightly less observed as the two men get closer together and the tension heightens. At first we talked about going fully anamorphic but due to the idea of bringing the camera physically closer we felt like the Superspeeds with their very close focus would help us with that.” 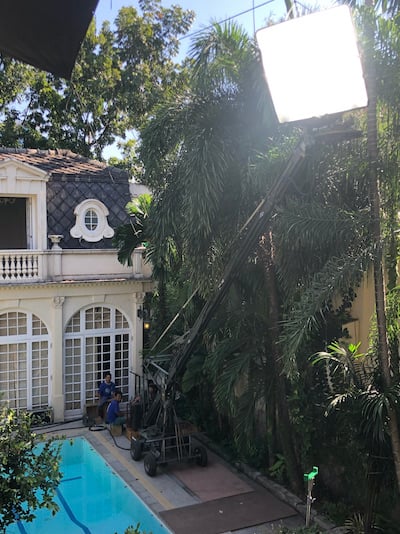 One of the immense lighting rigs used. Image: Si Bell.

The series afforded Bell a lot of creative opportunities when it came to the lighting. “I think in Asia you have license to use colours that you probably wouldn’t get away with in the UK. At the same time,I always thought it should be motivated from the reality of the type of location. I tried to create as much mood as possible when the scene demanded it, using lots of negative fill. In Kanit House I tried to push as much daylight in as possible using pretty much the practicals inside with a bit of LED if needed.

A highlight for Bell comes in the fifth episode, when Nadine Gires (Mathilde Warnier) visits the Kanit House at night. “I wanted to try and make that scene all feel like it was only lit by the pool light,” says Bell, “and have that ripple reflection effect on the ceiling. We rigged water trays outside below with par cans firing into them, and had machines and towers to try and fire the light in to hit the characters.”

Some other impressive set-ups achieved by the Thai crew can be seen on Bell’s Instagram feed, including large-scale blackouts of windows, and an Arri M90 HMI being raised into position on a GF16, a 30ft crane more commonly used for cameras than lights. “Thumb Thumb, our Gaffer, and Chet, our Grip, were both a massive support to me as well everyone else,” Bell enthuses. “What I loved was how the grips and sparks worked so closely together. I remember turning up on set in the morning. All the kit would be already there and set up. All the lights would be burning. Everything would be perfect and the set was so calm.” 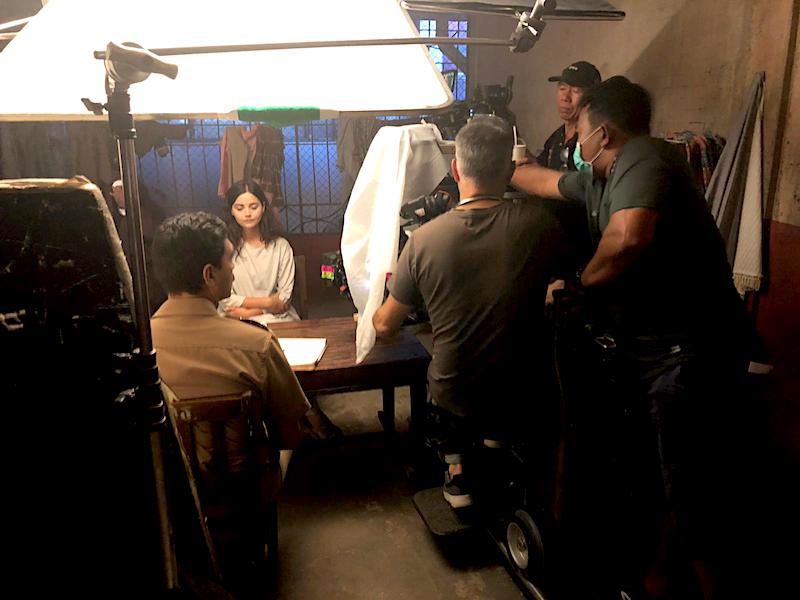 Jenna Coleman being filmed in one of the series later episodes as her character, Marie-Andrée Leclerc, confesses to the crimes of her partner, Charles Sobraj. Image: Si Bell.

Bell was lucky to miss the extreme heat and rainfall which hampered Van Grieken’s block. “Once I started, it cooled down a little, although it was still over 30 degrees. That was a challenge for sure, and the traffic is crazy in Bangkok, and unit moves in the day aren’t advised.”

The series was hit by the pandemic less than two weeks before it was due to wrap. After much uncertainty, an August pick-ups shoot in Hertfordshire – mostly standing in for Paris – completed filming. Bell had moved on to other projects by that time, with fellow DP Anton Mertens having stepped in for the final leg of production, but he was able to participate remotely in the grade using Streambox.

“I graded episodes five to eight with Perry [Gibbs] from The Farm,” says Bell. “It worked so well. We would be on FaceTime audio on the AirPods and have the Streambox set-up on my iPad Pro. We tried to be subtle, but still push the period feel, adding a slight grain and softening the edges of the lenses a little, and matching the stock footage in the transitions as best we could.

“I’ve been really blown away with the reaction to The Serpent,” Bell concludes. “If we hadn’t worked through the pandemic, and we hadn’t done the reshoot, and I hadn’t been working remotely, and the guys hadn’t been editing and mixing and doing ADR remotely, then the show still wouldn’t be complete. I know what we do isn’t saving lives, but I’ve got to say, I feel like it’s been a big piece of escapism and it’s given people something to talk about, just like many other shows that have been completed in the pandemic. In that way, I'm proud of all the hard work the industry has put in to keep going and adapt.”