Want to shoot anamorphic on a smartphone? Sandmarc's lens could be what you are looking for 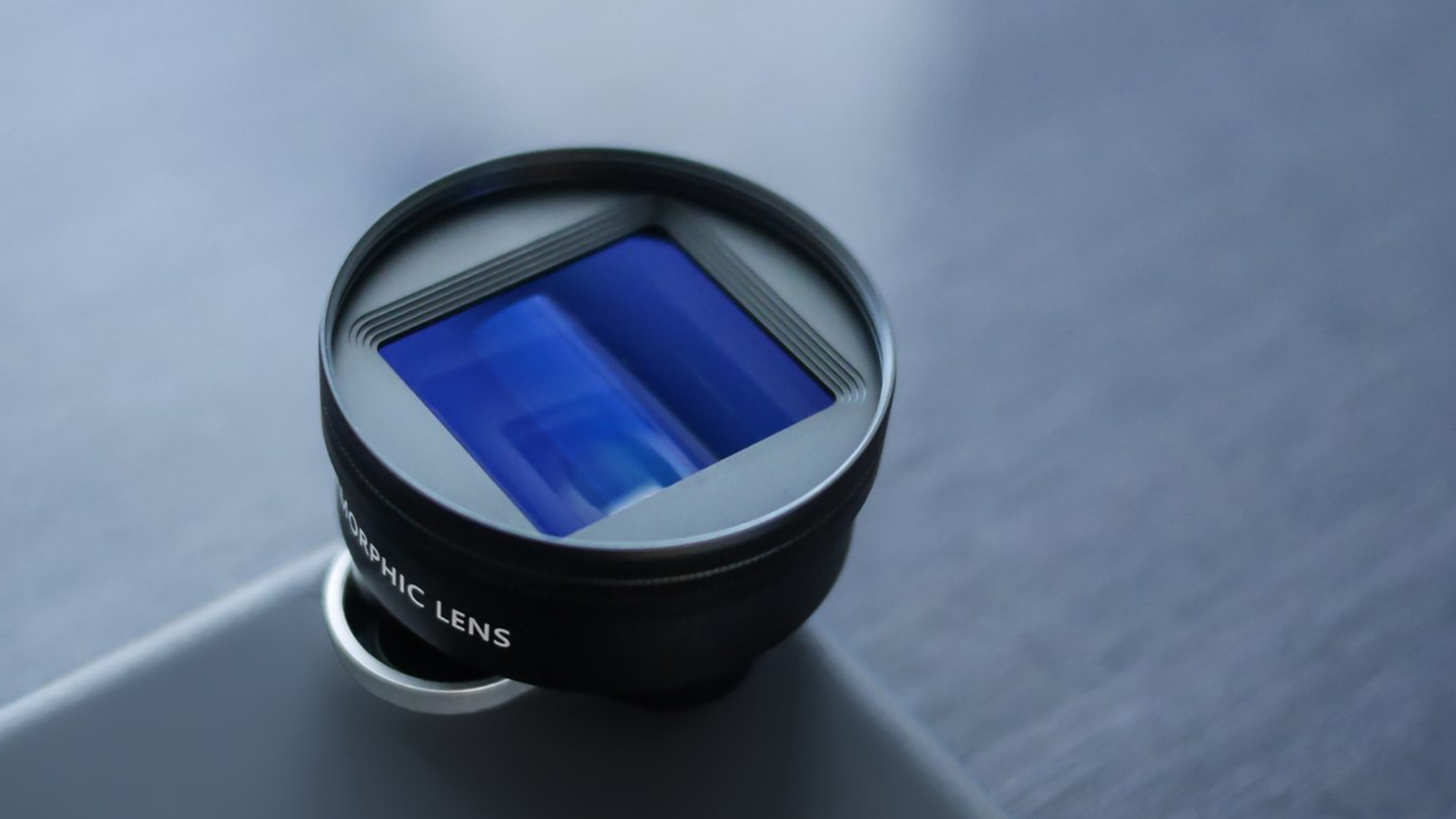 Review: Everybody wants that cinematic look, and as a result anamorphic shooting is on the rise and it's what low budget filmmakers have been craving for a long time. And now you can even shoot anamorphically on your phone. We take a look at Sandmarc's new lens for iPhones.

The rise of the large chip video camera, at all budgets, inevitably brought with it the desire to use some of the same toys as the big boys. From cinema style primes and zooms, as well as what could be considered to be a golden subset of these, anamorphic glass.

The history of anamorphic lenses goes back to the 1920's. 1927 to be precise, with the development of the Hypergonar lens by a man by the name of Henri Jaques Chrétien. But it didn't come into widespread use for filmmaking until Twentieth Century Fox bought the rights to it for integration into its Cinemascope system.

Why use it? Simply put, an anamorphic lens allows you to shoot widescreen images in a narrower format by utilising the entire imaging area. In more recent times the idea was used digitally by standard definition cameras when 16:9 came along. The cameras would record a widescreen image into a 4:3 container, which was then 'desqueezed' by the display it was shown on.

So what's the point of it now? Using an anamorphic lens on a modern camera lets you shoot full cinemascope style images, using the full height of the recorded picture without the need to resort to cropping. It also produces desirable effects that are currently in vogue, such as unique lens flares. Which brings me to the Sandmarc anamorphic lens attachment for iPhones.

Phones are increasingly being used for video, and the picture performance they are capable of is improving with every iteration. Sandmarc's lens seeks to maximise the use of such capabilities by offering what looks to be a truly cinematic style image. 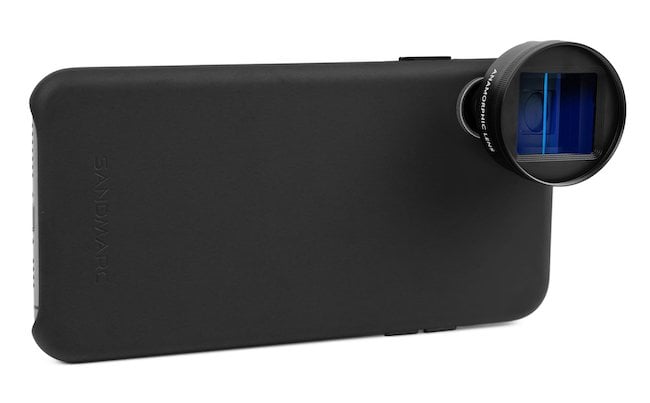 The system comes with a new phone case, which features screw in mounts for the lens. There is also a strong clip style system if you would prefer not to use the case. Personally I can't see much reason not to use the supplied case. It's very low profile, well made, and looks good without the lens attached to it.

The lens itself is nicely made and put together, with a good weight (46g) for such a small piece of glass, being made of aluminium rather than cheap plastic. It's certainly high quality. It screws into the supplied mount/case really easily. Once screwed in you then need to rotate it to line up the vertical marker line with a line that is marked onto the phone case. Quick and easy.

Width wise, using it you will gain a 1.33x increase in horizontal FOV. This translates into a 2.4:1 ratio in video modes, and a 16:9 ratio (once desqueezed) when the phone is in stills mode.

The lens is also supplied with a decent cap to protect it during transportation. 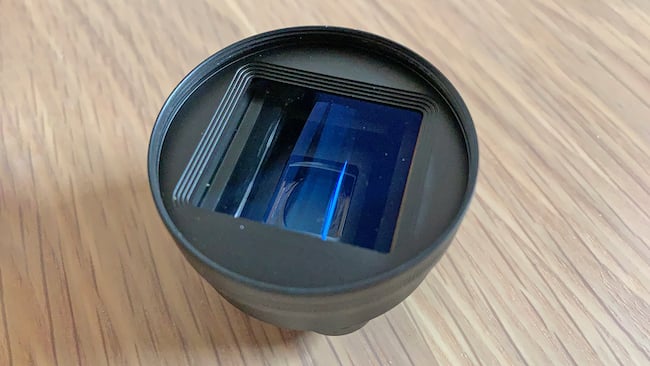 Using the Sandmarc anamorphic lens is pretty much the same as per using the phone for video normally. Except that of course the picture is stretched. Luckily FiLMiC Pro is on tap to give you an accurate desqueezed preview. FiLMiC Pro's anamorphic lens option is designed for another make of lens, but it works perfectly well with the Sandmarc model as well. Just make sure you untick the option to crop the picture to the framing overlays! Yes I made that mistake!

Something else to look out for is to make sure the vertical alignment markers for the lens are lined up before pressing record. If you've had your phone in your pocket or in a bag, or even during handling while mouting the phone on a tripod, it could move out of alignment. 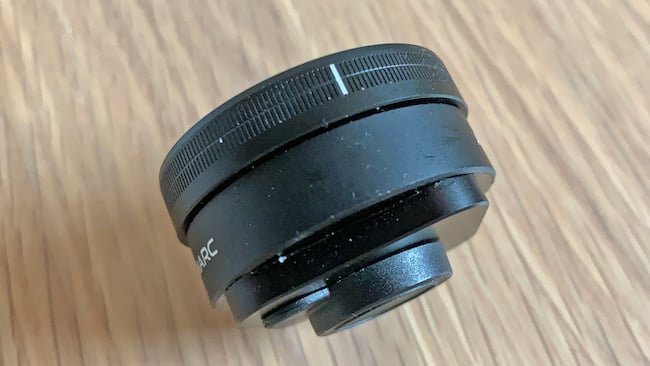 A top view of the lens showing the vertical alignment marker.

The Sandmarc lens is never going to give you the same quality as an Arri prime. There is some degree of barrel distortion as well as a small amount of softening towards the extreme horizontal edges, but with the width of view here, and the fact it is is an add on lens for a phone, there was always going to be compromise. The distortion is very easy to fix in post, and once you do the lens actually performs very nicely, all things taken into consideration.

My original intention was to shoot using a DJI Osmo Mobile 2. Doing this requires some additional counter balance weight and it can be done. However, I found that the wind was not cooperating, and the Osmo couldn't quite respond quickly enough with the extra weight to counter it. To be fair to the Osmo 2 I was asking it to do something it wasn't really designed for. So if you do wish to use the Sandmarc lens (or any other lens for that matter) on a gimbal, you might want to investigate a model that is designed to cope with a bit more weight.

The review unit was supplied with Sandmarc's ND filters as well. This is a neatly packaged set of three filters of ND4, ND8, and ND16 strength, and they screw in directly to the front of the lens. They can't be stacked however. These are effective and essential if you want control over the picture, however in the strongest outdoor light an ND32 or stronger may be required, particularly since the phone can only adjust exposure using gain and shutter speed.

Another aspect of using the ND filters is that the width of the anamorphic lens view means that there is some vignetting when they are used. Although once you have performed a minor distortion correction in post this problem disappears.

The Sandmarc Anamorphic Lens Edition is a nice addition to your iPhone filmmaking arsenal. Yes, there some limitations as you'd expect, but it does give you an extra creative option, and, frankly, it is a lot of fun to use. It isn't just limited to video either, giving as it does a really great option for taking panoramic photographs. If you combine it with a raw photo app such as Halide you will be set up to get some really nice, wide images.

Cinematography on a smartphone is a subject that causes some controversy amongst readers. But the fact is that it exists and of you don't like it, nobody is forcing you to film anything with a phone. On the other hand, for people who want to use their phones for video, it is great that attachments such as Sandmarc's anamorphic lens exists to really help expand the creative abilities for anyone who uses such a device, and I applaud the company for continuing to advance what is possible.

The Anamorphic Lens Edition costs $159.99 and is available for use on iPhones from version 7 upwards. To find out more, visit the Sandmarc website.