Making LED lighting is not easy 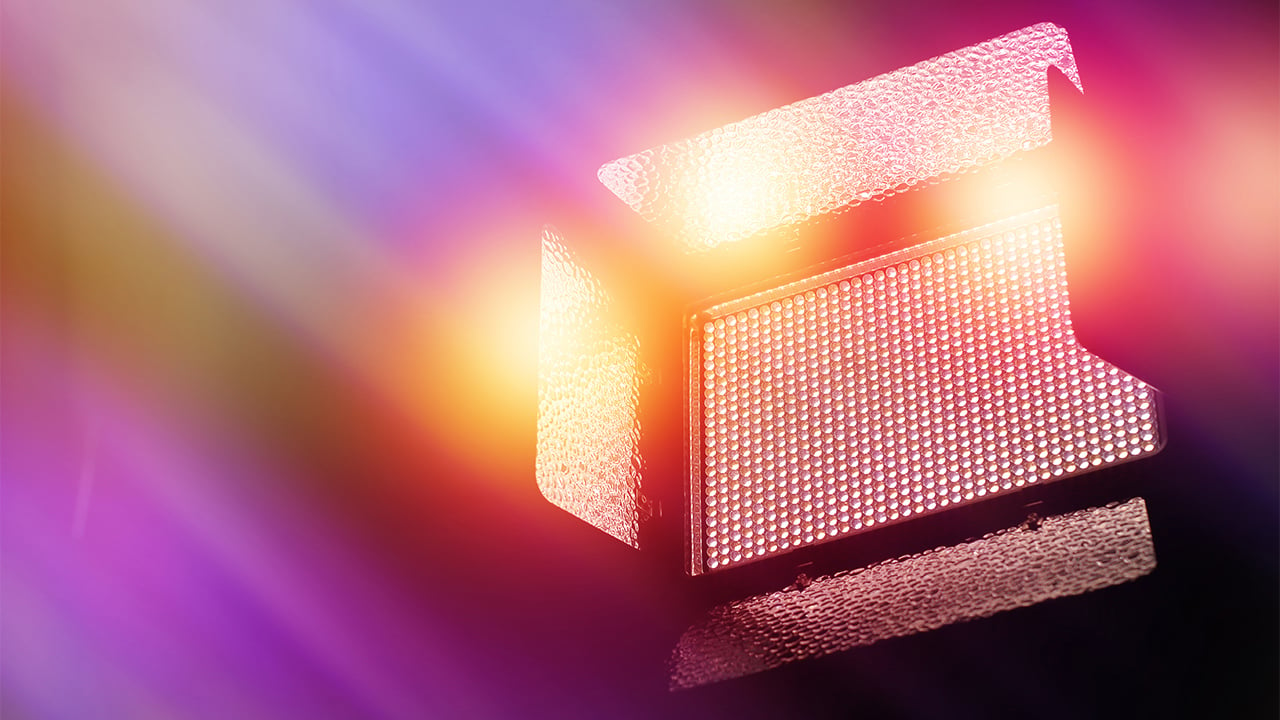 We now take LED lighting for granted, but acheiving a specific colour is actually quite complicated. Why is that?

At some point, reasonably soon, full-colour mixing will become more the rule than the exception. It's a trick that's already available from some of the higher-end manufacturers, with Kino-Flo and Arri both releasing colour mixing panels of fairly high power. Rosco has bought into DMG Lumière specifically for its colour technology and Aputure showed its colour mixing panel for the first time at NAB 2018.

Colour mixing might be convenient, but there's a reason it isn't universal yet. The principles are straightforward and disco lights have been doing it for years, though they're usually aimed at stage and live entertainment work in situations where we want bright colours that are acceptable to humans, not cameras. They also tend to risk flicker by using pulse-width modulation, where the light is pulsed very quickly to control its apparent brightness. They can sometimes be usable, but even if they are, just as with white-emitting lights, LED technology has a few curve balls to throw us.

Most people are familiar with the idea of mixing red, green and blue light to achieve any colour. As long as we're observing with our eyes that works nicely, as demonstrated by the display you're looking at. Human eyes are happy to interpret anything that contains reasonably similar amounts of red, green, and blue as white light – or, in case of colour mixing, anything that contains, say, red and green as yellow. Unfortunately, our eyes can't tell the light containing a very narrow band of red and a very narrow band of green, as on the left, from light made up of a broader band of light including red, orange, yellow and green. 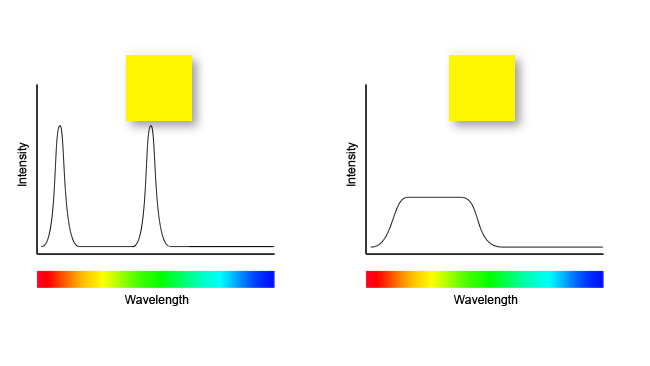 To the eye, both of those will look like yellow light. It's a trick called metamerism, and it's come up before in a discussion of white LED lights.

But why does any of this matter if the only purpose is to make pretty colours or perhaps to match a reference? Well, sometimes the results will be unpredictable. Objects reflect certain colours of light just as lights emit certain colours. Illuminate a cyan object with cyan light and it will look bright, as on the left below. But illuminate that same cyan object (shown as the lower cyan line on the graph) with a green light and a blue light (shown as two black peaks), and it risks looking dull and underexposed; only the colours emitted by the light and reflected by the object are seen. 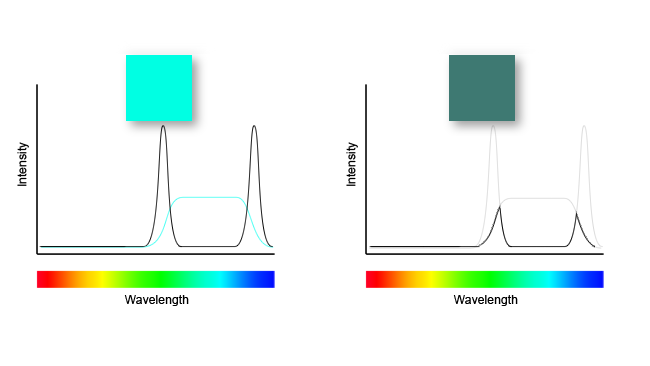 Output from a cheap colour-mixing LED illuminates a colour it does not emit. The result is dull and undersaturated

No light source can ever quite be truly made up of just one wavelength, but many LEDs are narrow enough that they behave in much the same way for all practical purposes and will absolutely cause these problems. Happily, there's a solution and we can often tell whether the LEDs involved are using the improved approach just by looking at them.

The first LED indicator lights were red. As a historical note, the very first light emitting diode was actually greenish-yellow, made accidentally in 1907 when one of Marconi's collaborators, Henry Round, was experimenting with chunks of silicon carbide in pursuit of better diodes. Red LEDs became affordable in the 1970s, with green and shades of orange and yellow not far behind, and when blue arrived in the 1990s it had been hankered-after for decades for its obvious applications in large video displays and the generation of white light. The problem with all of these is that they produce colours using some fundamental aspects of physical properties of the materials they're made of, creating that narrow output.

Solving that problem involves the same technology as white-emitting LEDs. White LEDs are a yellow phosphor on a blue LED, combining to create white. Colours not available from basic LED technology, such as magenta and tangerine orange hues, have also been produced by adding a coloured phosphor to a blue emitter. Red and blue can also be done this way (green is tricky). It's less efficient than using LEDs that emit the right colour to begin with, but the output of the phosphor is far broader and less spiky, something like this: 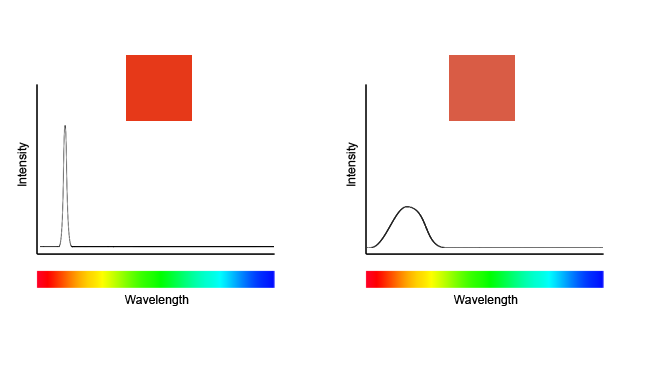 Output from a red-emitting LED at left, compared to the much broader, smoother output of an LED driving a red phosphor. Yes, the one on the right is slightly less saturated

Mix colours based on this technology and things become a lot more predictable because there are now no – or much smaller – gaps between colours. Colours are more likely to look on the monitor as we'd expect them to, based on what they look like in real life. They're less likely to cause highly saturated objects to look dull and lifeless – and we can often tell which technology an LED light is using by looking at the LED emitters. Below is an image of one of the emitter clusters in a Rosco DMG Mini Mix. Note that the upper and lower LEDs appear transparent, with the internal metal parts visible; these do not use phosphor. On the others, the phosphors are visible as an opaqueness in the transparent plastic cap. Each of these devices has two actual emitters in it. 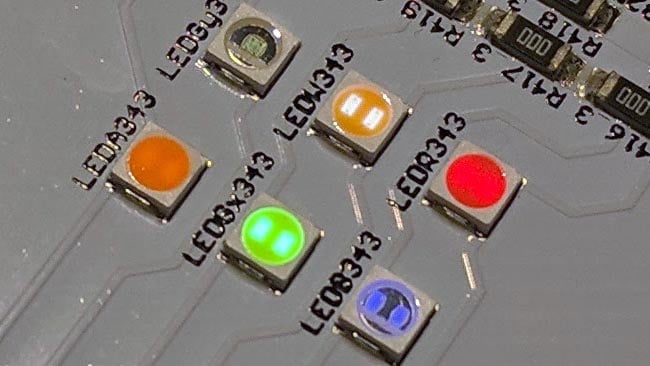 LED emitters in a Rosco DMG Mini Mix light. Topmost and bottommost LEDs do not use phosphor, the others do

Unfortunately, not all colours can be achieved by phosphor-coating a blue LED; the green in the Rosco fixture shown above is a decidedly yellowish lime green. 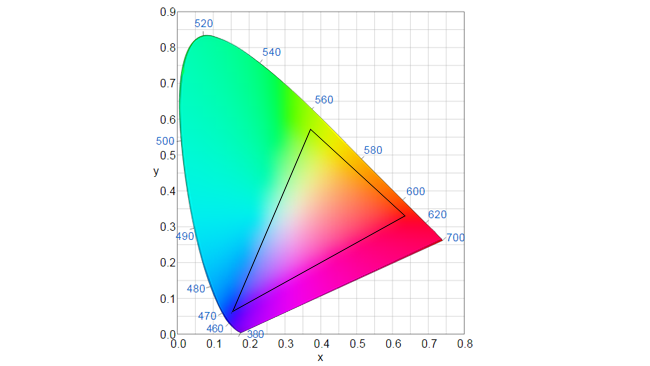 This diagram shows, very approximately, the colours that can be achieved by phosphor-converted LEDs. Green is somewhat lacking. Based on data from Lumileds

So, it's not a perfect solution. Also, if we have a good reason to actually want very saturated, narrow colours, then a colour-mixing light using phosphor-based LEDs is less able to do that than an equivalent using red and blue emitters.

In general, though, the phosphor approach will be easier to use.