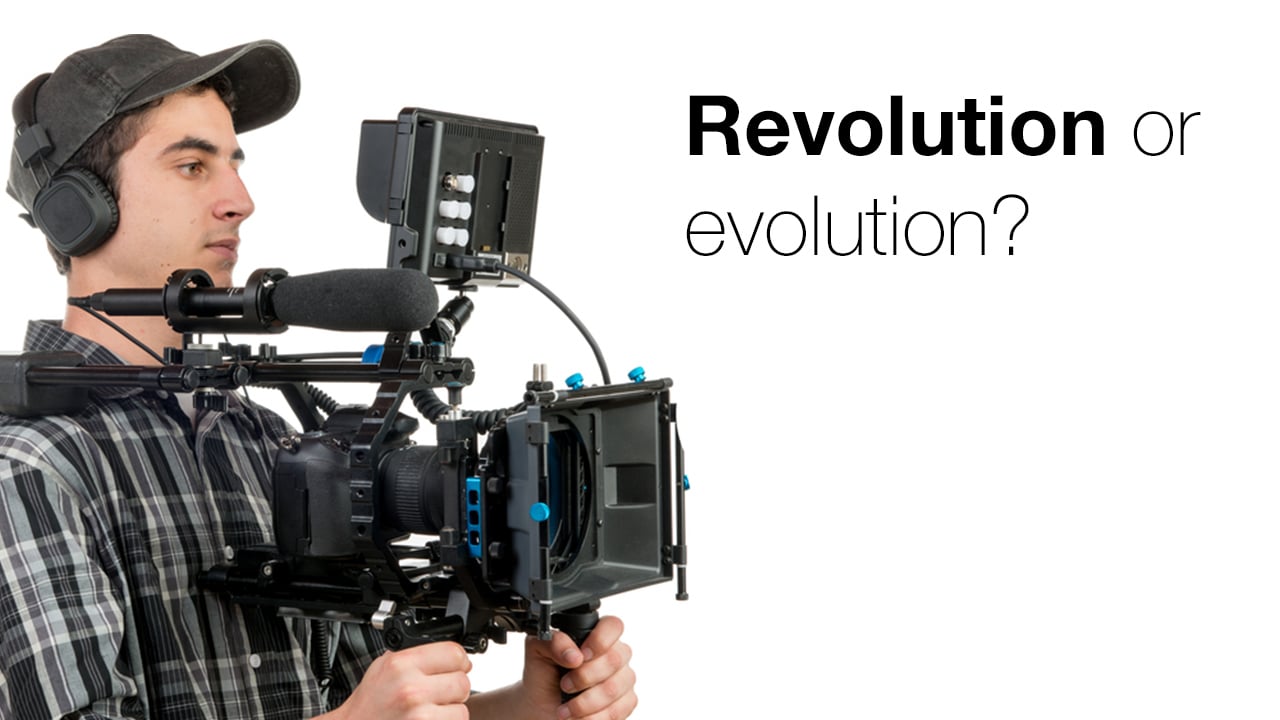 In the last decade, the evolution of stills cameras into video cameras has turned the video world upside down. ‘Cinema quality’ video is seen to be within everyone’s grasp. DSLR and mirrorless cameras have pushed forward developments in sensor size, dynamic range and sensitivity. Small, light DSLRs can go places larger cameras can’t go and we’ve seen the advent of hybrid cameras designed to cope equally well with video and stills. The effects have rippled down to affect the way cameras are made and the way we use them. Despite these achievements, maybe not all of those effects are positive.

Stills cameras were made to shoot stills and to make them viable for video shooting means a lot of additional items — rails, shoulder rigs, monitors, onboard recorders, extra batteries, audio inputs — you know the score. Many accept this as a minor inconvenience as they are getting top dollar pictures at a bargain basement price. Some may even relish the military feel of a bolted-together Frankenrig.

But ergonomics are not just a matter of convenience, they have a huge effect on how and what you film. You can shoot all day with a well-balanced camera on your shoulder, and this is not only of relevance to documentary. Many underestimate how much drama is also shot on the shoulder with heavy but balanced cameras which have a steadiness to them that doesn’t cry out ‘hand-held’.

Controls and menus on stills cameras have been developed with different priorities to video cameras. If you are working under pressure, having to go through countless badly thought out menus is a real hindrance to your working rhythm and some very standard video camera features — zebras, built-in NDs, useable audio — may be missing. Some may see this as a small price to pay, but it is a price nevertheless.

One unfortunate effect of this is that some camera manufacturers seem to have given up on ergonomic design altogether: Many new cameras being basically a box, with the manufacturer leaving it to third-party accessory providers to come out with mounts and rigs.

Big sensors mean longer focal length lenses for the same angle of view and long focal lengths mean shallow depth of field. The stills world introduced the concept of ‘bokeh’ and the veneration of the soft-focus background. Of course, shallow DoF can be both useful and seductive. It’s always been associated with portraiture and it’s great for interviews, but as I’ve argued before, we don’t always want it. I’ve seen comments on this site where people have said ‘all documentary is shot in Super 35 format’ and all news is shot on DSLRs. This is very far from the truth.

The shallow-depth-of-field look is just one look, not ‘the’ look, and I refuse to invoke the word ‘cinematic’ here. A full-frame 35mm sensor (864mm2) is much larger than anything we have been traditionally used to in the cinema — the closest thing to a conventional 35mm 1.85:1 movie frame (351mm2 in the camera but 237mm2 projected), in stills terms, is an APS-C (typically 337mm2).

Although it is a format going out of fashion, a number of celebrated movies have been shot on Super16 film — in the last decade: Black Swan, Moonrise Kingdom, Beasts of The Southern Wild, The Hurt Locker, to name but a few. A Super16 frame (92mm2) is less than half the area of a Micro4/3 sensor (225mm2). I don’t remember anybody remarking ‘great movies, but pity about the deep depth of field’.

That’s not to deny large sensors are a trend that is likely to continue, let’s just not assume they are the only way to make movies.

The dogma of prime lenses

The DSLR revolution depended on the availability of high-quality and cheap prime lenses. Stills zoom lenses are seldom satisfactory by video standards. The move to large sensors and 4K means that cine zooms are inevitably big and expensive, so primes are the norm on DSLRs for video use. Beyond that, an attitude has developed that primes are ‘better’ than zooms and that they are essential for all serious work.

As I’ve said on these pages 100 times or more, when you are shooting observational documentaries, the world you are filming does not stop for you to change lenses. If you are shooting any sort of performance, be it a gig, a studio session, a play, a sporting event or even a lecture, a zoom lens is also essential. Even when working on a drama, the ability to tweak the focal length is invaluable. But on documentaries, the lack of a zoom lens means you make your film in a different way — or you make a different sort of film. Rather than responding spontaneously to the world around you, you set up the world for your camera.

Yes, prime lenses are great and a zoom lens is always a compromise in some ways — speed/weight/sharpness/breathing/close focus: take your pick — but if you’ve grown up and are used to a long ratio film or ENG zoom — 10 to 1, 13 to 1, 15 to 1 — there is simply no substitute.

The obsession with the ‘look’

There is a lot of difference between the work and the mindset of a photographer and a cinematographer. A photographer aims for a single image that distils and captures an event or a situation, while a cinematographer is always working on a series of images flowing across time that tell a story. This, perhaps, leads to a different emphasis of what we look for in a camera.

A movie is a lot more than a series of shots and you cannot evaluate a video or movie camera purely on its specs, but the DSLR revolution may have encouraged the notion that the secret of movie making is about the right combination of sensor and lens. It isn’t, any more than a vintage Fender Strat and a Marshall stack will make you sound like Jimi Hendrix.

Cruise through indie video sites and you will discover a lot of discussion on ‘characterful’ lenses, an obsession with ‘vintage glass’ as if it holds the key to life. Of course, lenses are important — but not as important as lighting, or for exteriors, choosing the right time of day and angle. They might make a good film look just a little more stylish, but they aren’t going to make a mediocre film any better.