The Return of Deep Focus? (AKA Shallow Depth Of Field is not the only way...) 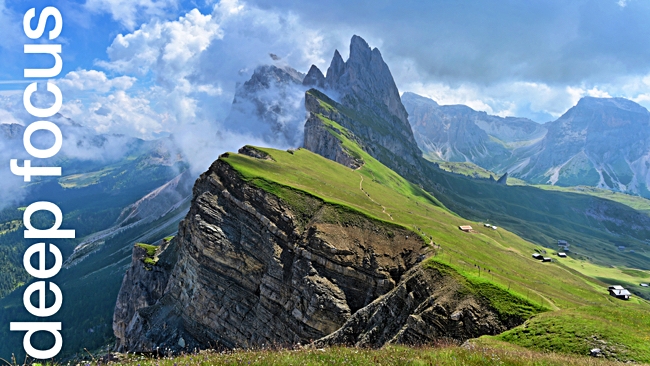 Replay: Once upon a time, Deep Focus ruled the cinema screen. Why did it fade in popularity? And do recent consumer and professional technical trends mean that it is now overdue a revival?

Filmmakers push technology in certain directions, but technology pushes back at us, too. A breakthrough in one area can hold us back in another; a technology that makes one style of filmmaking easier can impede another. And sometimes, what was seen as a breakthrough with hindsight looks merely like a shift in convention.

In the heyday of movies in the 1940s, a cinematographic breakthrough was proclaimed: deep focus. Most famously pioneered by cinematographer Greg Toland in Orson Welles' Citizen Kane, deep focus meant everything on the film set could be in focus at once. No longer did the filmmaker have to decide what was in focus and what was not. Everything was clear and sharp for the eye to discover. Some critics saw this as liberating the audience; rather than being controlled and directed, the viewer was free to make his or her own connections.

Deep focus (or deep depth of field, as we would call it today) was dependent on innovations in technology. Faster filmstock and powerful carbon arc lamps enabled Toland to shoot between f8 and f16 using (mostly) wide-angle lenses. A couple of years earlier none of this would have been possible.

Deep focus also involved a few tricks. Citizen Kane is loaded with complex composites where background action was shot separately and matted in. Deep focus also made extensive use of split diopters - basically a close-up lens cut in half that can be slid partially in front of the lens to enable close focus on an object or face one side of the frame while allowing the background to stay in focus. Split diopters are still in use to today. Brian De Palma, director of Carrie, is particularly fond of them.

Deep focus cinematographers became particularly ingenious in the 40s and 50s. In Alfred Hitchcocks' Spellbound (1945), the murderer, in a point-of-view shot, turns the gun away from his psychoanalyst (Ingrid Bergman) and on to himself. To enable both the gun and the subject to stay in focus Hitchcock, created a giant mechanical hand and gun.

To throw enough light on the set to have stopped down sufficiently to keep a real hand in focus would have imposed unacceptable levels of heat on Ingrid.

In Charles Laughton's Night of The Hunter (1955) the figure of Robert Mitchum on a horse in the background is actually a midget on a Shetland pony (yes, really). 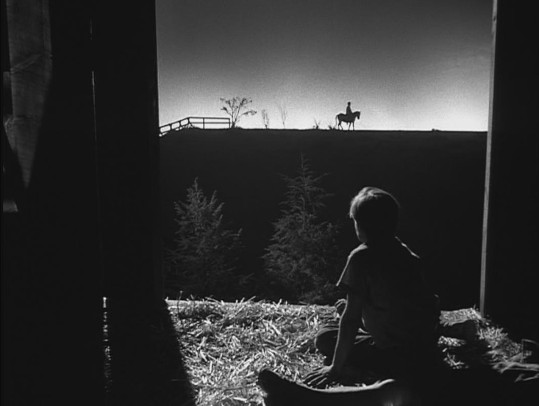 The decline of deep focus

So, what happened then to deep focus? Well, in one word, television. Detailed vistas didn't work on the small, low resolution TV screens, but close-ups did. Multi-camera TV studios encouraged cutting from angle to angle to tell a story and the language of TV began to influence cinema, partly because filmmakers were aware that the small screen was where their movies would end up.

By the end of the 20th century, the standard shooting formats for TV was the 2/3" chip video camera and the 16mm film camera (this in the UK - 35mm remained the standard film format for TV in the USA). As we all know, the size of the sensor affects Depth of Field - not directly, but because with smaller sensors (or gates, in film terms), we use shorter focal length lenses for the same angle of view and DoF is dependent on focal length, camera-to-subject distance and aperture. This meant that, compared to 35mm, we had reasonably deep focus cinematography whether we wanted it or not, but TVs were still small and there was no great desire for detailed wide shots. The term 'deep focus' fell out of fashion and, in the 21st century, filmmakers become more concerned with the opposite - welcome to bokeh.

Bokeh is a term unheard of in film and video a decade ago. It's a Japanese word for 'blur' that still photographers began to use in the late 90s to discuss the quality of the out-of-focus regions of an image. When still cameras and lenses began to be used for shooting video, the concept of ‘bokeh' came with them.

As video became cheap and commonplace, filmmakers with restricted budgets wanted the films to look classier. They might have shot on video, but they wanted their work to look like the movies. So various tricks were tried: shooting single field so 60 or 50 field per second video looked like 24 or 25fps film, turning sharpening circuits down, using low contrast filters, even adding fake grain. It was only at the end of the 20th century that it occurred to them that perhaps the most characteristic thing about the 35mm movie look was that not everything was sharp - unlike video, where everything was in focus (particularly amateur video shot on camcorders with tiny chips). Shallow DoF became associated with a ‘cinematic' look. It is worth pointing out that until then, shallow DoF was never seen as a particularly crucial asset. Super 16mm was beginning to be used for the cinema (such as The Draughtsman's Contract in 1982, Lock, Stock and Two Smoking Barrels in 1998 through to The Hurt Locker in 2008) and no one seemed bothered by the lack of bokeh. On the contrary, it was seen as making the job of the focus puller a little easier.

Someone realised that if you first projected your image onto a ground glass screen – say, the screen you might find inside a 35mm SLR film camera - then re-filmed it onto video, something magical occurred; not only did you have shallow depth of field, but you could use inexpensive 35mm still lenses and it looked like the movies. This was the DoF adapter which became obsolete as soon as the DSLR revolution occurred. Large sensor cameras with longer focal length lenses became the economic way to make films.

It's easy to understand the appeal of shallow DoF; it makes things look beautiful or, if you like, it aestheticises reality. When the background is soft, the foreground actually looks sharper and attention is concentrated on the subject. In still photography, shallow DoF is great for portraits and in filmmaking, of course, it's much desired for interviews. When we film interviews, we are seldom interested in the background and don't usually have much control over it, we want the background to go soft to concentrate on the interviewee (with smaller sensor cameras, you would do this by moving the camera back and going on to a longer lens, but, of course, this is not quite the same look as the perspective changes).

Curious, then, that the least cinematic part of filmmaking - the talking head interview - began to set the aesthetic standard for filmmaking. For most of the time, particularly in documentaries, we do want to see the details, we do want the audience to find elements and make connections (and not just look at the things we are pointing at). Also, if we are capturing the world as it happens (which, for me, is what documentaries are all about), we don't have time to change lenses or pull focus. Pulling focus on a documentary also implies we know already what is the most important part of the frame (and usually we don't). Shallow DoF lends itself to composed, studied images; it is a impediment for a handheld, moving camera. It has changed the way filmmakers approach documentary.

As screens at home get bigger and resolution higher, now is the time for a revival of deep focus. Movies shot on 65mm that made the most of a huge, detailed canvas, like Lawrence of Arabia or 2001, are no longer a joke on TV. With digital technology, the sort of complex matte shots used on Citizen Kane are now relatively easy. As sensors get faster, it gets easier to achieve the small apertures needed for deep focus. And as television producers adapt to bigger screens and higher resolution, we have seen the return of the wide shot. Look at a high-end US TV series like Fargo or Better Call Saul and you will find it is full of beautifully composed, detailed wide shots - deep focus is back with us. Maybe soon, shallow DoF will soon connote low-budget filmmaking, rather than cinema.

Perhaps deep focus would never have been talked about as a concept if it hadn't been associated with great cinematographers who felt a particular need for greater depth of field. Perhaps we should see it not as a style, but rather one approach out of thousands to shoot a scene. No cinematic style or convention has value in itself; it's how you use it to tell a story that matters.