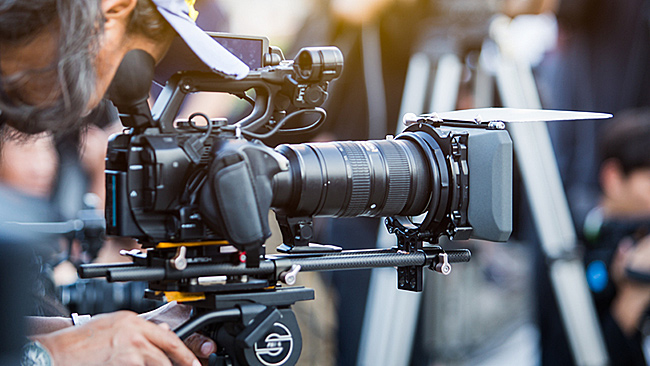 Replay: The DSLR revolution had a huge impact on the video production industry. Conventional views of what a video camera should be were turned on their head, and doors were opened, making low budget filmmaking much more accessible. But the ripples from the revolution went far and wide. Roland Denning takes us on a journey of the effects those ripples caused.

How much should a camera cost?

While reading the spec for Panasonic’s forthcoming AU-EVA-1 camera, I was amazed to find a comment online suggesting that this 5.7K, Dual Native ISO, Varicam-derived camera was ‘overpriced’ (the body is around £6k/$7.5k). To me, it emphasised that there are two entirely different worlds of camera buyers out there with very different expectations.

For many years, the world of professional quality video was clearly delineated from domestic products. Manufacturers could even segment the market further to gain maximum income. Back in the analogue days, Sony actually sold three levels of BetaSP which roughly corresponded to the broadcast, corporate and educational markets — the same format, just different engineering standards and all of it way beyond the pockets of amateurs. The huge gap between broadcast-standard film and video and the rest carried on into the 21st century.

A decade ago everything changed when mass produced stills cameras and lenses began to produce images that not only could compete with the pictures on TV but, in some cases, actually looked better. Movie production, once the domain of specialist, hand-built precision machines could now emerge from commodified components.

In the nineties, a broadcast-standard camera kit would be the equivalent of around £50k in today’s money, but a ‘standard kit’ (16mm then BetaSP) could last you up to a decade and there were standard hire rates that everyone expected to pay. There was a rule of thumb that, if you bought a kit on lease-purchase and you got one or two days hire a week, the lease payments would be covered; anything above that would be profit. That very expensive camera, rather than being a drain on your resources, could earn more money than you. Cinema was in a different league again as it was exclusively 35mm (in the UK, television had long abandoned it in favour of Super16 while 35mm remained standard in American TV-drama).

All that changed with the advent of digital formats and high definition. Today you don’t have to depend on regular hires or just be very rich to own your own pro video camera.

You can kit yourself out today with a pretty good broadcast-standard kit for £25k rather than £50k. But you may well expect to do it for £5k. We are in an era of two worlds — those who have entered the world of film and TV from a DSLR background and those who have travelled a more traditional broadcast route.

The former have a radically different set of expectations from those with a more traditional broadcast background. To those raised on DSLRs, £10,000 is a lot to pay for a camera body with a good zoom lens. To the latter, it is a bargain. But picture quality is only a small part of the story — it is hard to find a camera that doesn’t give you a satisfactory picture these days if you know how to use it.

The world of film and video equipment has become diverse and fragmented. Although I’m sure there are plenty of people making a decent living through steady work with their C300, FS7 or Alexa (the closest thing we have today to ‘standard kit’), cameras and formats go out of fashion quickly. Producers’ whims are more varied, work patterns are more erratic, people play a variety of different roles and may have a mix of properly paid work, low paid work and personal unfunded projects. Many own a capable, low-cost camera and hire in at the higher end as needed. Others have dreams of making a truly independent, self-funded feature using kit they already own.

But the higher end broadcast market continues. Producers still want to rental cameras they have heard of and trust, crews want kit they are familiar with, editors want formats that fit with their workflow. Rental companies need to supply those needs and want kit that have minimum downtime and require minimal maintenance. Owner/operators can deal with a few quirks that would infuriate rental companies, thus some apparently innovative cameras are absent from rental companies’ lists.

It should go without saying that what really costs money in filmmaking is labour, not equipment. With a paid crew of any size, a camera that is £3000 cheaper to buy and £150 a day cheaper to rent can be a false economy if it adds even a few minutes to a day’s shoot.

This is why the same long established names — Sony, Canon and Arri — dominate the hire market; it is not blind brand loyalty, it is simply a matter of economics.

It’s a simple truth that stills cameras far outsell video cameras and, because of this, as features are incorporated that are specific to pro video, the price increases significantly.

Some people seem outraged by the notion that manufacturers might limit features on their stills cameras so not to eat into the sales of their video cameras or that lower priced cameras are ‘crippled’ by disabling functions present on the higher price models.

Well, swallow your anger. Like it or not, manufacturers exist to make a profit and disabling functions is really just a method of spreading R&D costs across a range of products, just as you might pay more money to unlock certain features on a piece of software or an extra licence fee to unlock a hardware option.

So why does any of this matter? I think it goes to explain some strange anomalies in the world of video cameras — like, how a $15k camera is marketed with an $800 lens, and how Sony can still sell an HD camcorder at almost 10 times the cost of one of their own 4K camcorders. And the curious fact that an inexpensive DSLR kit is more suitable for low-budget features and commercials than documentary or news.

Although the DSLR revolution has brought enormous benefits, it has had an effect on not only how we evaluate costs but it has changed the way video cameras are designed and marketed and thus the way we make films.

In the next part, I want to examine these implications with regards to lenses, formats, picture quality and ergonomics.