If we can curve screens, why not curve sensors?

Replay: A Microsoft team has solved a whole range of fairly difficult challenges and created a curved image sensor that holds out the promise of solving the field curvature problem once and for all. 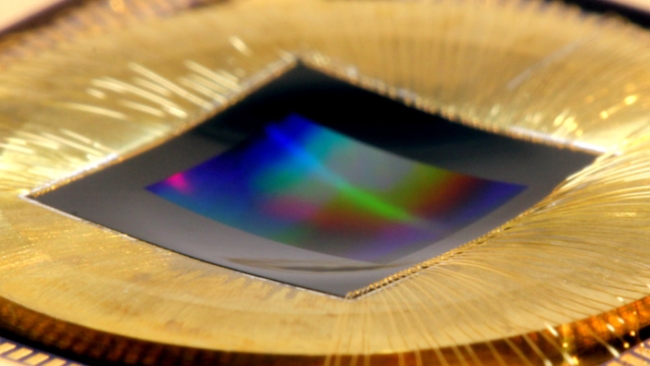 A Microsoft team curved this image sensors to produce an almost 24-degree angle of view.

We're used to the assumption that things a certain distance in front of the camera are in focus. Similarly, most people are aware of the concept of back focus – the idea that the lens should be a very well-controlled distance from the sensor in order that the scene looks sharp. That's instinctively easy to understand, but there's a problem: if we want a number of things to all be the same distance from a lens, then they're going to be arranged in an arc, not a straight line. Put a row of actors in a straight line in front of a camera and the two on the outside end are further from the lens than the ones in the middle. This makes life very difficult when we are, for instance, trying to shoot a flat object such as a painting.

What we're describing here is referred to as field curvature, since in most lenses the point at which objects are in focus is curved. In real-world lenses, optical designers work hard to avoid this. Even so, it's almost always something of an issue, especially in zoom lenses, those with very short focal length, large sensor coverage, short flange focus distance, or other complex designs, especially if there's also a desire to avoid distorting the image. The same issues attend projection, which is (at least one reason) why the largest cinema screens are sometimes curved in at least one axis. The plane of focus is almost invariably a compound curve.

Until the last five years or so, the idea of curving an image sensor was, to put it mildly, difficult. An image sensor is made in the same way as any other integrated circuit, on a large, silicon wafer. Silicon wafers are very flat. Huge effort is gone to in order to make them flat. In fact, the chemical-mechanical planarization process (CMP, in the business) is a significant part of semiconductor manufacturing. It's designed to create an extremely flat surface so that the very (very) fine details of the device's electronics can be photographically created, and all of those details must be in focus. This process is so critical that special lamps emitting shortwave ultraviolet light are used, because visible light has too long a wavelength to create an image of features that small.

When you're worrying about light itself being too big, you know you're talking about a precision process.

If we could make a curved sensor, though, some of those issues of lens design could be made a bit easier. The retina in the back of the human eye, after all, is curved. And it has been done, if only very slightly, by making the silicon-based sensor very thin, so that it can be shoved into a slightly dished shape against some sort of mould. Unfortunately, silicon is subjectively rather glass-like and is about as happy with being stretched and bent as instinct suggests, and the amount of curvature which can be achieved by this technique is limited.

However, things look set to improve. A recent announcement from (of all organisations) Microsoft involves improvements to this technique in which a relatively small 1/2.3” sensor was curved to a radius of about 18.7mm and thus covered an almost 24-degree angle of view. The researchers state that their technique (which seems to boil down to “pushing on it very carefully in an extremely controlled way”) is also applicable to larger sensors, and involves fixing them into a precision-made mould with solder or a heat-curing epoxy adhesive. The full details, including the technical paper, are here.

This is not entirely new, as Sony was discussing cameras with slightly curved sensors as far back as 2014, but the degree of curvature is an improvement. One significant good point is that the sensors used are commercial, off-the-shelf types, not something specially made at vast expense using special techniques. That's not to say that the special curving process is not a vastly expensive special technique, but it's a promising start.

The researchers state that lenses for curved sensors should offer much-improved performance despite being simpler, lighter, and therefore cheaper. The paper refers to tests with a custom-made f/1.2 lens with a 55-degree field of view projecting a 7.6mm image circle. Again, this is a smaller image than we're used to in cinematography, but the results are encouraging, being described as “almost double the sharpness at every field angle, despite having one less element and two fewer aspherical surfaces.” A design study comparison is given for a larger, 43mm image circle, suggesting that a lens with three fewer elements could still offer 1.2 times the MTF.

Whether this is a universal solution to all geometry and flat field issues is another matter. The ideal degree of curvature is to some extent dependent on the angle of view, making zoom lenses, or even swaps between primes of different focal lengths, tricky. At the moment this seems to be aimed mainly at fixed-lens cameras where the glass can be matched closely to the sensor. Whether we might one day see curved sensors for cinematography is a matter for speculation, but for now there are promises of improved sharpness, uniformity of illumination and sensitivity (by ensuring all the photosites are pointed toward the incoming light.) As with so much original engineering, it's a way to minimise the impacts of a compromise and a welcome incremental improvement in what can be achieved.