Preventing drone fatigue: how to get better shots 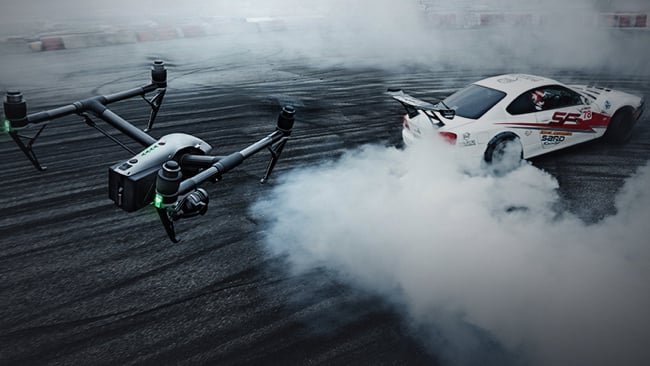 Low level flying: a bit riskier than the 400ft shot but visually a lot more impactful

Drone filming was and still is a big thing. But just like GoPro, once the novelty has worn off, interest can wane.

We are now approaching 3,000 odd certified pilots and companies in the CAA database in the UK, with equivalent aviation authorities experiencing a similar exponential rise in other countries too. Seeing yet another endless set of mounted aerial shots can certainly become monotonous, but we shouldn’t forget what we are really dealing with here: a cinematography tool.

To use an analogy with other filming kits, it might be novel to own your first camera jib, Steadicam, or gimbal. But while they are all cool toys to use, you wouldn’t use them for every shot. One of the reasons that we see many of the same types of shots from drones is because they are so easy to use. Once up in the air, it is tempting to make up shots on the go, particularly if you want a good number of shots of any given area.

However, to get the best use out of a drone will take planning. All a drone is, effectively, is an aerial gimbal. You wouldn’t just capture shots randomly with a ground-based gimbal and the same applies to using the drone.

Shots from 400ft up might look impressive to begin with and they still have a place, but they very quickly become repetitive. Just like their ground-based counterparts, shots from drones also benefit greatly from depth cues such as parallax movement, as well as foreground and unusual angles. It may be up in the air, but you still need to compose the shot.

Often this means flying the aircraft at a low level or fairly close to objects. These specific points mean that the best shots do require some degree of planning and practice, to pull off well with minimal risk. They also require deft flying skills, which will come with time. Just like standard cinematography, all the same rules/guidelines apply. The idea of tension and interest through reveals, best use of light direction, top and tail considerations for editing, and how the shot flows in the edit. For example, there is no use filming an impressively lengthy shot if the edit only works well with a very short segment of it.

It may seem a bit like teaching a granny to suck eggs given the number of camera ops who read RedShark, but it is often surprising how such ideals are forgotten in favour of very similar looking forward-facing flyover style shots. Planning a really nicely executed aerial shot can be quite tricky and doing something original even more so. As with standard filming, your subject matter and light are all important. Light directionality is critical, more so than with ground-based filming, because drone shadow is a big no-no, and with the smaller drones like the Mavic, dynamic range is at a premium. You also need to take into account whether there is a risk that personnel involved in the flight could accidentally end up in the shot — which is a particular consideration with 360 fly-arounds.

The need for speed

One other aspect to bringing your thinking around to much more of a cinematographer than a drone pilot is how to use the speed of the drone. Not all aerial shots need to move. Remember that after all, the drone is a way of obtaining shots that may not otherwise be possible. Movement is not a requirement to achieve this. But if you do have movement in your shot, it doesn’t have to be at top speed either. Just as you wouldn’t ask a Steadicam operator to run all the time, often the most subtle movement is the most effective way to convey the shot in question.

There is always the temptation to make drone shots draw attention to themselves, be it through speed or by sheer height, because the client may be paying a premium to include them. But if you think like a cinematographer, you will need to change your mindset to one that asks the question: “What is the most effective way to portray this shot or image?”

Sometimes, this might mean eschewing the use of the drone altogether! But if you can change your way of thinking so that your aerial shots are simply an extension of your toolkit and you give more meticulous thought to what you are trying to achieve, your results will hopefully start to fly (ahem!)