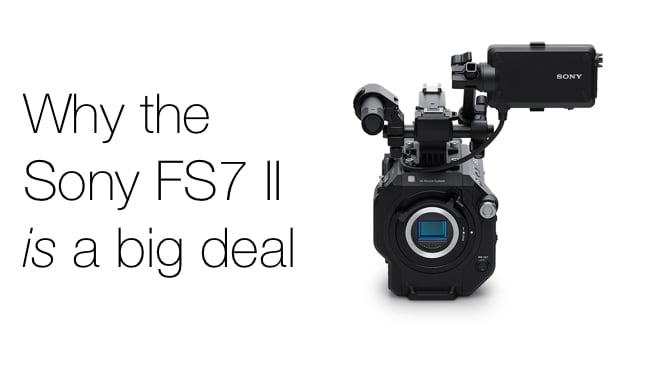 The Sony FS7 II: That extra $1500 delivers a lot of essential functionality

There have been a lot of lukewarm comments about Sony’s FS7 II recently, but Ned Soltz begs to differ. If you are mounting heavy lenses, wanting to shoot with precise DOF consistency or shooting HDR for broadcast standards, then the FS7 II is a big deal.

Sony sources tell me that the company is poised to ship the first batch of its new FS7 II cameras and 18-110 f/4 servo zoom lenses. We’ve previously reported on the FS7 II from its announcement at worldwide press events last fall to hands-on tests by early users.

Since the initial product announcement reaction has generally been muted, but we’ve been monitoring comments on various discussion forums and by other influencers and bloggers. A few informal calls to dealers and rental houses round out pre-release coverage.

Several of the blogs and online sites have minimized the differences between the FS7 and the FS7 II noting that the $1500 price differential does not deliver sufficient value when the internal recording capabilities remain the same.

I would strongly beg to differ.

At least two rental houses I’ve contacted await their shipments enthusiastically. The primary new feature that rental houses crave is the locking E mount with the more robust construction. The FS7 has been a very popular rental item for a wide range of productions. I know. I placed my FS7 on consignment with a major rental facility when I was away for summer 2016 shooting primarily stills and limited video on mirrorless cameras. That FS7 has been rented continuously ever since.

I do know that my FS7 lens has been used with a Fujinon Cabrio via PL to E mount adapter and that other cine lenses have been attached. The rental houses universally say that they will be much more comfortable mounting big heavy glass on the FS7 II in the light of Sony’s contention that this new mount can carry as much weight as an F55.

Shooters who have had the opportunity to test the pre-release version as well as current FS5 operators eagerly await the Variable ND function. One DP who owns both the FS5 and FS7 tells me that the Variable ND feature on the FS5 has given him much greater consistency in shots. He is able to set a constant aperture and then control the exposure via the Variable ND. In that way his depth of field is consistent.

There are incremental features which make the FS7 II more useable but I would agree that by themselves do not constitute sufficient reason to upgrade from the FS7. The new viewfinder and loupe set up is exponentially easier to adjust as is the redesigned grip handle. XQD cards are easier to remove and the power button has an LED indicator. They are evolutionary but it is always possible to buy a third-party viewfinder and rods as well as swap out the grip for a third-party enhancement.

Rec 2020 is great for TV shooters heading to HDR but if shooting in CineEI mode, the Sgamut2 and SGamut3 color gamuts deliver a wider color space than Rec 2020 and can be converted to a Rec 2020 space in post. But for those shooting for HDR delivery in Custom Mode, the Rec 2020 color gamut is essential. And we don’t know if or when it will come to the FS7 via a firmware update.

If you are mounting heavy lenses, wanting to shoot with precise DOF consistency or shooting HDR for broadcast standards, then the FS7 II IS a big deal and well worth the $1500 increment over the FS7.

As a result, I’m skipping the journalist short loaner period and jumping right in with an order. More to come when I receive my camera and 18-110mm lens!