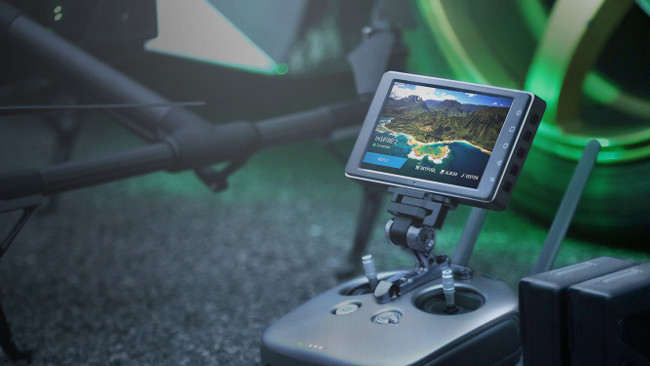 While the new Inspire 2 and Phantom 4 Pro were causing lots of initial excitement after their announcements, DJI has got another ace up its sleeve that fell somewhat below the radar: monitoring.

Filming with drones always throws up monitoring issues. Even with a sunshade, it can be incredibly difficult to view the tablet or phone devices that are used to display camera framing and telemetry information, even on a fairly dull day.

DJI has therefore decided to expand its capabilities to monitor production. The new CrystalSky monitor range offers an ultra-bright solution to the problem of using tablets. The touchscreen displays are available in both 5.5" and 7.85" models and natively run the DJI Go drone control app.

Dual SD card slots mean that the monitors can also record H.264 and H.265 footage live from the aircraft at up to 1080 resolution – useful for backups in case of aircraft loss. But they can also playback 4K footage for location review of shots. An HDMI port allows output to other devices as well, such as FPV goggles.

As if this wasn’t enough, 4G dongles can be attached, which are forthcoming from DJI itself, as well as allowing connectivity to external storage via USB-A. Micro USB and USB-C ports are also featured. A replaceable rear mounted battery gives a claimed 5hr run time on the 7.85" model and up to 6hrs on the 5.5" version.

Price and release date are both TBC.