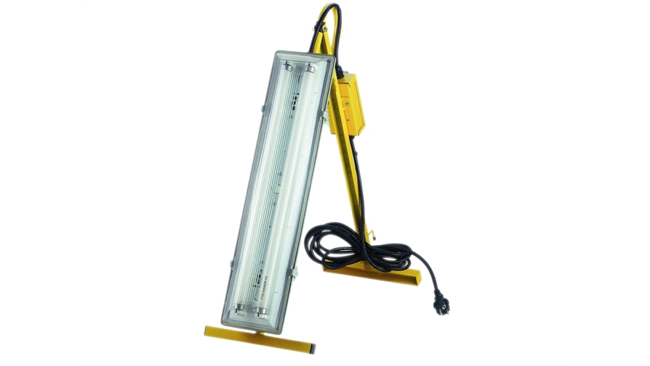 RedShark Replay: Phil Rhodes is your guide to using the local hardware store as a source for all your low-budget lighting needs.

So you're shooting a short film, a spec commercial, or YouTube extravaganza. Amazingly, you don't have any money. It probably won't surprise you to know that you're not alone, and that a lot of people have found ways of doing things on the cheap. Now, cameras are difficult to get for nothing, although these days, with a bit of skill, it's possible to shoot on a cellphone and get half-reasonable results. Decent cameras have never been cheaper. And no, we're not going to take the position that modern cameras can shoot by the light of an anaemic candle, because that's not true, especially the cheaper options. We need some photons, but that's okay; we can get some good-quality ones without spending a fortune.

The other problem is in lighting control. A lighting truck on a big shoot is full of lights, of course, but it's also full of stands, and flags and nets and scrims and bits of diffusion. Making the light go where you want it and not go where you don't is a job big enough that entire departments of people exist to do it. Light control measures are even useful when no actual lights are in use – day exteriors in the full sun can be made to look surprisingly acceptable just by flying diffusion overhead. That's achievable too; you can do it with a bedsheet, so long as you take measures to ensure it doesn't catch fire.

So, let's have a trawl around the local DIY store, and see what we can drag up. We'll be using as our example the wonderful orange-clad people at the UK's best-known DIY chain, but Americans can probably assume it's Home Depot (they even look pretty similar). Better yet, services like Craigslist or Freecycle can turn things up very cheap, and eBay can work for things where the value of the item is bigger than the cost of shipping it. Quite often, though, in this piece, we're going to be going for solutions that are so thoroughly inexpensive that local pickup is the best idea.

There are massive caveats with almost all the approaches we're about to talk about. They'll take a bit longer to set up than real gear and there's limited (though not quite zero) access to high-efficienct, low-heat options like LED and HMI. Particularly, there's a need to be very careful about the safety issues. Filmmaking at all levels is no stranger to the Rube Goldberg solution: after all, why does speedrail exist? Still, don't rig things overhead using duct tape and clothespins, don't take indoor electrical equipment outside in the rain, do not fall into the spike pit while adjusting a wayward flag, and naturally, do not be on fire.

Yes, I have done all of the things detailed herein, and no, I have no shame.

Let there be light

Perusing the web will show up all kinds of work light options that initially look good for filmmakers. The most tempting are probably LED work lights. LED, after all, is a desirable and expensive new technology, and our target DIY store has this 23-watt device for an attractive £35. At this price, you might wonder how bad it can be, and the answer is: pretty bad. They're absolutely great as work lights, of course, being rechargeable, battery powered, and therefore super-convenient. However, most of this sort of thing will make your cast look like cadavers. Don't buy cheap LED work lights for filmmaking unless you have a very specific role in mind for them.

Instead, ponder something like this. At the time of writing, these things were reduced to clear and almost ludicrously inexpensive, and they produce light of very much the same colour quality as the most expensive movie light in the world. They're a blunt instrument, of course; they fire light all over the cosmos and will require a certain amount of flagging and other control measures, but more of that below. Of course, they're also a great way to warm up a chilly location, but on a budget, compromises are necessary. You can run at least two of these 400W examples from a single wall socket anywhere in the world, and very possibly up to four even in places with 110V mains. Know where the breakers are, though.

There is another alternative which may appeal if you're in a place where summer is hot and air conditioning is inconveniently noisy: fluorescent. In general, any fluorescent tube fitting that takes a commonly-sized tube can be pressed into service. They can sometimes even be dumpster-dived, but naturally, all of this may require basic electrical knowledge for which you, of course, are responsible. The things to look for are an electronic rather than magnetic ballast, which will reduce or eliminate problems with flicker, and something that takes 18, 36, or 58-watt tubes. Practically any type of fluorescent tube is available in these sizes.

The tubes that come with most fittings will have much the same problem as the cheap LEDs, so dispose of them at your municipal lamp recycling facility (they contain mercury, which is toxic) and replace with Philips Master series tubes. Use TL-D 90 Graphica 950, for daylight, or TL-D 90 De Luxe 930, for tungsten. The tungsten isn't quite as bright as the real movie fluorescents, but it's very usable and the daylight is fine. A lot of plasterers' lights use two 18W tubes.

Finally, although we've agreed not to use cheap LEDs, do look at cheap LED flashlights. They'll often look bluey-cyan on camera, but that can be interesting for backlights and the lancing beams of marauding sci-fi robots. They're very intense and good for provoking lens flares – just don't try to key a scene with one.