DJI wants to stabilise your smartphone 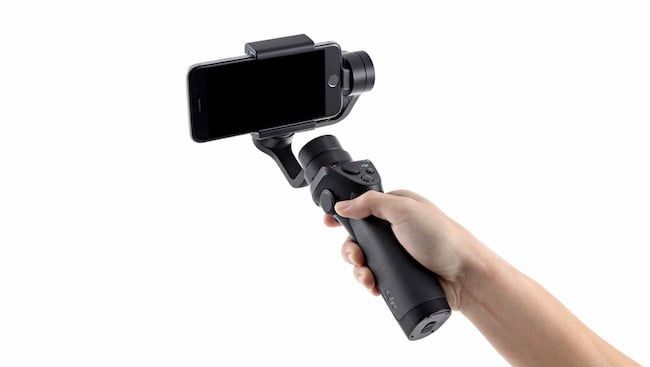 The new Osmo Mobile can accommodate most modern smartphones

DJI has opened up its Osmo technology to make a handheld three-axis gimbal stabilisation mount for smartphone users.

The new unit is linked to your phone via Bluetooth, which means the company has been able to build various different functionalities into the trigger control, allowing users to access various modes: double-tap for re-centre, triple-tap to change between front and rear-end cameras, long press to locking gimbal direction.that sort of thing… Sensitivity, invert pan or tilt, or even over-riding the gimbal to only move in one direction can all be set. For camera settings such as ISO, shutter speed and white balance, users will have to use the old-fashioned method of jabbing at the screen with their fingers.

The company says that the Osmo Mobile’s three-axis stabilizstion technology increases precision down to 0.03 degrees of accuracy. Couple it with DJI’s SmoothTrack technology, which compensates for shaking and small movements, and you;ve got an interesting new way of capturing long smooth shots.

In combination with the DJI GO App, photos and videos can be live streamed or shared instantly on social media, plus of course the app brings a decent amount of other tools to the party, such as timelapse, panorama, long exposure for still photos and more. The company’s ActiveTrack has also been ported over, allowing users to simply tap the screen to automatically create framed shots of objects in motion.