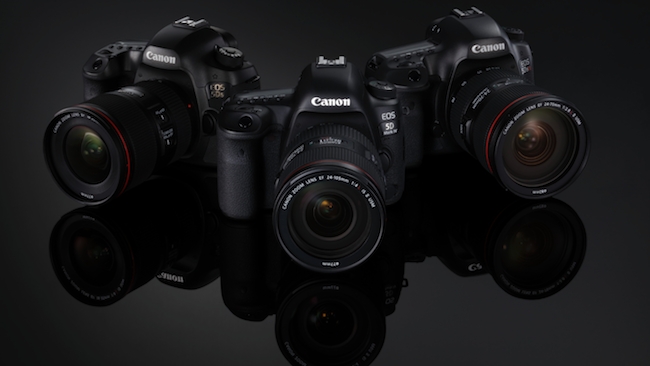 As widely predicted, Canon has released details of its new $3499 / £3399 street price EOS 5D Mark IV canera body, and the official spec sheets tally with what has been leaked so far — in other words, that 4K 30fps MJPEG rumour is true.

There are a couple of new lenses to and we’ll get into the detail of what all this means for Canon’s video aspirations and very probably the whole subject of using stills cameras for video once more in another post, but for now the company looks like its drawing clear stratifications between the video capabilities in its range. You want 4K 30fps? Then this is what you pay (and yes, those prices are true - the post Brexit exchange rate is proving to be a bit of a punisher for those in the UK). You want 4K 60fps? You’re going to have to step up to a $5999 1DX II and start buying CFast cards.

So for the moment let’s just stick to what we have in front of us, and that’s a camera with several decent evolutionary updates over its predecessor, the much-loved Mark III.

It also has decent lowlight capabilities (ISO 100 to 32000, expandable from 50 up to 102400) and is the first in the EOS range to premiere Canon’s Dual Pixel RAW file format, allowing photographers to fine-tune images in post by adjusting or correcting the point of sharpness, shifting the foreground bokeh or reducing image ghosting.

We used the phrase ‘evolutionary upgrades’ and that’s very much what this camera seems to be: a prosumer stills-oriented unit with many of the latest technological advancements in photography housed within its 800g body. And that's no bad thing.

The £1129 EF 24-105mm f/4L IS II USM is billed as an ‘everyday’ lens, and certainly the 24-105mm focal length and f/4 aperture is ideal for a variety of scenes, subjects and lighting conditions. An improved 4-stop IS and a new video design EDM provides quiet aperture adjustment during movie capture.

The £2349 EF 16-35mm f/2.8L III is a bit more high end, and with its focal length and maximum aperture is more aimed at those working close up or in low light.

And finally, for today, there is also a new firmware update for those shooting 4K 60fps with their EOS-1D X Mark IIs. The new update adds IPTC support and LCD colour tone and also improves the network and GPS functionality. As with everything else, it will also be available in September.

And for more on the Canon video debate, have a look at: The original EOS 5D’s place in video history is that it didn’t shoot video at all.