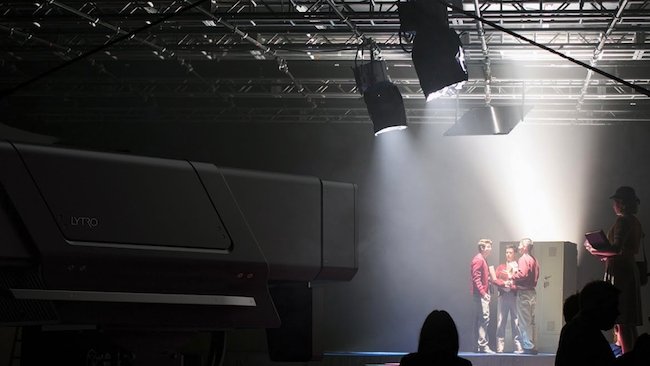 Once a year the 1700-seat Auditorium at the centre of the Amsterdam RAI is transformed into a truly state-of-the-art cinema so that IBC can debate all the hottest topics relating to the film industry.

Over the past few years the IBC Big Screen Experience has become central to not just the IBC Conference but to the whole show itself: a spectacular demonstration of the absolute leading edge of cinema capture and exhibition coupled with discussion, debate and masterclasses that look in detail at the future of the format.

The current state of the art though is represented by the audio visual system that is installed in the 1700-seat Auditorium for the duration of the show. And this year, that means HDR. For the first time, High Dynamic Range projection will be featured and provided by long-term supporters, Dolby Laboratories. In addition Dolby Atmos immersive audio will be featured again powered by QSC audio.

That is just the start of the technology on offer though as several panel sessions and demonstrations are planning on uncovering the stories behind some of the most interesting in our industry.

You can have a look at the full programme here but suffice it to say that sessions look at the art and science of motion capture, the art and technology of virtual reality storytelling, virtual sets and virtual production, laser production, immersive audio, HDR (rather obviously) and more.

It’s worth marking your card for two of them in particular though. In a seriously big name keynote, director Ang Lee will be taking about his experience shooting the upcoming (and hotly Oscar-tipped) war film 'Billy Lynn's Long Halftime Walk’ (10.00, 12 September). Following all the fuss about Peter Jackson filming The Hobbit at 48fps, this ups the stakes even further and is the first production being filmed at 120fps 4K — or, effectively, in slo-mo as we used to call it. This will be followed by a technical deep dive into how it was all done which will undoubtedly prove to be fascinating.

Also set to be fascinating is the introduction to Lightfield camera technology slated for 09.30 on 10 September. Subtitled ‘Technology that is indistinguishable from magic?’ this will look in detail at how it all works, showcase some Lytro Cinema Camera footage, examine some of the creative techniques it make possible, and generally push the envelope so far that it bursts.

The fact that it’s followed by an examination of the use of synthetic (ie post production) shutter with high frame rate footage simply highlights the technical chops of the Big Screen Experience. What’s more, it’ s all free. While the rest of the Conference sits behind a fairly high paywall, all of the Big Screen Experience sessions are free. What’s more IBC usually finds a blockbuster or two to showcase all that cinema equipment off to its fullest potential and its free screenings have become somewhat legendary over the years as the first place people get to see new technologies such as laser projection or experience immersive cinema audio.

And if you fancy winning free flights and accommodation to IBC Rising Stars in Amsterdam, simply click here to register and be entered into the free draw!