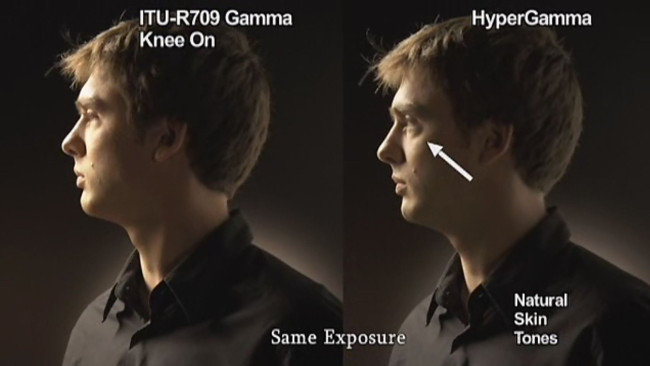 Replay: Here's a practical primer on the differences between standard and log gamma, including what you should protect while shooting in either mode. By Alister Chapman.

With so many cameras now including log gamma curves as well as standard gamma curves, it's important to understand the differences and how that might affect the way you shoot.

If you have done even the most basic of homework on log, I'm sure you will be aware that log gamma curves are designed for a two stage workflow, where the final look of your images is created in post production, rather than in the camera. But that is only a small part of the difference between using a standard gamma curve and a log gamma curve.

Before going in to what makes log special, first let's take a look at a couple of the common characteristics of a standard gamma curve, gamma curves like Rec-709, perhaps one of Sony's Hypergammas or Panasonic's Cinelike curves. All of these curves set out to capture an image that more-or-less OK straight out of the camera, what I like to call WYSISWG shooting (What You See Is What You Get). This means creating an image in the camera that looks great on a conventional TV set, so it has to have some compatibility with the display gamma curve, which with a HD TV will be Rec-709.

The Rec-709 standard defines a display range of about 6 stops. So a camera that has a 'true' Rec-709 curve can only capture 6 stops before the image clips. But 6 stops is not very much, so the vast majority of video cameras will include some form of highlight compression to squeeze some extra dynamic range into the highlights. The most common way to do this is with something called the 'knee', a form of hard brightness range compression that typically kicks in at a fixed rate above 90%.

This hard knee is one of the things that gives video it's distinctive video look. The highlight compression dramatically reduces contrast in anything brighter than the knee's onset point (typically 90%, but often can be adjusted). So bright highlights look ultra flat and shiny bright spots on faces and heads have no texture or detail and just become smudges of color. Because of the unpleasant way anything overexposed looks, TV cameramen will typically shoot to avoid overexposure at all costs.

More advanced conventional gammas like Hypergammas or Cinelike curves have a more gentle form of knee that introduces highlight compression at a gradually increasing rate. This gives what we often refer to as a highlight roll-off. This highlight roll-off is often much more natural-looking than a hard knee and, in many ways, mimics the way film responds to overexposure. But even with these curves, we still don't want to overexpose and a saying often heard when shooting with a conventional video camera is "protect your highlights." This means exposing very slightly darker than might normally be considered correct to ensure that nothing in the shot is too bright.

Log gamma curves were originally developed as a way to transfer film to a digital intermediate back when storage was frighteningly expensive and 10-bit image data was cutting edge. But from the outset, log gamma curves, such as Cineon, were designed to cope with very large dynamic ranges.

In the real world, every time you make a scene brighter by one stop you are doubling the amount of light. So to record a scene 1:1 as it truly is, every time you add a stop of dynamic range you would need twice as many code values. With a 10-bit codec, it simply isn't possible to record more than around 8 stops in this way. So something else was needed and that something else was log.

Log recordings work by recording each of the brighter stops with the same amount of data, so as you go up in brightness, instead of needing more and more code values, each additional stop is no bigger than the one before. Now it becomes possible to record up to around 16 stops with 10 bit data in a manner known as 'perceptually loss-less'. This doesn't mean that log recordings are loss-less, because they are actually very lossy; what it means is that the viewer should not be able to perceive that loss (the reality may be different depending on many factors, that's perhaps the subject for another article).

On the other hand, in the shadows, to save valuable code values to help get that extended dynamic range, log curves roll data away into the shadows. The very darkest stops may only record with just a few code values. Meanwhile, the mid-range and highlights have much more data. This is almost the complete opposite to conventional gamma curves.

Remember that, with conventional gammas, camera operators will often shoot to "protect the highlights." With log, you need to do the opposite – you need to shoot to protect the shadows. Underexposed log will lack data in the shadows and darker parts of the image; this makes it difficult to grade and work with in post-production. Meanwhile, brightly-exposed log (I don't want to say "overexposed," but that's what I mean) will have great data in the shadows and mid-range and even the brightest highlights will still be OK, as they contain as much data as the mid-range.

So, when you are shooting with log, don't worry about your highlights; instead, worry about your shadows. A little bit of highlight clipping isn't going to hurt when shooting log, as normally you're talking about things so bright in the scene that you will never be able to accurately reproduce it on a TV screen or monitor. For old school TV camera operators, this can be a hard thing to do. If like me, you have spent 20 years of your life protecting highlights, switching to protecting shadows and largely ignoring highlights feels wrong, but trust me, that's what you need to do to get the best out of shooting log. Get the mid-range right and the highlights will look after themselves.