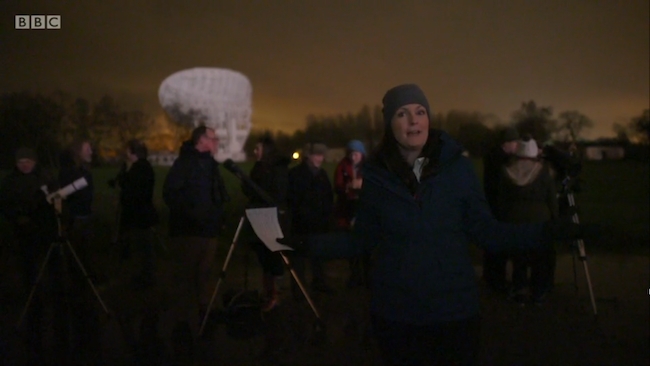 Prof. Lucie Green presenting to camera in the dark

Our countdown reaches number 4, and if you wanted an illustration of exactly how good Canon’s 4 million ISO ME2OF-SH camera is, this still from the BBC’s Stargazing Live was recorded in a muddy, dark field and broadcast live in January 2016.

Stargazing Live, which is broadcast live from the illustrious Jodrell Bank radio telescope in Cheshire in the UK, has become a bit of an institution in recent years with its mix of space stories and astronomy features. One aspect of it has always been a bit of a problem for the production team though: how to depict people in a field looking at the stars with telescopes (which needs low light) on TV (which typically needs lots).

The solution over the years has, of course, been using specialist low light cameras, and viewers have become very used to seeing their noisy black and white images on the screens.

This series though, the team has started using the Canon ME2OF-SH and the results, as you can see above, are remarkable, with colours clearly visible in a remarkably noise-free picture. This was shot live, in a muddy, dark field, with low cloud cover and no moon. It probably wasn’t pitch black, some very subdued lighting tends to be used by the production team so that people don’t start tripping over cables and all the other ephemera that comes alongside a major OB, but it wasn’t lit in anything that you could call the conventional sense.

The result was that the practical astronomy sequences really stood out. And in a programme that regularly features live footage from the ISS, that isn't easy.

Tune in to watch it in action again today and tomorrow night, 21.00 BBC2, and you never know, they might even have some clear skies over the next few days. The show is also available, with the usual geographic restrictions, via the iPlayer here.