Why flicker happens and how you can avoid it 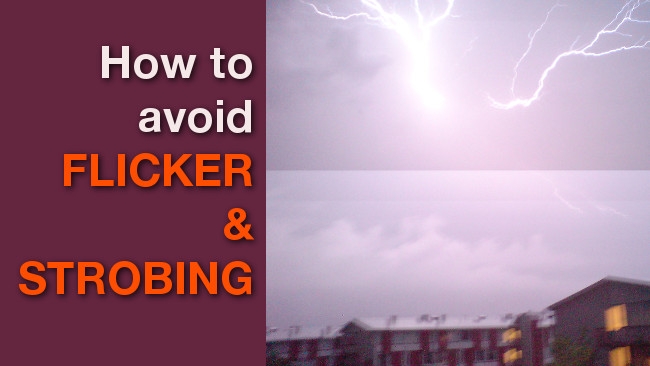 How to avoid flicker and strobing

Phil Rhodes provides a detailed lesson on flicker and strobing, including how you can avoid these problems on your next production.

Flashing lights are common in movies. Whether it's an excited press pack and accompanying camera flashes or the suggestion of emergency vehicles parked outside, it's commonplace to depict light sources that only exist for one frame or less. Of course, there are problems with this and some misunderstandings exist as to the best solutions. Just making flashes longer, as often suggested, isn't enough.

Film and TV cameras produce, at best, a simulation of motion. That simulation is good enough for many purposes, but it's been known for years that it can start to fall apart when faced with things that happen quickly. Even the issues of rolling-shutter cameras aren't entirely new. Many stills cameras have physical shutters that move from the top of the frame (thus the bottom of the picture) to the bottom and there's a famous black-and-white photo of slightly diagonal racing cars from the early twentieth century to prove it.

One of the first things to cause flicker or strobing issues was probably the fluorescent tube, invented (surprisingly) just in time for WWII. It reacted to the alternating mains current fast enough that the light output actually faded up and down fifty or sixty times a second. Ideally, the light output peaks once every time the alternating current of the mains goes positive, and once every time it goes negative – 100 times per second, in a 50Hz area. 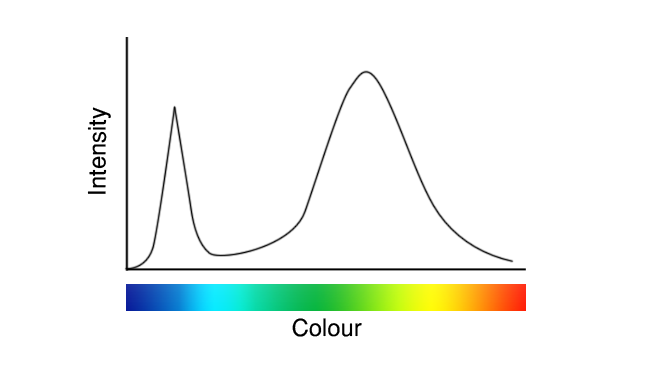 If we superimpose another line showing when the camera's shutter is open, we can see why there's a problem. Not every frame receives the same amount of light – notice in this diagram that the red areas, representing the 1/48 second periods that the camera's shutter is open, gradually move out of synchronisation with the blue line representing light output in a 50Hz mains area. 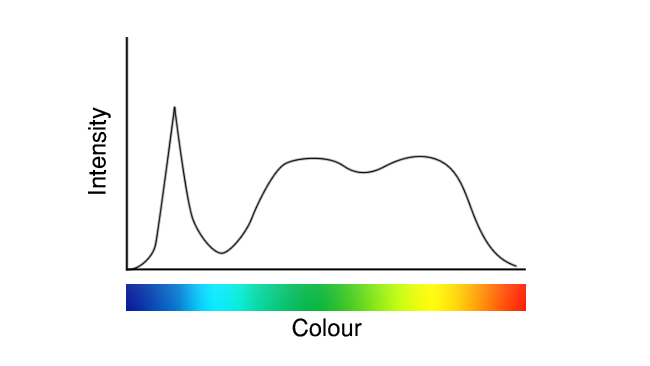 We can work out the resulting flicker rate as the absolute value of F × X - 2M, where F is the frame rate, X is the smallest whole number that we can multiply it by and still keep it smaller than the mains frequency, and M is the mains frequency, which we multiply by two, because there are two peaks, and thus two pulses of light per AC mains cycle. Plugging in the numbers, we see that 24 × 4 – 2 × 50 = -4, so the light will flicker, or perhaps pulsate, four times a second (an exercise for the reader is how this works out with 24fps shooting in 60Hz countries – the clue is 23.976. Answers on a postcard, please).

It's possible to adjust the exposure time of the frame so that the amount of light is roughly the same per frame, but this rapidly becomes tricky, especially if we want to shoot at unusual frame rates. For this reason, modern fluorescent and gas-discharge lighting (including both kino-flos and HMIs) generally take one of two approaches. Fluorescent tubes often work at very high frequency, so that there are many pulses of light per frame to the point where missing one of them doesn't make a visible difference to the brightness of the light. This diagram is rather idealised; in reality, the light pulses even faster than shown here: 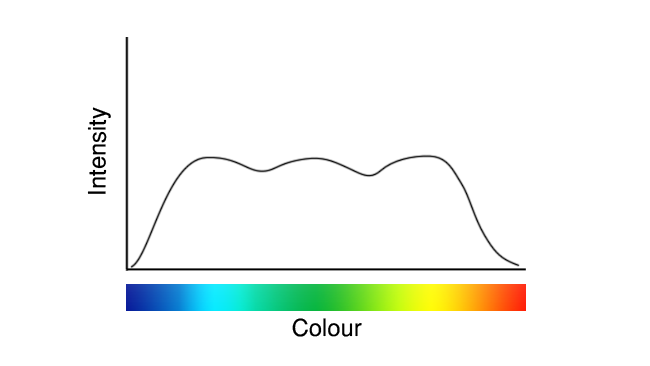 A solution (and its complications)

The most obvious solution is to use direct current to power lights; electricity with no pulses in it. This work OK for LEDs, but really high power options suffer shortened life and strange colour temperature issues when used like this. In an effort to reach a compromise, things such as ceramic metal halide and some types of HMI sometimes use fairly low-frequency square wave output, so the time during which no light is produced is extremely brief (the gap is emphasised here for clarity; in reality, it's much smaller): 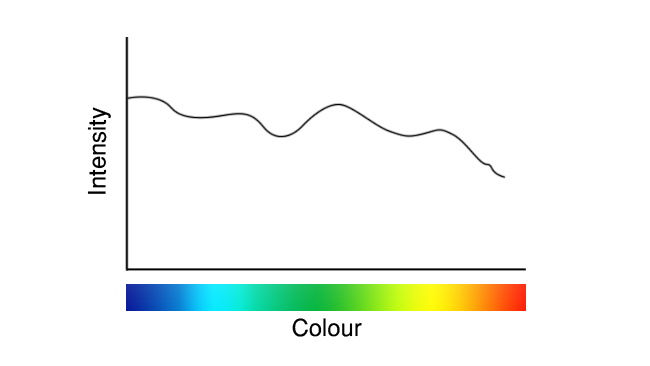 These approaches are mixed in some current HMI ballasts, where the lamp head itself can start to emit noise when driven in certain ways; the choice is often between flicker-free operation and an irritated sound department.

We turn now to the real motivation behind this piece: the problems of shooting very short-duration flashes of light. This includes LED strobes, but particularly xenon flash tubes, which output extremely brief bursts of light – so brief, in fact, that they can be used to photograph bullets in flight. Similar issues come up with things like muzzle flash, which is also pretty quick. There is, of course, the risk that these things will be missed entirely or at least greatly reduced in brightness, because they just don't occur when the shutter is open, which is easy enough to understand. 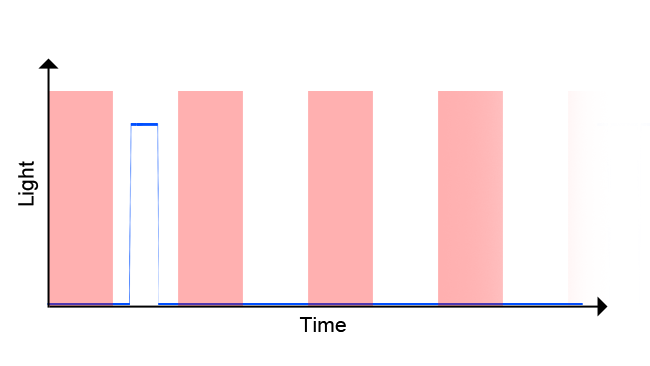 A more insidious problem is that of flash banding and it's here where the misunderstandings become more common. In the following diagram, the green area shows the time during which a modern, rolling-shutter camera is reading out its sensor. Anything that changes brightness during that period can create flash banding, as we discussed in relation to the trailer for Terminator Genisys. 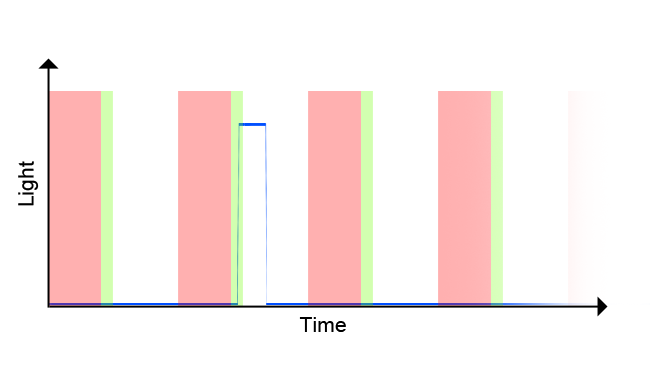 There isn't a solution to this other than ensuring the timing is right, which is something that can only be done with rare and specialised electronics. It's often suggested that using a longer-duration flash will help, but that's only partially true: we can make the flash longer than a frame, which ensures we'll see at least part of it, but if the brightness changes during the readout time, we can still see flash banding. 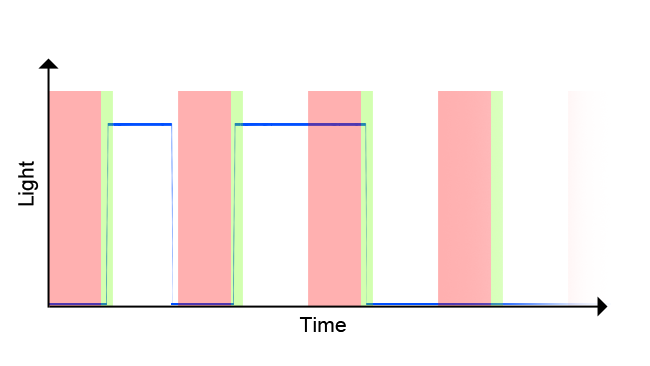 Worse still, flickering light sources can cause horizontal banding if their brightness changes during the readout period. A high frequency light source such as a modern fluorescent tube can fade up and down several times during the readout, creating horizontal banding, and these problems defeat some of the high-frequency or square wave anti-flicker measures that have been implemented in the past. Sufficiently smart strobes can (or at least theoretically could) read a video output from the camera and time flashes accordingly, but that's rarely done. Global shutter is desirable for all kinds of reasons; in the meantime, though, it's important to be aware of this as a continuing problem area.