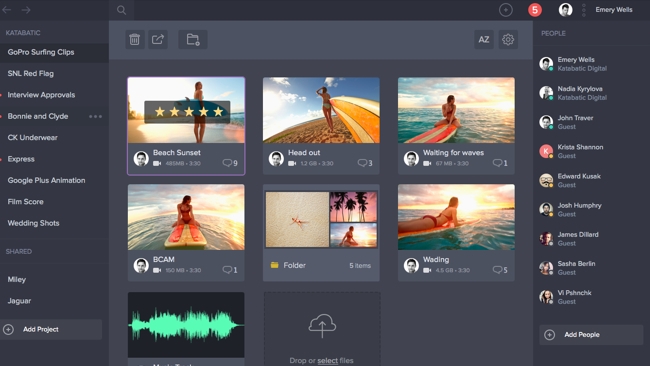 Work with video as if you were in Google Docs!

The Cloud has much to offer video professionals and now, with faster broadband speeds rolling out (still painfully slowly in some places!) it is becoming feasible to work with and share video just like you can with documents in Google Docs.

One promising looking startup is Frame.io. Just in the process of being launched, it looks like a very serious effort, and by that, we mean that people might actually want to use it.

Designed as an online collaboration tool, it allows users to upload video to Frame.io, at which point the clever stuff happens. Material is transcoded in to a web-friendly HTML5 format. You can then see it in your browser and manipulate it pretty much as if it were on your desktop.

You can organise clips buy dragging and dropping them, and scrub through them just by hovering over them.

It’s possible to set up groups of users and keep access to projects limited to only those who are authorised to view them. Participants can comment at individual points along a clip’s timeline and even draw within a frame.

This does look like seriously usable software. It’s not the first - Sony’s Ci is similar in many ways - and there are more mature services out there, like IO Gates , which is geared for serious corporate users who want to outsource their IT infrastructure.

Eventually, this is how everyone will work with video. These are just the first baby steps in a field that has enormous room for expansion. But they’re impressive, nevertheless.