How they made that odd-looking robot move in Interstellar 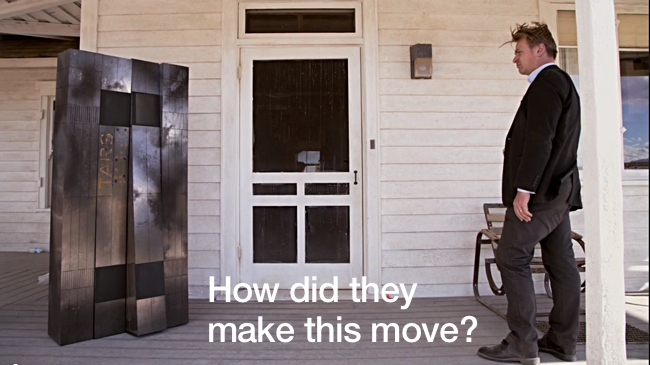 How did they make that - thing - move?

Interstellar is notable for many things. There's no doubt it's a fantastic film, nor that much of the dialogue is inaudible. And while it's a triumph for scientifically-informed computer generated imagery, it's also a landmark movie for taking new leaps in the art of manually animating articulated chunks of stainless steel and making them look like robots.

I must admit that I didn't instantly "get" the physicality of the TARS robot in Interstellar. It looked awkward and my initial reaction was: "why did they have to design a robot with all the physical grace of a vending machine".

But that was the point. Like some "game of life" self-evolving software, this awkward artifact found its own way to move, cope with challenging situations, and, eventually, become an integral part of life amongst the planets.

And I can't help feeling that this is in some ways analogous to the way we treat things we don't understand at first, here on planet Earth.

Here's a video that leaves no stone unturned in the quest to explain how they made those robots move in the film.