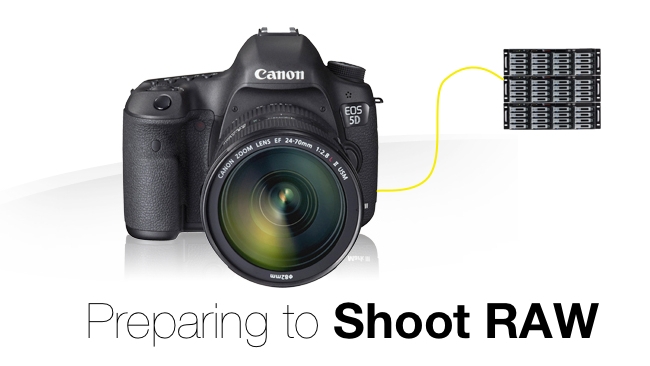 Peter J. Haas outlines how to go about planning a shoot that utilizes RAW image capture, including a file size comparison between DSLR formats and CinemaDNG , a discussion of shooting ratios and how this translates into storage requirements for a secure post-production environment

The early months of 2013 were filled with the announcement that the new future of cinema had arrived in the form of RAW cinema cameras. While shooting RAW isn’t exactly a new concept, the onslaught of new affordable RAW camera equipment is.

The major contenders in this field are the newly hacked Canon 5D, a line of cameras from Black Magic and Digital Bolex’s D16. All of these cameras have the ability to shoot RAW formats and cost under $5,000 USD. The field quickly expands to include RED and IKONOSKOP if you consider a jump to the sub $15,000 range, which you might if you are running a studio or production company as these costs are on par with the cost of the still loved and much missed Digi-Beta cameras.

The arrival of this technology is going to rapidly change the industry for both larger studios and smaller independent productions. All you have to do is watch a demo and see the amazing image quality of these cameras to understand why so many filmmakers are excited. Everything about the image is beautiful: the low-light performance, the dynamic range, the magical film-like texture and grain.

If the speed at which DSLRs were adopted as HD cameras taught us anything, it is that RAW camera technology will unquestionably be absorbed into the market and very quickly because it fits the two most important criteria: they’re cheap, and they produce amazing images.

While everyone is basking in the brilliance of the image quality, the lesser-had discussion revolves around the immense storage requirements for these RAW formats and how exactly these files are going to be handled both on set and in post production.

In this article we’re going to outline how to go about planning a shoot that utilizes RAW cinema; beginning with a file size comparison between two popular DSLR formats and CinemaDNG (the most popular RAW format). With this information we’ll discuss shooting ratios and how this translates into storage requirements for a secure post-production environment.

Before we begin, a note to the highly detailed technology brethren amongst us, I want to say this: I’m not a math-whiz, and a majority of these numbers are rounded for the sake of simplicity and clarity, but they do realistically represent the data we are dealing with and have served me well in the past.

Anticipation is heavy that easily affordable RAW cameras are going to replace DSLRs for a number of shooters.  Let's compare the recording times of two popular DSLR cameras in use right now; the Canon 7D, which is H.264, and the Panasonic GH2 which records in AVCHD.  I’ve broken it down into three common recording sizes:

Now, let’s take those same cards and shoot with RAW and see how much footage they hold:

The numbers speak for themselves. Even if you are planning on staying in 1920x1080 HD there are some major differences in storage capacity.

To give you a better idea of how these numbers play out, let’s start planning for a hypothetical film project to be shot in 2K RAW.

Getting the Right Cards

The difference in numbers isn’t only on the storage end of the card. When shooting RAW, the transfer speed of the card you’re using becomes incredibly important. It’s commonly agreed that 1000x cards are base line for recording with these cameras.

64GB 1000x cards are currently running around $250 USD, and on set, you’ll need at least three of them to ensure you’re able to constantly be shooting. So let’s go ahead and pick of three 64GB cards.

First we have to work out what our shooting ratio is going to be. This is the number of filmed minutes you plan on recording for every one minute of final product.

In the days of film you had specific number of feet you were allotted per shoot/per scene. You had to compare this to the length of the material you were required to shoot with the amount of stock you had and this gave you the approximate number of takes you would be able to shoot. These conversations mostly all went awash when hour-long tapes (I’m looking at you DVCAM) became the new standard and has all but gone out the window with direct-to-card digital recording.

The exact ratio of each project varies. I have worked on feature-length projects that have shot as little as 14 hours and as much as 300+ hours. This all depends on the narrative format of your film and amount of preplanning you’re able to do before you head to the field. An average shooting ratio for a contemporary long-form documentary sits somewhere around 25 to 1, leaving you with around 3000 minutes (50 hours) for a 120 minute feature.

On most narrative and smaller short-form projects, and more controlled shooting environments your shooting ratios tends to be smaller. A fair estimate for a narrative feature falls around 15:1. This would give you 1800 minutes (30 hours) of picture.

Let’s run that math for an average narrative feature.

In this instance, shooting with a DSLR camera allows you to store all your camera masters on a single 1 TB drive, with additional space left over to keep your separately recorded audio. Right now you can pick up a reliable 1TB G-Tech or Lacie drive for around $200 (USD). In contrast to, say, an 8TB raid from OWC for around $600 for the RAW HD feature. You would need two of these 8TB raids for the 2K feature, that’s $1200, and FIVE for the 4K raw feature, meaning you would be spending around $3000.

Since we’re talking about a 2K feature in this case, we’re going to need just over 8 TB for our picture, and then some additional space for sound, any production stills etc. So let’s add two of the 8 TB raids to our budget:

Keep in mind that this constitutes only one copy of your media.

When working with digital formats, it’s working knowledge that the safest way to secure your materials in a production environment is to have three copies of your location camera masters. This ensures that that you always have one easily accessible replacement copy and one “end-of-the-world-emergency-copy” sitting on a shelf somewhere preferably other than your office.

That 2K project now consumes 25 TB or six of those Raid drives we were talking about (at least we didn’t shoot 4K, where we would be talking about 99 TB!).

Let’s add the additional two sets of Raid drives to our budget:

Now that we have safely stored your camera masters, it’s time to think about editing.

The first thing people have to understand about working with RAW files is that you cannot simply offload the files from a camera and start editing right away. It’s not just suggested that you transcode these files for editing, it’s required. Even Adobe has dropped their native support for RAW editing in Premiere, citing performance issues in handling the immense amount of data.

Upon first looking at your RAW files you might find that they are incredibly flat and unappealing. This is due to the nature of how RAW files store their image information. In order to “fix” their appearance and get them into edit-friendly format you will need to run them through software such as Resolve or Pomfort’s Clip House.

This process not only takes time, but will also produce a new set of media files. Some folks say we should treat processing RAW files like film and only “print” (read: transcode) the parts that we know we want. I wholeheartedly support this idea, but based on my experience it’s very rare to work with an editor, director, producer or client who doesn’t “want every frame” in front of them at all times.

Let’s assume we’re going to transcode our files into Apple ProRes 422 (HQ) to get a good set of media masters. At 2K we’re looking at 91GB/hour, so for 30 hours we’re looking at needing around another 3TB of storage. Let’s grab two 2TB drives so we can keep all our audio and have space for renders etc.:

Adding up the amount of storage between the camera masters and edit space we quickly reach 52 TB, which if you include the cost of the cards with the drives, we’re looking at around $4750 excluding any labor costs.

There a number of questions we still have not addressed: how will we be wrangling the data on set? Is there going to be a fleet of mobile drives running between set and a post facility, or will you have the large Raid drives on set with you? 8+ TB is a lot of information, what is your long-term archival plan? Can your current SAN handled the 8+ TB needed for each new production?

As you can see when shooting with RAW, even under the most controlled situations, the cost in both storage and price start adding up very quickly. If these numbers are making you a little scared to shoot RAW, don’t be. It’s a beautiful format, and you will be incredibly happy with the results. The cost of RAW is going to go down as storage media gets larger and cheaper.

For the immediate future RAW’s demanding file sizes is going to create more critical shooters and directors. To the joy of many editors, shooting ratios are going to decrease as productions take advantage of the format while attempting to keep costs down.

With the attention the new cameras are attracting, it is obvious that shooters and producers will be flocking to the RAW format. The interesting question that remains is after experimenting with RAW, how many productions will stick with this new form of digital cinema or determine that their future is still with compressed video formats.