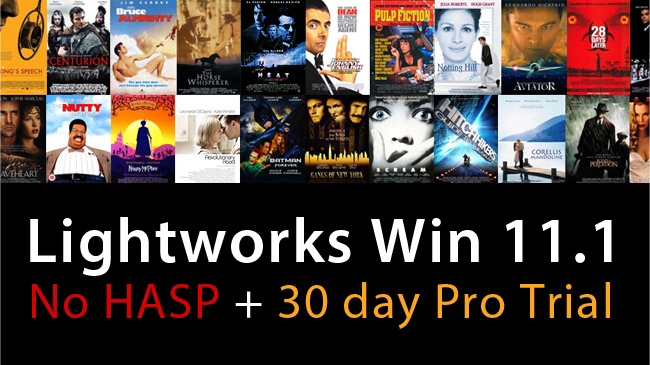 It's a year since Lightworks for Windows (version 11.00) was launched, Now, Version 11.1 is released, dropping HASP, and with a free 30 day Pro trial. If you found Lightworks hard to install or difficult to use with your media - now's the time to give it another try. Loads of other new features too

On May 28th this year, Lightworks 11.1 is launched. This has some major upgrades (detailed below) as well as easier installation and registration. Much to everyone's relief, it's dropped the HASP licensing scheme that was pretty unpopular with everyone, as it was snarky and very difficult to administer.

The Lightworks team says they hope that anyone who was discouraged by HASP issues will come back and try Lightworks without it. It is likely to be a much better experience!

Aside from the new features and functionality (detailed below), new users will be able to try the Pro version for a 30 day trial period. This will allow them to try Lightworks with their own camera material rather than having to transcode. At the end of the 30 day trial, they can either choose to stay with Pro or downgrade to the Free version.

To use the new licensing system, users sign into the application using their Lightworks Username and Password (an internet connection MUST be present on the system for this). Any existing licenses still to expire on the current release of lightworks will be honoured in the new ELS system. Users simply have to sign into the new version entering their Username and Password and their existing license(s) will appear in the list for them to activate (Pro and Avid DNxHD).

The new Windows release is another important milestone for Lightworks, and with a much better first-user experience, as well as a free 30 day Lightworks Pro trial, this is a good time to get familiar with this Hollywood-strength software.

Here are the new features in version 11.1 in full: