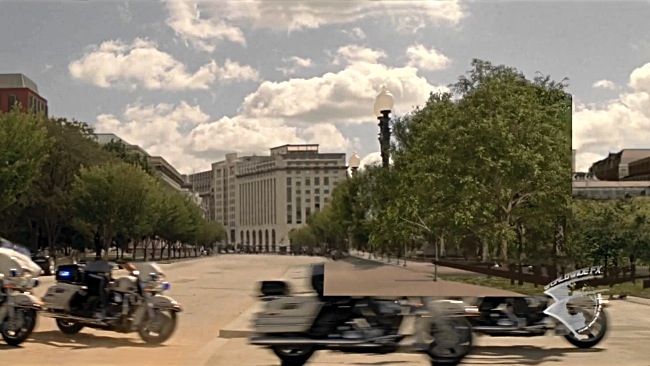 I don't know about you but I simply can't get enough VFX and Compositing breakdowns. The reason is that special effects are now so good that you don't always know they're there. It's pretty obvious with explosions, but what's definitely not so obvious is when a whole cityscape is fabricated

If you've never tried to produce a film, you might not have ever thought about how difficult it is to shoot in a big city. The reality is that you need permission, and then you need to be able to handle and pay for the logistics of clearing whole city blocks. But there's a deeper and truer level of reality than that, which is that more often than not, you can't do it at all. And that's especially true if what you're proposing to film is a fictional attack on the White House, for example. If you are, don't even bother picking up the phone: the answer will be "No".

You can do this almost anywhere

But, as we see in this compositing breakdown from WordWide FX showing their work on Olympus Has Fallen, what you can do is go somewhere (almost anywhere) else, build a mock frontage of the White House, fill the rest in with CGI, and sprinkle green screens wherever you need a camera angle to include something that isn't actually there.

If this was proposed as an experiment, you might concede that it would "sort of" work. In other words, you'd expect some rough edges.

But there aren't any. This type of production - which is becoming the default choice in many cases over and above "actual" location shooting - always amazes me.

Watch the video below and come back to see this, which is the most astonishing compositing breakdown we've ever seen.