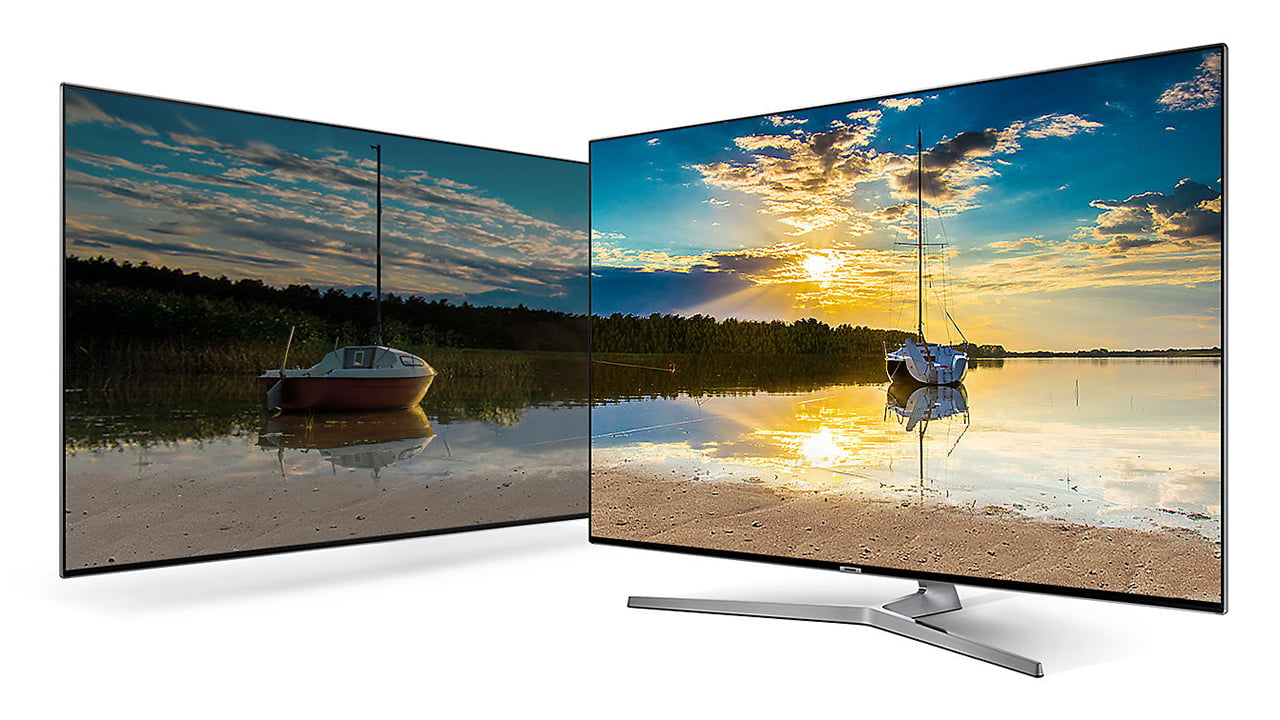 The difference between SDR and HDR can be stark

In this new series we demystify and simplify the main talking points of modern video. Colour space, HDR and RAW.

Two buzzwords have been the highlight of many tech shows within this past year - HDR and RAW. In this first part, I will attempt to clarify some of the concepts surrounding video signals, including High Dynamic Range (HDR). In part 2, I’ll cover more about camera raw recordings.

Four things define the modern video signal: colour space (aka colour gamut), white point, gamma curve, and dynamic range. The easiest way to explain colour space is with the standard triangular plot of the colour spectrum, known as a chromaticity diagram. This chart defines the maximum colours visible to most humans when visualised on an x,y grid. Within it are numerous ranges that define a less-than-full range of colours for various standards. These represent the technical colour spaces that cameras and display systems can achieve. On most charts, the most restrictive ranges are sRGB and Rec. 709. The former is what many computer displays have used until recently, while Rec. 709 is the colour space standard for high-definition TV. (These recommendations were developed by the International Telecommunications Union, so Rec. 709 is simply shorthand for ITU-R Recommendation BT.709.)

Next out is P3, a standard adopted for digital cinema projection and, more recently, new computer displays, like those on the Apple iMac Pro. While P3 doesn’t display substantially more colour than Rec. 709, colours at the extremes of the range do appear different. For example, the P3 colour space will render more vibrant reds with a more accurate hue than Rec. 709 or sRGB. With UHD/4K becoming mainstream, there’s also a push for “better pixels”, which has brought about the Rec. 2020 standard for 4K video. This standard covers about 75% of the visible spectrum, although it’s perfectly acceptable to deliver 4K content that was graded in a Rec. 709 colour space. That’s because most current displays that are Rec. 2020 compatible can’t actually display 100% of the colours defined in this standard yet.

The centre point of the chromaticity diagram is white. However, different systems consider a slightly different colour temperature to be white. Colour temperature is measured in Kelvin degrees. Displays are a direct illumination source and for those, 6500-degrees (more accurately 6504) is considered pure white. This is commonly referred to as D-65. Digital cinema, which is a projected image, uses 6300-degrees as its white point. Therefore, when delivering something intended for P3, it is important to specify whether that is P3 D-65 or P3 DCI (digital cinema). 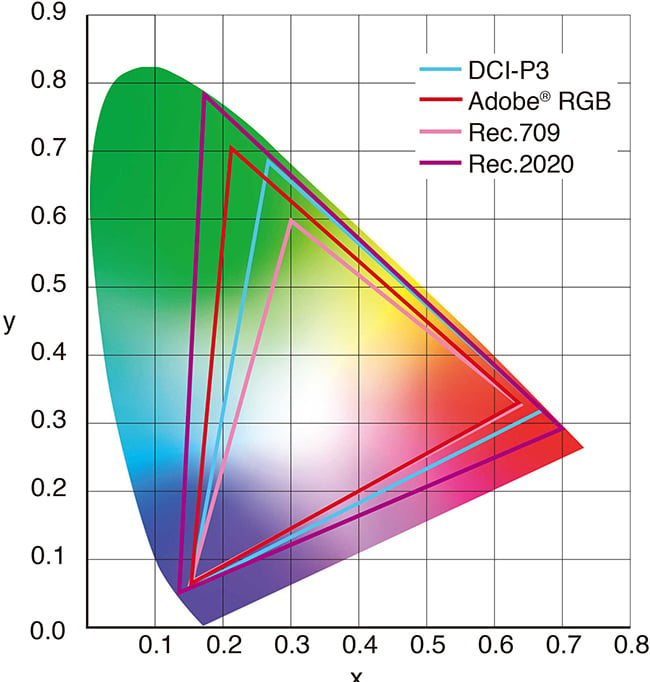 Colour space doesn’t live on its own, because the brightness of the image also defines what we see. Brightness (and contrast) are expressed as dynamic range. Up until the advent of UHD/4K we have been viewing displays in SDR (standard dynamic range). If you think of the chromaticity diagram as lying flat and dynamic range as a column that extends upward from the chart on the z-axis, you can quickly see that the concept can be thought of as a volumetric combination of colour space and dynamic range. With SDR, that “column” goes from 0 IRE up to 100 IRE (also expressed as 0-100 percent). With the advent of UHD/4K, users have also been introduced to HDR (high dynamic range), which allows us to display brighter images and recover the overshoot elements in a frame, like bright lights and reflections. It is important to understand that HDR video is not the same as HDR photography. HDR photos are created by capturing several bracketed exposures of the same image and then blending those into a composite – either in-camera or via software, like Photoshop or Lightroom. HDR photos often yield hyper-real results, such as when high-contrast sky and landscape elements are combined.

HDR video is quite different. HDR photography is designed to work with existing technology, whereas HDR video actually takes advantage of the extended brightness range made possible in new displays. It is also only visible with the newest breed of UHD/4K TV sets that are HDR-capable. Display illumination is measured in nits. One nit equals one candela per square meter – in other words, the light of a single candle spread over a square meter. SDR displays have been capable of up to 100 nits. Modern computer displays, monitors and consumer television sets can now display brightness in the range of 500 to 1,000 nits and even brighter. Anything over 1,000 nits is considered HDR. But that’s not the end of the story as there are currently four competing standards: Dolby Vision, HDR10, HDR10+, and HLG. I won’t get into the weeds about the specifics of each, but they all apply different peak brightness levels and methods. Their nit levels range from 1,000 up to Dolby Vision’s theoretical limit of 10,000 nits.

Just because you own a high-nits display doesn’t mean you are seeing HDR. It isn’t simply turning up the brightness “to 11”, but rather providing the headroom to extend the parts of the image that exceed the normal range. These peaks can now be displayed with detail, without compressing or clipping them, as we do now. When an HDR master is created, metadata is stored with the file that tells the display device that the signal is an HDR signal and that it must turn on the necessary circuitry. That metadata is carried over HDMI. Therefore, every device in the playback chain must be HDR-capable.

HDR also means more hardware to work with it accurately. Although you may have grading software that accommodates HDR – and you have a 500 nits display, like those in an iMac Pro – you can’t effectively see HDR in order to properly grade it. That still requires proper capture/playback hardware from Blackmagic Design or AJA, along with a studio-grade, external HDR monitor. 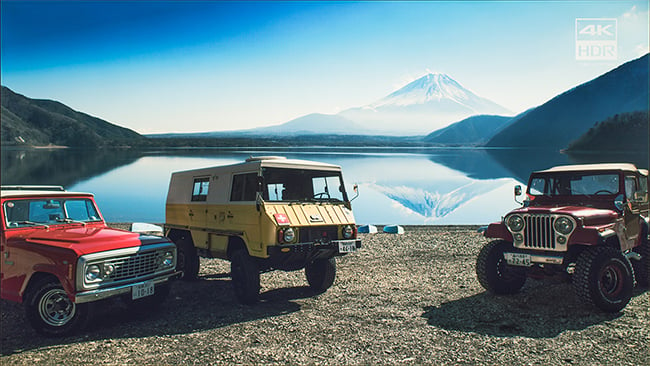 Unfortunately, there’s one dirty little secret with HDR. Monitors and TV sets cannot display a full-screen image at maximum brightness. You can’t display a totally white background at 1,000 nits on a 1,000 nits display. These displays employ gain circuitry to darken the image in those cases. The responsiveness of any given display model will vary widely depending on how much of the screen is at full brightness and for how long. No two models will be at exactly the same brightness for any given percentage at peak level.

Today HDR is still the “wild west” and standards will evolve as the market settles in on a preference. The good news is that cameras have been delivering content that is “HDR-ready” for several years. This brings us to camera raw, which will be covered in Part 2. Read part 2 here.