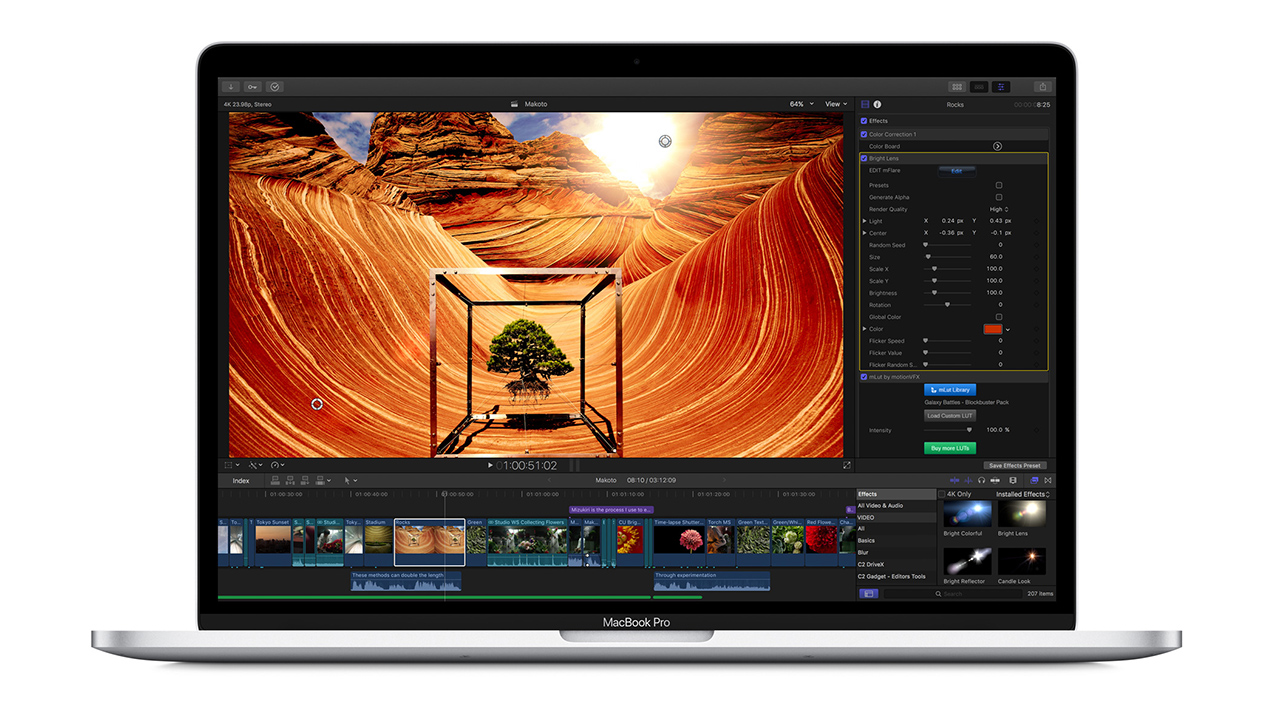 Rumours of the demise of FCP X have been greatly exagerrated (FCP X 10.3 shown)

Apple is clearly trying hard to prove to professionals that they haven't been forgotten. The latest version of FCP X is further proof that it is still an important market segment for it.

Okay, we grant you that the last update to FCP was back in May. However this latest announcment and demonstration shows that 10.4 is a major update rather than simply offering a few tweaks. And it looks like it will further correct some of the remaining gripes people had with the software, as well as adding in some major new capabilities.

First up is that the software now caters extensively for VR workflows, both in Motion and in FCP itself, and includes the capability to add in VR titles, transitions, and effects. In addition there is an auto horizon level correction tool for 360 video as well. VR edits can be output to a screen and to a VR headset simultaneously.

HEVC (H.265) encoding also figures prominantly, and dealt with in hardware for those with compatible Macs.

One of the most notable changes is a vastly improved colour correction tab, utlising much more traditional style hue controls in the form of colour wheels, and finally(!) a decent curves function. The latter is a function that users have cried out for ever since the first FCP X release, and until now have had to rely upon third parties to provide such controls. The new integration should mean that things run far more smoothly, and even include hue/sat curves alongside the usual gamma adjustments. Another addition is an auto white selector for correcting white balance much more easily.

Users will be able to load up custom LUTs, too, without the need for a third party plugin. Again this should make things much more efficient, and includes support for RED LUTs as well.

The 10.4 update also now fully supports HDR workflows. We do not yet know the full details of this support, so we will have to wait a bit longer to find out its extent and the options available. For those who upload a lot within the software, with any luck this will include sending the correct flags to streaming sites such as YouTube.

The iPad Pro as a useful editing device

There is one addition that is very curious indeed. And that is the ability to take edits made in iMovie on iOS devices and load the projects up within FCP X. There are still a couple of workflow based technical hurdles, such as how the footage is stored and referenced, but this could mean that devices such as the iPad Pro could finally become useful in the scheme of an editing workflow. Even if that is simply making an assemble edit while on the move or even on set, and then transferring it to the workstation later on. But the usefulness of this will depend on whether it can be made a useful proxy workflow, or whether Apple are literally just intending this as a way of finishing off your holiday videos better! It will be interesting to see how this pans out, or even whether Apple are hinting that an FCP mobile could be on the way at some point?

To summarise, this looks to be a very useful and notable update. The more standardised colour correction tools are bound to be welcomed with open arms by many users, while the new curves tool is a very late, but still essential addition. How such changes, including the LUT tool, will affect third party plugins remains to be seen. It may be that power users will still need additional plugins to get the effects they want. It will also be interesting to see how such changes stave off competition from the ever increasingly capable DaVinci Resolve. The NLE market on the Mac now has more choice than ever before, and fierce loyalties and/or disgruntlement can be difficult to quell. With any luck FCP X 10.4 will further demonstrate that Apple has no intention of abandoning their pro users. And with the iMac Pro, and forthcoming redesigned Mac Pro workstation on the near horizon, they will be keen to show that the best way to make use of them is with their own software.

There is no word yet on when the 10.4 update will be released. However it would seem that Apple is on the ball with this one. It was essential that FCP was updated to cater for some of the newer technology and methods. Luckily this time users haven't been left on the sidelines too long compared to rival software. We wait with interest to see how smoothly the workflow for VR video is implimented, since this could be a very big thing indeed in terms of making it a must use NLE, if done well.