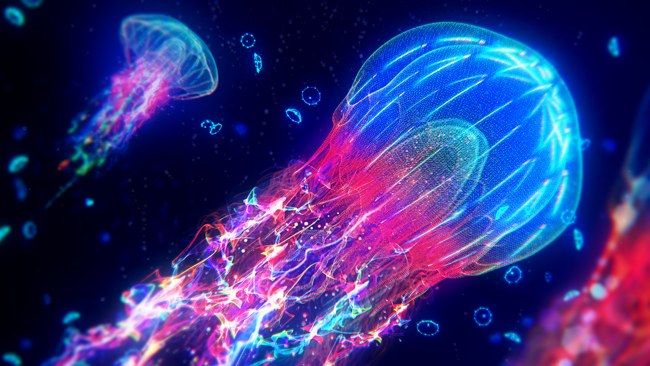 The power of particles. Red Giant's version 14 of Trapcode Suite

If you have anything to do with After Effects and animation, the chances are that you own or have used at least one part of the powerhouse Red Giant Trapcode suite. Version 14 gives even more reasons to do so

With over a decade of development, Trapcode is now a very mature piece of software, and now Red Giant has released a major update to it in the form of version 14. The entire suite, consisting of Particular, Form, Tao, Mir, Shine, Lux, 3D Stroke, Echospace, Starglow, Sound Keys, and Horizon, with Particular, Form, and Tao being the main focus of the new update.

Efforts have been made to make the interfaces more intuitive and easier to use. Particular has been given GPU acceleration, which Red Giant claims gives a four times increase in speed over previous versions, depending on your hardware. 3D objects and animated OBJ files can now be used as emitters, as well as being able to assign any image composition to a sprite or polygon. Further complexity to animations can be created with the ability to combine multiple particle systems within the same space. To top it all off, Particular now comes with an additional 210 new presets, which take advantage of the new features.

Trapcode Form now shares the same interface as Particular, which should help with consistency. A new designer features, as well as the ability to use 3D models and OBJ files as particle grids. Tao also now includes depth of field effects.

The full Trapcode 14 suite retails at $999, while to upgrade from a previous version costs $199. Alternatively, if you do not have a need for all the effects, each of the component parts of the suite can be purchased separately.

Red Giant’s full press release follows on the next page.

Portland, OR – August 1, 2017 – Red Giant today released Trapcode Suite 14, a major update to the industry’s most essential tools for creating 3D motion graphics and visual effects in Adobe® After Effects®. With a total of 11 powerful tools for 3D motion graphics and visual effects, release highlights include Trapcode Particular 3.0 and Trapcode Form 3.0, which have both been completely overhauled to offer faster rendering speeds and an incredibly intuitive user experience when building particle effects. Also included is a free update for Trapcode Tao, giving users depth of field effects for more realism.

"Trapcode has been a mainstay for the motion graphics and VFX industry for over a decade," said Chad Bechert, Red Giant CEO. “We wanted this update to live up to the high expectations of our community of users, and to help propel them into their next level of creativity. We're proud of what's in this release and incredibly excited to see what our customers do with these upgraded tools."

“There is so much good stuff in this release, it's hard to know what to talk about. Particular is now GPU-accelerated, making it much faster than ever before. And with the addition of 3D model-based emitters and multiple particle systems in the same 3D space, so much more is possible from the creative side,” comments Aharon Rabinowitz, Red Giant’s head of marketing. “In this release, we've also brought Trapcode Particular's popular Designer to Form, which makes building particle effects and working with presets more visual and far more intuitive. As someone who has used Trapcode plug-ins for years, I can say this is easily the best Trapcode update yet.”

"I cannot imagine my work without Red Giant tools. Sparks, smoke, and magic are basically my livelihood - and the astonishing Trapcode Suite contains some of my most essential tools when working on live action or animated films and television.” - Daniel Hashimoto, Action Movie Kid

Organic 3D particle effects, complex motion graphics elements and more. Trapcode Particular 3.0 features GPU acceleration for massive speed boosts, multiple particle systems in the same 3D space, the ability to use 3D models as particle emitters, and a new overhauled Designer that makes the building and previewing of effects an intuitive and creative experience, amongst other new features in high-demand. Experience the new Trapcode Particular 3.0.

With a library of over 60 3D objects/models, an expanded library of more than 270 sprites, and 210 new presets (over 300 in total), Trapcode Particular continues to offer motion graphics artists the most robust set of options for particle effects.

Immortal Particle Grids and 3D Objects. Trapcode Form 3 now features the same Designer found in Particular, which gives instant visual feedback and makes the process of building and previewing effects both intuitive and creative. Form offers users an expansive set of tools to work with, including over 60 3D Objects/Models, 270 New Sprites and Polygons, and over 70 Presets for fast motion graphics creation. Experience the new Trapcode Form 3.0.

Create 3D geometries animated along a path. A new depth-of-field effect makes it easy to create camera-realistic blurs for your Tao objects, based on their distance from the After Effects 3D camera. This is a free update for Trapcode Tao users.

Trapcode Suite 14 is available today and can be purchased for $999 ($199 upgrade) through the Red Giant online store. Customers can purchase individual products or the entire Trapcode Suite 14. Complete pricing info available at http://www.redgiant.com/products/trapcode-suite/.