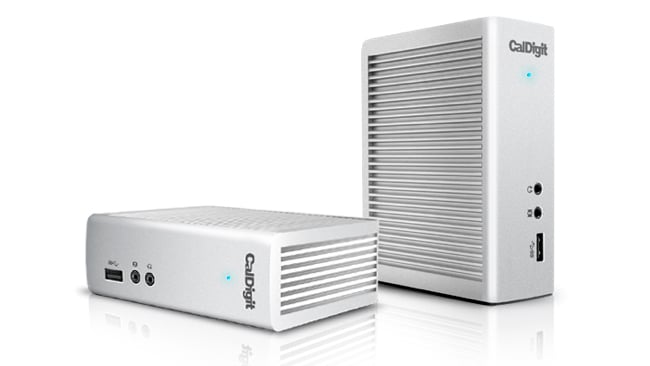 RedShark Review: The CalDigit TS3 Thunderbolt Station has an edge. Not only does it provide 85W charging power on one of its ports to Apple's Thunderbolt 3 MacBook, but it's also tiny compared to others. And it can be positioned upright on its edge, saving space on your desk.

The CalDigit TS3 Thunderbolt Station has two 40Gb/sec Thunderbolt 3 ports, three USB 3.1 Gen.1 ports of which one is high-powered, an Ethernet interface, one DisplayPort, separate headphones and mic ports and two eSATA ports. Especially these make a lot of sense if you want to hook up legacy devices to one of the newest Macs.

As I have a nice collection of bare drives and the CRU/Wiebetech Ultradocks to connect them, I started with the eSATA ports. And yes, you can have a drive run at its fastest speed through eSATA on the CalDigit TS3, which makes it simple to deduce that you probably can also run an eSATA connected RAID at its highest possible speed. It may not cover 4K video workflows, though.

Just as with the TS3 Lite, the TS3 Thunderbolt Station has an aluminium housing. The TS3 Lite has a full sheet of aluminium wrapped around it, but the TS3 has a ribbed surface, which allows for better heat dissipation — very noticeable when you touch its surface.

The box contains silicon rubber feet that cleverly fit on the outer ribs to put it on its side, but I personally favour the unit standing up. It takes less place that way, it has a solid silicon rubber base that firmly holds it in place and you can position it any way you like.

Of course, the TS3 has dual Thunderbolt 3 ports that allow you to daisy-chain devices — up to six of them per computer port. And if you need to hook up two 4K monitors simultaneously, you can connect the first to the DisplayPort and the second one via a USB-C to HDMI video cable to the second Thunderbolt 3 port. In that case, you lose out on the ability to hook up other Thunderbolt 3 devices, like hard disks or RAID configurations. The Thunderbolt 3 port supports a 4K@60Hz as well as a 5K@60Hz monitor, but if you connect a 5K display, you can’t hook up a second 4K monitor anymore — as with any currently available Thunderbolt / USB-C dock.

When you buy the TS3 — or TS Lite, for that matter — there’s an extra you can download from the CalDigit site. Except for the Battery Charging v.1.2 and SuperDrive supporting system extension, you can download a nifty menu applet that allows you to quickly unmount a device connected to one of the dock’s ports. Very useful, as it is much quicker than disconnecting from the Finder.

The TS3 Thunderbolt Station is well built, with an eye for the needs of the professionals who are going to use the equipment, and is available from CalDigit’s online store for €299.