Blackmagic Fusion 9 is here - with some big changes 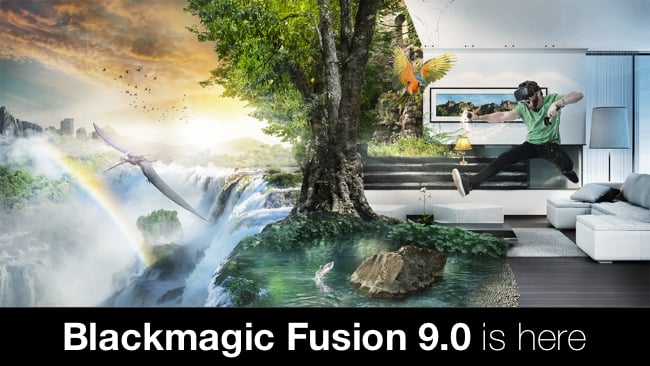 Blackmagic is one of the few companies to see the light and to sever its ties to the trade show calendar. This makes a huge amount amount sense because engineering cycles for new product development never pay any heed to fixed dates in the dairy. You can understand why: when you’re building a product, there are always issues to be solved. If you knew exactly when they’d be fixed, then they couldn’t have been real problems in the first place.

This announcement does co-incide with Siggraph, but essemtially it’s being made because the 3D compositing package is ready to ship. Nothing more, nothing less.

Just a quick recap. Blackmagic Design bought Eyeon - the makers of Fusion - in September 2014. One of the very first things Blackmagic did was to modify the software so that it would run on Mac OS, Linux and Windows.

Since then, there’s been a massive amount of work behind the scenes: much of it not visible on the surface.

There’s a lot to take in here. Anyone tempted to think that a product that is able to be given away for nothing can’t possibly keep up with expensive paid for packages is about to be comprehensively proven wrong by the following details, which we list in no particular order of importance (and please note that some of these new features are only available in the full version. There’s news about that as well - see below).

As you can see from the slightly whimsical headline picture at the top of the article, Fusion 9 comes with a completely new VR toolset that allows full-experience VR in real time. You’ll be able to drive high end Head Mounted Displays (HMDs) like Oculus Rift and HTC Vivet directly to preview and review your work from within Fusion 9. there’s a new 360 degree spherical camera that renders out complete VR scenes.

You may wonder why there’s such a push for quality VR tools. The reason is that VR technology is being driven by industries that have problems that VR can solve. That’s medicine - surgery particularly, architecture, and sectors like automotive design, where it will be possible to walk around future designs without having to create physical models. Of course Fusion is not an out-and-out 4D modelling tool, but its ability to place 3D models into context

Planar trackers make the task of fitting still or moving images onto objects in a 3D space much easier and robust. If you want to place a poster or a TV set on the wall, this is the tool you need.

There’s a completely new camera tracker that analyses the motion of a live action camera and creates a perfectly-fitting motion path in 3D space that can then be followed by cameras created inside Fusion. This will help with the increasingly important job of compositing elements within a scene while matching the original (real) cameras movements.

This new keyer comes with completely new image science to the application. It will make it easier to create clean, complex keys while preserving as much fine detail as possible.

This is essentially a means to show your Fusion material to clients and production colleagues. High quality output is possible through Blackmagic DeckLink and UltraStudio devices. There’s even remote synchronisation so that viewers around the world can see the same thing at the same time.

There’s no longer any need to pay a separate fee for render nodes.

Users in large and small facilities can install as many render notes as they need. The only payment needed is for Fusion 9 Studio on all of the artist workstations.

Fusion 9 has extra GPU and OpenCL acceleration making it faster than previous versions.

The price for the paid version, Fusion Studio, has been reduced from $995 to $299. This makes the full version of Fusion cheaper than some plug-ins. It might be that there will be in future more significant differences between the free and paid-for versions. But at this price, that makes complete sense.

What this all means

Behind the scenes, there’s been a huge amount of work on Fusion. It’s being brought closer and closer into the Blackmagic software family. Which means, in some respects, it’s closer to Resolve. We’re guessing here, but we can imagine that some layers in the two applications are merging. Things like collaboration and perhaps rendering.

Will it ever make sense for these two packages to merge? Not obviously so. But there’s no doubt that the two will share a common platform to a large extent. And this can only be good for users.