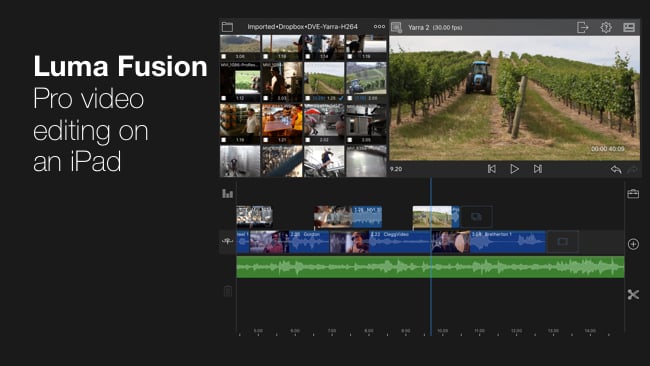 RedShark Review: As Apple's iOS platform becomes more powerful, applications for it begin to rival the power and complexity of desktop software. LumaFusion is a recently introduced nonlinear video editing product from Luma Touch and it's rapidly on the way to becoming a viable alternative.

Its founders created the Avid/Pinnacle/Corel iOS NLE, but LumaFusion takes a fresh approach. Luma Touch currently offers three iOS products: LumaClip (a single-clip editor), LumaFX (video effects for clips), and LumaFusion (a full-fledged NLE that integrates the features of the other two products). All three apps run under what Luma Touch dubs their Spry Engine, a framework for iOS video applications.

LumaFusion works on both the iPhone and iPad; however, the iPad version comes closest to a professional desktop experience. Ideally, you’ll want one of the iPad Pros, but it runs perfectly fine on an iPad Air 2 with the A8X chip, which is what I used. I’ve tried other iOS NLEs, including Adobe Clip, iMovie, and TouchEdit, which have their pros and cons. For instance, iMovie doesn’t deal with fractional video frame rates and TouchEdit tries to mimic a flatbed film editor. This brings me to LumaFusion, which has been designed as a modern, professional-grade NLE for the iOS platform.

Like other iOS apps, that tie into the ecosystem, media can be imported from iTunes, Photos, and other third-party applications, like FiLMiC Pro. As a "pro" app, it understands various whole and fractional frame rates and sizes up to 3840 x 2160 (UHD 4K), depending on your device. However, for me, the interest is not in cutting things that I’ve shot with my iPad, but rather fitting it into an offline/online editing workflow. This means import and export are critical.

If you own an iPad Pro, then you can get an SD card reader as an accessory. With the card reader, only native DSLR movie clips will be imported into the Photos app, but not other file formats. Typically, you are going to transfer media using cloud syncing tools, like Dropbox, Box, OneDrive, etc. LumaFusion also includes a number of royalty-free music cuts, which can be accessed through its integrated media browser.

To use it as a rough-cut tool, simply create H.264 proxies on your desktop system and sync those to the iPad using Dropbox (or another cloud service). I created a test project of about 60 clips (720p, 6Mbps, 29.97fps) that only consumed 116MB of storage space. Therefore, even a free 2GB Dropbox account would be fine. Within LumaFusion, import the files from Dropbox and start editing.

LumaTouch will soon start beta testing LumaConnect – a macOS companion application designed to facilitate offline/online editing roundtrips. It will feature automatic iOS proxy creation and the ability to relink high-res media – as well as any iOS-captured content - back on your desktop computer. LumaConnect will also allow the rendering of projects as Apple ProRes files. 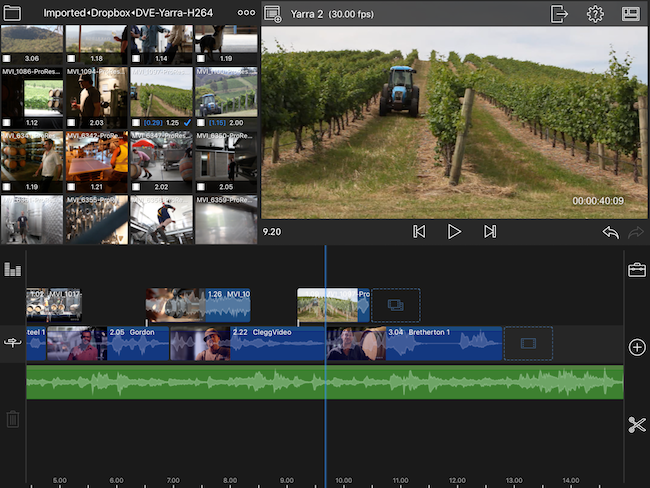 Overall, the interface design and editing model more closely approximates Apple Final Cut Pro X than any other NLE. The app’s design is built around a media pool with various editing projects (sequences). This is a similar approach to FCPX 10.0, which had separate Events (bins) and Projects (sequences), but no combined Libraries. It’s almost like FCPX “Lite” for iOS.

There are three main windows: media browser, timeline, and a single, combo viewer. It uses fly-out panels for tools and mode changes to access clip editing and effects modules. These modules are, in fact, LumaClip and LumaFX integrated into LumaFusion. The timeline is “magnetic”, much like FCPX. Clip construction on the timeline also follows the layout of primary and connected clips, rather than discrete target tracks. A total of three integrated audio/video clips can be stacked vertically, along with another three audio-only clips, for a total of six audio “tracks”. Audio can be adjusted through a fly-out track mixer. LumaFusion includes four clip editing tools: speed and reverse, frame fit, color effects, and audio editing. In addition, there’s a multi-layered title tool, along with a number of customizable title templates to choose from. Clip-based volume and video effect adjustments can be keyframed.

Effects are pretty sophisticated and would often be GPU-accelerated on a desktop system. These include color correction, blurs, transforms, transitions, and more. You can stack a number of these onto a single clip without any impact on playback. The effects priority can be rearranged and the interface also provides an indication of how many resources you are tying up on the iPad. 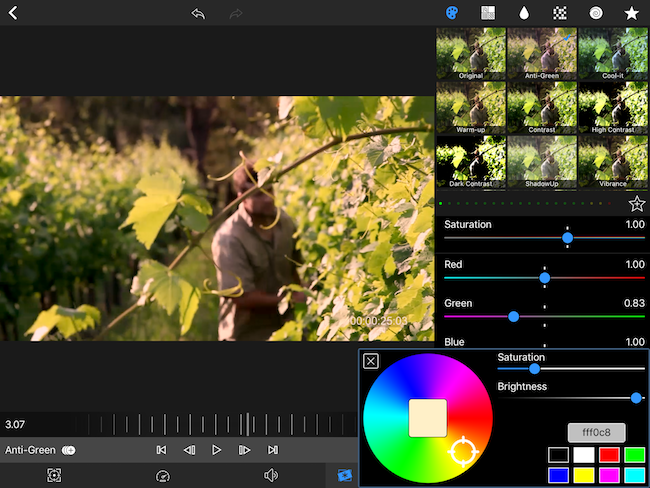 Serious video editing on an iPad isn’t for everyone, but the more I worked with it, the more I enjoyed the experience. If you have an iPad-compatible keyboard, it follows some generic commands, including JKL playback and I and O for mark-in and mark-out. There are also a few FCPX keystrokes, like W for insert/overwrite (depending on which edit mode is selected). Unfortunately, J (reverse playback) only works in the clip viewer, but not in the timeline. I’d love to see a more extensive keyboard command set. Naturally, being an iOS app, everything can be accessed via touch, which is best (though not essential) if you have the Apple Pencil for the iPad Pro.

There are a few standard editing functions that I missed. For example, there’s no “rolling-edit” trim function. If you want to move a cut point - equally trimming the left and right sides - you have to do it in the overwrite edit mode and trim the incoming or outgoing side of one of the clips. But, if you trim it back, a gap is left. J-cuts and L-cuts require that you detach the audio from the clip, as there is no way to expand an a/v clip in the timeline.

It is definitely possible to finish and export a polished piece from LumaFusion. You can also export an audio-only mix. This enables you to embellish your audio track outside of LumaFusion and then re-import and marry it to the picture for the final version. Because you can layer vertical tracks, cutting a two-camera interview piece on your iPad is pretty easy. Rough-cutting a first pass or pulling edited selects on an iPad becomes completely viable with LumaFusion.

Once you’ve edited your piece, it’s easy to share (export) your final sequence as a single audio/video file, audio-only file, project (currently only compatible with LumaFusion), or trimmed media. Be aware that there’s a disconnect between the frame rate terminology for settings versus exports. For example, with project settings, you can pick 24 or 30, which are actually 23.98 or 29.97; however, on export, you must pick between 24 and 23.98 or 30 and 29.97. Nevertheless, exports up to UHD frame sizes are fine, including downscaled sizes, if needed. So, you can import and cut in UHD and export a 1080 file. A flattened H.264 movie file of your sequence - wrapped in either an .mp4 or QuickTime .mov container - may be exported at up to 50Mbps (1080p) or 100Mbps (UHD).

If your intention is to use LumaFusion for “offline” editing, then, for now, your only option is to embed “burn-in” timecode into the media that you send to the iPad. Then manually write down edit points based on the visible timecode at the cuts. The upcoming LumaConnect macOS application will make it possible to send projects to both Final Cut Pro X and Premiere Pro via XML. According to Luma Touch, they will also be adding XML export from LumaFusion as an in-app purchase, most likely before the release of LumaConnect.

Using an iPad or iPad Pro as your only computer isn’t for everyone, but LumaFusion is definitely a tool that brings iOS editing closer to the desktop experience. To get you started, the company has posted over 30 short tutorials on their YouTube channel. Sure, there are compromises, but not as many as you might think for simple projects. Even if an iPad is only a supplemental tool, then like so many other iOS apps, LumaFusion is another way to add efficiency in the modern, mobile world.