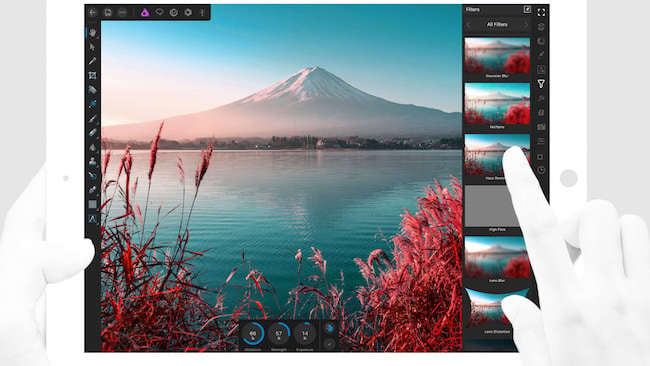 Affinity Photo drops its price to $19.99 for the iOS port

I tried Affinity Photo on my iPad Air 2 and I was very impressed with it, especially the speed with which everything works, including the effects you can see in real-time before you commit to them.

Watering down their Mac or PC offerings when they port them to mobile platforms is what many big software developers do. Serif, the company behind Affinity Photo on the Mac and now the iPad as well, hasn’t done that with Affinity Photo. Photo on the iPad is just as powerful and feature-complete as it is on the Mac.

The iPad version of Photo has an interface that closely resembles the one you’re used to on the Mac. That means a lot of screen real estate is taken up by menus, toolbars and the likes at launch time. Soon, however, I found that you can get rid of everything that gets in your way — effortlessly, even automatically.

Affinity Photo lets you access the levels of the toolbar by tap-holding a tool group and when you have what you need, the tool’s controls appear at the bottom of the screen. Round control discs with values displayed in the centre give you total control over everything that would be a slider on the Mac. Dragging with your finger or a stylus increases or decreases the values. I found the whole experience to be quite satisfactory, but a couple of icons could do with a bit of explaining.

The iPad version of Affinity Photo is not slimmed down in any way. It’s all there, from the development of RAW images to “inpainting”, brushes, effects, filters, colour management, masks, clipping masks, etc. — everything you have in the Mac version as well. The biggest difference is how you get to the images you want to edit. The Serif developers built their own image loading and management feature into the app. The result is that you can load images (including RAW) from cloud services, your Mac and the iPad’s camera and Photo app. You can also create a new empty canvas, panorama, stack, focus merge and HDR merge project.

In many ways, I found the iPad version of Affinity Photo to resemble that other iOS powerhouse: the painting app Procreate — except for the facts that Procreate is a pure painting app and doesn’t exist outside of the iOS world. Better yet, if you want to paint and don’t have Procreate, I’m sure Photo on its own will oblige.

As for the competition, I think no other currently available image editing app on the iOS platform has the same feature set and enables its users to switch between an iPad and a Mac to work on their files, without ever noticing differences in terms of functionality.

There’s just one thing on my wishing list: Photo supports the Apple Pencil, but no other Bluetooth stylus. While the Adonit Pixel I only recently reviewed works great, it doesn’t support the many implicit controls you have access to when using the Apple Pencil.