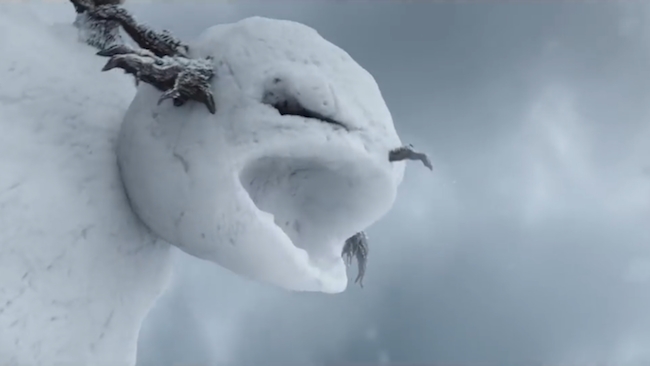 Game of Thrones with 4x4s: Grading and VFX proceeded almost seamlessly across a continent

How a workflow that used Baselight on opposite sides of Canada to work on the grading and VFX of the Nissan Rogue Return of the Snowmen commercial could point the way to the future.

The problems of having pictures presented to the audience as the director of photography intended is not a new one. It was probably somewhat easier to control when more or less the only stage at which things could be tweaked was in colour timing, a process more or less approximating Photoshop's colour balance adjustment. You could print to Vision Premiere print stock, if they'd pay for it, or you could use bleach bypass, if they'd let you. Much as with straightforward rec. 709 video, though, it was a process that could be controlled because the opportunities to tweak were limited, expensive, and routinely considered the preserve of experts. Conversely, modern approaches give us log images which are reliant on postproduction to look anything other than hopelessly wrong, and with an infinity of ways to make mistakes by pushing relatively low-cost buttons.

Any solution to this almost-total lack of standardisation needs to have both an on-set component and significant penetration into the post production world, so that monitoring looks right at each stage and the colourist has something to work from. Several bits of technology are relevant to this, not least ACES, though that's a standard not a device and at least some of this situation requires a box of electronics we can plug a monitor into and apply carefully-controlled changes to the image.

One of the most complete implementations of such a thing is the range of products offered by Filmlight in conjunction with its Baselight grading system. Baselight itself was one of the earliest systems to be implemented as a piece of software, moving away from the rather rigidly-implemented approach of custom electronics which had previously been the norm. The flexibility of that approach, plus a lot of capability in colour science and software engineering, has allowed the company to create more or less a complete system that's capable of solving quite a few of the problems of modern, particularly log-workflow productions.

A subset of the Baselight grading system, Editions, has for a while been available as a plugin for Nuke and Avid, with the ability to share Baselight Linked Grade (BLG) files between applications and facilities as easily as attaching them to an email. To an extent this is akin to sharing a project file from a nonlinear editor with someone else who's also got all the source footage. What's new is the compatibility of BLG files between plugins hosted by different applications, as well as the full Baselight grading system. This makes life a lot easier, particularly where there's a complex visual effects contribution which needs to be kept up to date. Filmlight's FLIP device and the Prelight production system support the same format, making it possible to keep everything consistent, given a sufficiently well-organised production.

Filmlight is enthusiastically promoting a few recent triumphs, particularly a Nissan commercial which involved VFX and grading on opposite sides of Canada, with grading at Alter Ego in Toronto and effects work at The Embassy in Vancouver. Ordinarily, there might be quite a bit of back-and-forth on grading as the visual effects work progresses, and intermediate viewing copies made during the process can end up looking inconsistent or incomplete. With the ability to swap BLG files around, these problems are a lot easier to manage.

If there's a problem with this it is that issue of a sufficient degree of organisation. Particularly, if someone high-ranking is wedded to the idea of using a particular system for a particular part of the process, it can be difficult to insist on a consistent approach from lens to screen. There are many potential solutions to the issue of consistent colour handling, from the perspectives of both technical accuracy and creative intent, and nothing can work without the willing participation of several of the traditionally separate departments of filmmaking. Perhaps a greater adoption of ACES can take some of the wrinkles out, but systems like Filmlight's, which can cover more or less the entire process, are a very encouraging model for what might one day be the norm.