Waking up the workflow [sponsored] 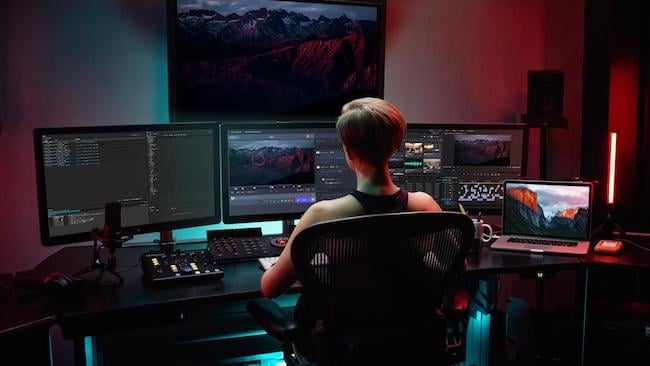 Workflows are right at the centre of modern digital production. No two workflows are the same, but the efficiency of this chain of tasks and actions can seriously affect the success of a production.

In short: with a good workflow, you can focus on creativity and work efficiently. And this is where Frame.io can help, in a profound way.

Filmmaking is an inherently collaborative medium. Even a one-man-band video producer has to communicate with the client or producer. Often there are dozens involved. Sometimes hundreds. Each has a stake in or a responsibility to the production. Even if you break down the process into small teams, people need to communicate within their team and with other teams.

A camera operator or cinematographer might want to talk to the colourist about his or her thinking in a certain shot. A director might want to point out important visual elements in a shot to an editor. A client in a commercial shoot might need to reject or accept takes. And Continuity might have spotted a motorbike in an Elizabethan drama.

Here is an email exchange that's probably pretty familiar to you.

Subject: Quick Edit
"It looks like there's a boom just barely in the shot in the second scene with Sarah. Could you remove that?"

Subject: Re: Quick Edit
"I'm having trouble finding it, could you tell me where it is?"

Subject: Re: Re: Quick Edit
"it's sort of on the left side of the frame near the tree"

Subject: Re: Re: Re: Quick Edit
"Sorry, I meant where in time. Could you tell me the minutes and seconds? Sarah is in a bunch of scenes..."

Subject: Re: Re: Re: Re Quick Edit
"I meant the second scene where Sarah is talking. It's at 9 minutes and 42 seconds."

The problem here is that phone conversations, texting and email are inherently divorced from the medium of video. They don’t allow you to make comments that refer to a particular timecode and show the image at that position, and they don’t let you reference a particular part of the frame.

Frame.io allows you to do all of these and the effect on a workflow is transformative.  Any authorised person can see the issue and begin work on it immediately, from any location. They can then send confirmation of their work back to the “approver” who can instantly see the result. Everyone sees not just “thumbnail” images but high quality moving images - and Frame.io automatically tracks different versions of each video so that everyone is on the same page.

But this is just part of what Frame.io can do for a workflow. Once you adopt Frame.io, you upload your material to Frame.io’s cloud (it has industrial-strength security), where the original material is kept safe and unchanged. Frame.io’s system makes high-quality proxy versions, transparently optimised for each type of viewing device: desktop monitors or smartphones, for example.

A strict system of permissions ensures that only authorised participants can see the video content. It’s easy to make groups or include individuals, and they get access according to their roles. Showing a video for comment to a selected person or group is as simple as sending an email, except that recipients will have an intuitive interface to assess and comment on the video in question.

Frame.io was designed by people who work with video. People who had problems they needed to solve. Every aspect of Frame.io is there because it eases a specific issue for video makers.

And Frame.io can turbocharge any workflow. It’s platform independent (for example it can work with Adobe, Avid, and FCP X).

Frame.io can help with creative workflows and technical ones. It provides a new medium for communication between professionals who’ve never had the right tools before. And it makes the best possible use of the cloud, without the confusion and without the risks.

Check out Frame.io for more information.