Resolve 14 is the software’s biggest upgrade ever 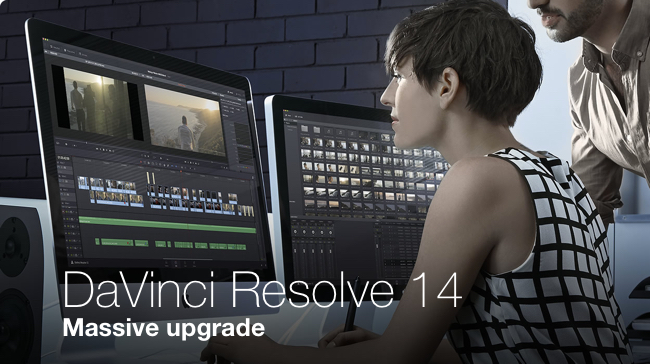 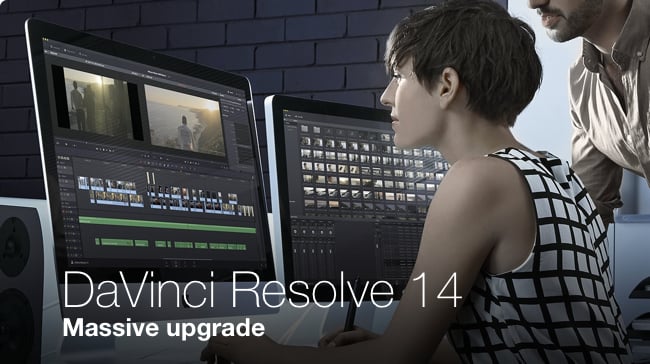 Resolve 14 raises the bar and lowers the price

Blackmagic claims that a complete back-end rewrite now means that the new Davinci Resolve 14 is up to 10 times faster than before. Not only that but, following the acquisition of Fairlight last year, it will also feature the full Fairlight audio engine.

Resolve is now up to ten times faster.

This was a huge surprise. DaVinci Resolve’s back end has been completely rewritten and the result is that the grading and editing application is now up to ten times faster. Let that sink in for a minute. Think about what you would spend on a computer that was only twice as fast as your current one! This is going to make a massive difference to every Resolve user.

It works both ways. It will make your computer seem faster, or, it will mean (within reason!) you will be able to use an older computer than before.

We’ll have to wait to see what this means in practice but I have seen a demonstration of Resolve 14 and it seemed very fast: everything seemed to happen without hesitation. (I didn’t see any complex node-based projects but it seems reasonable to assume that these will be proportionately faster too.)

If you’re wondering how BMD was able to increase the speed by such a huge amount, it really isn’t easy. It’s hard work to rewrite a massive application like this. But it’s worth it because the results can be staggeringly good. This must have been a huge job, but everyone’s going to benefit from this development.

(And if you’re wondering whatever happened to Resolve 13, it seems to have suffered the fate of many v13 software releases and been skipped due to the bad luck associated with the number. Besides, this is a big enough update to warrant a generational leap.)

It’s been only around six months since BMD announced that it had bought Fairlight: the seminal digital audio company. Fairlight has been through a number of owners over the decades but none of this dilutes the heritage of the company that is perhaps most famous for its Fairlight CMI sampler - the source of so many 1980s sounds and whose pen-operated green CRT screen showed up in dozens of contemporary music videos.

Fairlight didn’t stop there. It moved into digital audio post production. For a long time, Fairlight was a common sight in audio post houses. And it has never gone away. Its current generation tech is bang up to date and is unbelievably powerful; capable of more than 1000 tracks of audio in real-time. While the Australian audio company might not be as widely known as it used to be, it has remained at the cutting edge.

And now - quite incredibly in such a short time - the Fairlight Audio Engine is fully integrated into Resolve.

When I was shown this yesterday I was intrigued. I was told “there’s a new tab in Resolve”. And then I saw it. It said “Fairlight”. Clicking on the tab brought up a multi-track audio editor.

The specifications are impressive. Resolve becomes only the second NLE to be capable of sample-accurate editing. The audio editing and recording features are industrial strength. For example: A huge set of pro-audio tools for recording, editing, sweetening. Professional bussing, mixing and routeing. Multi-format mastering to spatial formats including 5.1, 7.1, and even (ready for 8K video) 22.2.

The Fairlight audio engine works with up to 192kHz audio with large bit-depths, and provides up to 1,000 tracks with EQ, dynamics processing and plug-ins on every track - in real time when used with the Fairlight Audio Accelerator (up to 60 tracks without).

Somewhat incredibly the Fairlight audio engine can record up to 96 channels while simultaneously playing back up to 150 audio channels - all while mixing in real time.

It goes without saying that this is a unique capability in an NLE.

There’s a multitrack audio timeline that is accurate down to sample level. There’s a flexible bus structure and the mix can deliver to multiple formats at the same time.

Each channel has real-time 6-band parametric EQ with expander/gate, compressor and limiter.

Effects include stretching or compressing audio without pitch shift. There’s full automation for every parameter.

The new recording tools are powerful: you can record anything from voice-overs to symphony orchestras while monitoring video and multiple channels of dialogue and SFX.

Out of the box, the Fairlight audio engine can process more than 60 tracks in real time. With the addition of the Fairlight Audio Accelerator card, 1000 zero latency tracks with real-time effects become possible.

Resolve 14 with Fairlight can also power each of the full-scale Fairlight mixing consoles, with full and accurate synchronisation between the video and the audio timelines.

There are over 20 new FX filters to remove dust and dead pixels and to warp images warp images. There’s a powerful new face enhancement tool that automatically recognises and tracks facial features to help with smoothing skin, adjusting skin tone, brighten eyes and even change lip colour - without having to manually select or rotoscope any part of the image.

Resolve 14 has new features to allow collaborative working between multiple users and between audio and video workstations. At some point in traditional workflows, it’s been necessary to export audio and then re-import it when it has been edited and processed. This stage is no longer possible because the audio and the video remain in the same project at all times.

And there's a price drop too

The price of DaVinci Resolve 14 Studio is $299; down from $995. Blackmagic pointedly says that this makes it cheaper than most “annual cloud-based subscription plans”.

But, somewhat incredibly, the speed increase and the Fairlight audio engine are available in the free version.

When we were shown this new version of Resolve, we were simply blown away. This changes so many things. The speed increase is transformational. If you have a rather slow computer you’ll now be able to run Resolve at a decent speed. If you have a fast workstation, it will go into orbit.

And all of this is available in the free version. Which is incredible.

Update - We omitted to say that this is a Public Beta version: don't use this for any projects that you can't afford to lose!