8K cameras and screens are here. It’s time to think about working with 8K [sponsored] 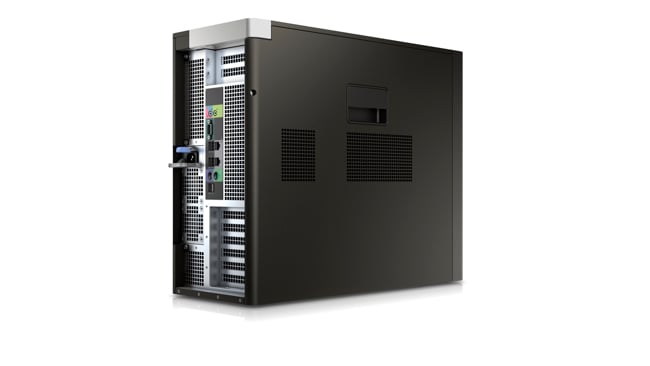 The AMD-powered Dell Precision T7910: the power you need to work in 8K

When 8K was first demonstrated, it was highly experimental, with specially built cameras and displays. These were prototypes and the aim simply to prove that it was technically possible to show that number of moving pixels - thirty two million of them - on a screen and to give a rough idea of what 8K video might look like. While early demonstrations of 8K were impressive for the detail, perceived dynamic range wasn’t particularly good and behind the scenes you couldn’t help but see all kinds of technological kluges, including a plethora of SDI cables and an inordinate number of odd, non-standard connections.

8K still isn’t exactly routine, but it is now highly visible on this side of the horizon, and the emergence of real, actual 8K cameras has driven up expectations that we will soon all need to be “fluent” in 8K.

It’s quite possible that we’re approaching the sensible limit of display resolution because to go beyond 8K, you’d need a display bigger than a wall in the average house: so that isn’t going to happen. But there are other reasons why 8K resolution and beyond is going to be needed in the very near future, and the demand is going to come from two completely opposite directions.

It does seem almost like science fiction that you can go to a shop and buy an 8K camera. But you can. The RED WEAPON Helium has been available for some time and with the world’s biggest trade show for broadcast and filmmaking technology, NAB, coming up in April, it’s likely that we’re going to see more examples of 8K capture technology. 4K was adopted at least four times faster than even the experts were predicting and while 8K isn’t likely to make quite such a splash, it will come, and we need to be prepared for it.

Don’t forget that even though there aren’t many 8K displays around at the moment, video is being captured in 8K now and will need post production, grading, transcoding, etc. Dell already sells an excellently featured 8K monitor.

The likelihood is that when 8K does become commonplace, it won’t be because of the demand for higher resolution so much as the fact that it will become the default resolution for cameras. This is exactly what’s happened with 4K and there’s little reason to think this won’t happen again with 8K

The real future of video is beyond a rectangular flat screen. Flat screens won’t go away - neither has radio - but they will be superseded by more immersive technology. This includes virtual reality but also a vast array of new display technology that is unbounded by traditional broadcast standards and limitations. Outdoor digital signage can demand even higher resolutions than 8K. Meanwhile, Virtual Reality and Augmented reality look best with extremely high resolutions.

Working with all those pixels

It’s no surprise that you need a powerful workstation to be able to work at a reasonable pace with thirty two megapixels per frame. Not all 8k workflows demand that you work with full resolution media; proxy workflows can be extremely effective, but at some point it will be necessary to render at full pixel count.

Some processes need a fast CPU. Many others call for a fast GPU (Graphics Card). By far the best option for professionals is to buy a combination of workstation and GPU that has been certified by both manufacturers. This matters for several reasons.

1) The GPU and Workstation manufacturers will have worked together to ensure that their components work properly together. They will have ironed out any conflicts and issues, and the combined system will work to its full potential.

2) The manufacturers will also certify selected software packages to work with the workstations and the GPUs. In a busy working environment like a post production or VFX facility, this avoids the awkward situation where the software suppliers blame the hardware, and the hardware suppliers blame the software. Freelancers, who may be tempted to buy cheaper equipment, also need to consider this approach. Lack of support is one of the biggest hazards when you’re working alone.

3) Professional equipment manufacturers guarantee that they will keep designs stable for longer. The more stable a platform, the more suppliers are able to support it, and the longer it will remain a viable, supportable system.

Software suppliers work closely with hardware manufacturers to optimise their products for specific hardware platforms. Software like the Foundry’s CARAVR and Autodesk’s MAYA and MAX all benefit from enhanced support when used with certified workstations.

AMD and Dell have teamed up to supply a range of high-octane workstations that are ideal for working with very high-resolution video. Optimally configured and supported out of the box, they’re amongst the most capable workstations you can buy anywhere.

If you’re looking at 4K and 8K workflows now and the future, remember to look at the overall cost of ownership - including support and maintenance. Working with 8K will take your computer to the edge of its performance. It’s essential to buy a system that is guaranteed to work under these conditions.

To find out more about the Dell Precision workstations with AMD FirePro™ Graphics click here.