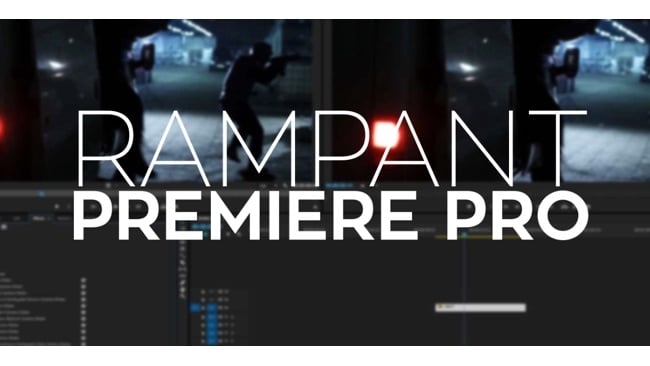 Rampant Design has unveiled a new series of tools, including presets and templates, aimed squarely at Premiere Pro users looking for a little bit off the shelf.

Historically, templates for Premiere Pro or After Effects were often considered to be a cheap and cheesy solution to video’s low-budget client problem. Template sites offer thousands of easy to customise options for video makers, full of shattering logos, lens flares and radial gradient backgrounds. Some are nice, some are crummy, most look like a mashup of Andrew Kramer tutorials put together without Kramer’s finesse and accuracy.

From our testing, the Rampant Design products look to be nicely put together, with contemporary effects that will be useful in real video projects.

Rampant Design is helmed by three-time Emmy Award-winning visual effect artist, Sean Mullen, and has spent a decade or so creating high-quality visual effects or “style effects”, designed to be as close to drag-and-drop as possible. It has a massive library of pre-baked visual effects, transitions, mattes and other tools for dressing up video as a result, which it is spinning out as a series of bite-sized tools giving editors exactly the effect they’re looking for. Firstly, there is the Zoom & Whip Transitions pack for Premiere Pro. As the name suggests, this set contains eight zoom and whip transitions, mimicking classic fast camera moves, perfectly created to transition two pieces of footage. Tough to go wrong for 20 bucks.

Next up is Realcam PR, a set of 13 real camera shakes. These are organically created camera shake presets to add realism to footage that needs to look shot with camera movement. All of the shakes were created using a RED EPIC camera and include everything from subtle shakes to full blown action scene shakes. Realcam PR sells for $29, saving us a bundle over buying our own EPICs.

OK, so considering the third preset; maybe they’re not all “bite-sized”. Premiere Essentials V1 gives editors a little bit of everything Rampant Design is known for rolled into one preset pack. This set contains 120 drag-and-drop presets, including transitions, visual effects, letterboxes, frame effects, and bump and shake effects. Premiere Essentials V1 will run you 30 bucks.

If the presets are the power tools editors use to manipulate Premiere projects on to greatness, the Rampant Premiere Pro templates are the spectacle screwdrivers of the toolset, addressing very specific needs. The current (and ever-growing) lineup includes everything from movie trailer templates to VHS and vintage film effects, to customisable titles and lower thirds, to slideshows and more.

It’ll be interesting to see how the library of Premiere Pro tools grows over the coming months but if this is the starting crop, things are looking good.