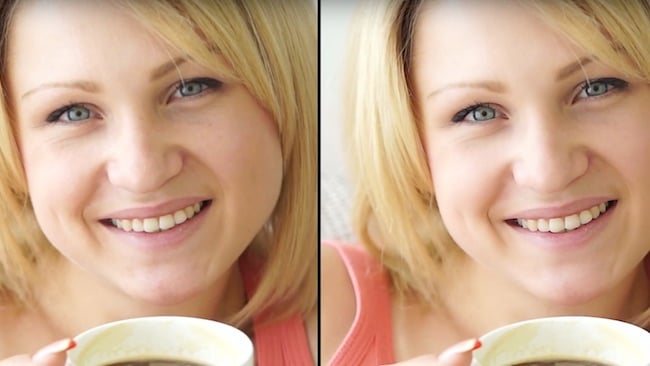 Before (left) and after (right) sharpening

How many times have you captured that perfect Kodak moment, with the exception of the image slightly being out of focus? I'm not talking about so fuzzy you think there's a person in a shot, only that the image is a bit soft. Turns out there's a solution....

It happens to me often that I'm just a bit short when I’ve forgotten my glasses and think I have my camera in focus. So rather than have to re-shoot the footage or curse the stars that you missed that magical moment because of bad focus, how about using a third-party plugin by Digital Anarchy called Samurai Sharpen to bring them into sharper relief? Could a digital katana be the answer to your focus problems?

The realm of digital sharpening is fraught with danger. Often the tool you are using gets overly aggressive, making the digital image noisy with artefacts and aliasing, which can definitely be a problem if you have a complicated background. Or it ends up being too little too late, making the image muddier or unnoticeable.

In contrast, Samurai Sharpen seems to find that happy middle of the road by giving the user minute fine grain control with areas of the image itself, rather than a blanket slider that will adjust the entire thing. So if all you need to do is sharpen the face or the eyes to save the image, Samurai can do that.

The plug-in uses an algorithm that analyses the image's edges and areas of transition. In areas that don’t need sharpening, like when skin tones are involved, Samurai will leave those alone. In areas that do, such as the eyes, nose and mouth, the user can fine-tune the results to get the image they like.
The sharpening tool also stays in the mid-range of colour correction, so as to keep the image in tune with the area surrounding the subject or enhance shadows or brightness where details get lost. That is a smart move on Digital Anarchy's part.

You can also use Samurai anywhere in the post production workflow, even while the cameras are still rolling. So, if there's a performance that the director likes, but that wasn't properly focused, he can make a call to the post house to see if the scene can be saved after he fires the 2nd AD, which can mean no re-shoots.
Other specs include:

Available for Adobe After Effects/Premiere Pro, Final Cut Pro X, and with vid and OpenFX coming soon. It costs only $129. There's also a free trial.