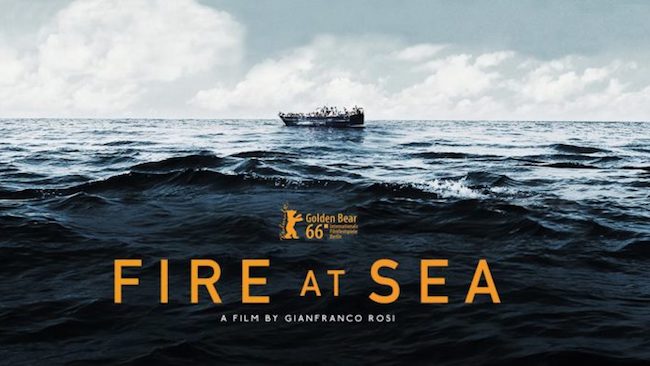 3 minute read
Fire at Sea: Hard-hitting and pushing the boundaries

Replay: Colourist Andrea Orsini reveals the ways in which DI can craft nonfiction through his work on Oscar-nominated Fire at Sea.

When we think of colour grading, a documentary may not be the obvious medium of choice to show off, especially not one like Fire at Sea - it’s hardly your typical BBC fare. Told from the perspective of several of the residents living on the Italian island of Lampedusa, it explores a community that has, in recent years, become the first port of call for hundreds of thousands of North African refugees who survive the dangerous journey into Europe.

It’s a political film that deals with a very delicate subject - and it actually depicts terrible scenes of real, violent death. That’s part of why we were so surprised to win the Golden Bear for Best Film at Berlinale with it, and to have been nominated for the Academy Award for Best Documentary Feature at this year’s Oscars since.

Grading without a script

I first got involved on the project for both technical and emotional reasons. I was introduced to the director, Gianfranco Rosi, by way of his very good friend, DoP Luca Bigazzi, who had already supervised the colour on many of Rosi’s past films. They’d worked together on his previous documentary, Sacro Gra, right up until the final 35mm reel deliverables, and ultimately, it became the first documentary to ever win the Golden Lion at the Venice Film Festival. I already knew that Fire at Sea would follow in Sacro Gra’s footsteps, continuing to push the boundaries of what a documentary could be.

People ask me how I delivered the grade to a film like this, what my objectives were. The answer is simple: the biggest secret to our workflow was actually not to treat Fire at Sea like a documentary at all. None of us ever considered it to be one as such, which is why it was so fitting when we won Best Film at Berlinale. We used pretty much every tool within the Studio version of DaVinci Resolve with their advanced panel, and the most important thing was to bring every detail to the big screen.

There were a few differences between a typical feature workflow and Fire at Sea however. Normally, we would begin by having a meeting with the director and DoP to discuss the script and how each scene would look, but with Fire at Sea there was no script to speak of.

The entire film was shot by Gianfranco himself. He spent a year on his own on Lampedusa with an ARRI Amira, shooting in ProRes 2K in a 1:85 widescreen format with no help whatsoever aside from a local who was showing him around. Nothing was written on paper or pre-planned. He did two trips on a navy ship that lasted almost a month each. He met the young boy, Samuel, early on on set and knew within five minutes he would be in the film as a character.

Subtlety was key here. Once Gianfranco had gone through the thousands of hours of rushes, he ended up dividing the film into three levels of narration - three stories that intermingled between themselves to form the bulk of the film. There was the immigration center, an empty space in the middle of the sparsely populated island where immigrants would be sorted before they moved onwards, the daily lives of Samuel and his friends and relations, and the view from a navy ship that, on a regular basis, pulled human beings from the sea. We planned the overall palette and aesthetic according to those three storylines.

We used Resolve’s tracker in combination with power windows to follow and highlight specific elements in the frame, like people’s faces, and did some denoise for sequences shot at night using the noise reduction tools.

One of the pivotal sequences, and one of my favourites to grade, involved the hatch of a flagship opening to let a helicopter exit to save people from drowning. It’s a really tense moment in the film - remember, these are real people - and was also shot at sunrise so there were some spectacular colours coming through. We took advantage of this in the grade, really pushing the colours and contrast to emphasize the drama of the moment.

No matter what the results of the Oscars are, my motto is to always go where the client takes you, and when it came to Fire at Sea, it was truly an amazing experience to go wherever Gianfranco lead. He has portrayed the migrant crisis up close and personal, in a way that’s never been seen before, and it’s important that more people watch and talk about it. In these turbulent political times, I hope other filmmakers start following in his footsteps.