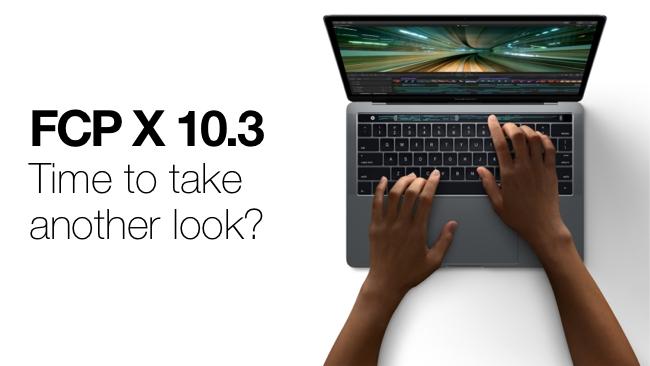 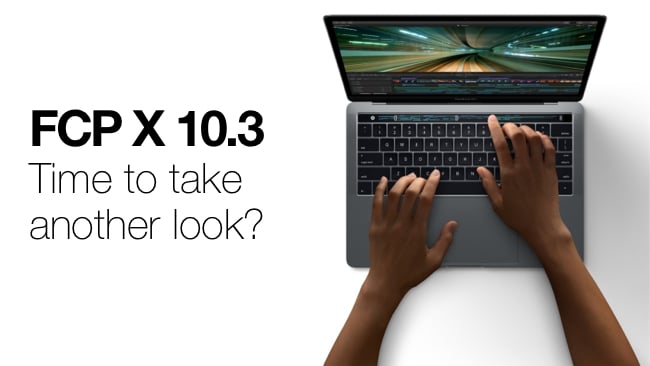 Opinion: Final Cut Pro X might have driven swarms of editors into the arms of Apple’s rivals, but with FCPX 10.3 Apple finally delivered on the promise of the software and, if you edit, you owe it to yourself to leave your preconceptions at the door and check it out. By Khaled Spiewak.

So once upon a time, FCPX was released and, like most of you, I hated it. Spat the dummy and thew all the toys out the pram. What was this? I thought. Why is my timeline constantly moving? What’s this Fischer Price effects on my side?! Away back to iMovie, with you! I’m a pro here.

It wasn't a happy time. My humble beginnings of video editing dated back to 2003 using Final Cut Express all the way through to the mighty FCP7. I spent thousands of man hours trying to master my craft with the tools presented. I made a commitment. These were my tools for story telling and for what? Apple dragged it’s heels like a crazed grinning Jack Torrance wielding an axe and destroyed all that was beautiful and took seven years of MY experience with them. I felt betrayed.

Like many others I jumped ship over to Premier Pro and haven’t look back since. That was until October 31st, 2016.

Apple then released FCPX v10.3 and it all started with this video. Suffice to say, it piqued my interest. Thanks to my one off payment of £199 (at the time) and Apple still honouring its commitment to keeping the upgrades free even after six years, I blew the dust off a lower powered (Iris Pro) MacBook 15” and gave FCPX one more shot.

My initial reaction was: “What is this magic?” Forgetting the fact that I’m ploughing through UHD footage on an ‘underpowered’ MacBook Pro but being able to quickly execute ideas in my head in a few clicks is liberating. Approaching the magnetic timeline with fresh eyes, it presented itself in a new light. I simply love how FCPX just gets out of my way and allows ideas to flow. The stress of knocking your entire sequence out of sync is gone. It’s just you and your end product.

I simply cannot stress how efficient my workflow is now. If a project is to take me seven days to edit on Premiere Pro or MC. I will have it completed within three days or less using FCPX. The money/time saved ratio in itself is a winner alone.

Apple’s vision and decision to redesign is becoming clearer. Despite losing a sizeable market share, it stuck to its guns in the belief that this is the future of editing and rightly so. To supplement my desire to now exclusively work on FCPX if the project allows it, I now choose to edit on my older MBP over my super changed custom PC in the office. Right now, I’m editing project with 4K XAVC footage on a MacBook Pro that doesn’t have ‘real’ dedicated graphics.

All of this wouldn’t be possible without FCPX’s simple proxy editing feature upon import. Everything is processed intelligently in realtime and relinks are done with a literal click of a button (without any hiccups that can occur).

There is a lot to be said about this NLE. I can go on about the revamping of roles and the addition of audio lanes. How thinking in libraries with events and how that is all presented in a seamless experience, or how Apple really hammered home powerful proxy features that makes your editing life a breeze - but all this is pretty much lost until you actually give this NLE another shot with an open mind.

It’s become clear that FCPX was for editors who didn’t have any perceived notions on how to piece together a project and ultimately, editors who have been in the game for a long time this was too much of a jump. Personally, I didn’t quite get FCPX at first, but you know what they say; people hate and resist change. So I caved, swallowed that massive pill, reconditioned my thinking and haven’t looked back since.

From my understanding, 10.3 required completely ripping out the engine of the application, retooling it, and putting it back in (which is why so many are noticing significantly improved performance). This is on top of completely overhauling the way the magnetic timeline works (particularly for audio), and completely overhauling the UI. Apple wouldn't have bothered with any of that if it wasn’t a viable business proposition or if they were giving up on the application. And from what I can see in 10.3, it seems to be laying the foundation for even further improvements.

Which brings me to this: Some of you will shout about how the industry is still dominated with Media Composer and Premiere Pro. And yes, at the high-end it is. But as great and influential as places like Hollywood are, that is a tiny, tiny fraction of the market. FCPX is increasingly becoming the indie’s choice of NLE, and Apple is rapidly building the foundations of tomorrow’s editors. I’m not one for placing bets, but I wouldn’t lay my money against FCPX just yet.