About that CGI Peter Cushing in Star Wars: Rogue One... 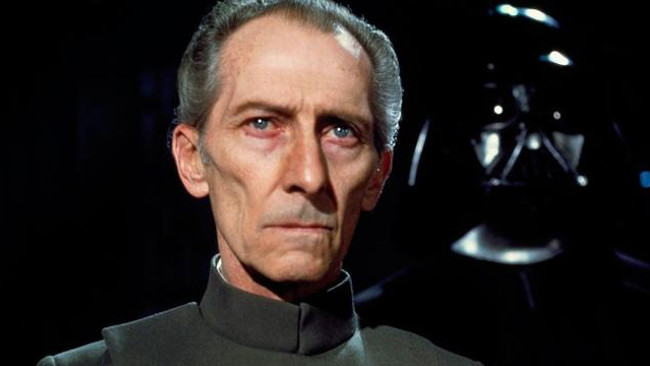 The most recent cinematic foray into the Star Wars universe resurrects Peter Cushing's Tarkin from the original films, but did the computer generated version of the beloved actor span the dreaded Uncanny Valley? By Joe Foster.

**WARNING: contains spoilers for Rogue One**

Hollywood is known for making iconic stars immortal long after they have passed, but sometimes filmmakers, editors and special effects gurus go one step further by fully recreating deceased actors for various shots or scenes. "I see dead people" is a phrase from the 1999 movie The Sixth Sense, although more and more cinema-goers have been making the same claim for a number of years now. Examples are surprisingly numerous, from Brandon Lee's digital and body double resurrection in The Crow, to Oliver Reed's final scenes in Gladiator and, fairly recently, Paul Walker, who was digitally recreated using a mixture of CGI and body doubles to finish Fast & Furious 7 after his tragic death in 2013.

We have another example to add to the growing list (although now, sadly, two examples with Carrie Fisher's recent passing) in the latest installment of the Star Wars franchise, Rogue One. Lucasfilm announced quite early on (around August 2015) that an old character from the very first movie, Grand Moff Wilhuf Tarkin, would be fully recreated using CGI. In the original movie, Tarkin was played by British actor Peter Cushing. Outside of numerous Hammer Horror films and playing the lead in movie versions of Doctor Who, the character of Grand Moff Tarkin in Star Wars is one of his most famous roles. Cushing died in 1994 at the age of 81.

When the news of a CGI Tarkin first came about, fans (including me) were a little skeptical. Forum posts expressed fear and doubt about how truly accurate a CGI recreation of a real human being could truly be. I was also one of those fans that thought that maybe Industrial Light & Magic was biting off more pixels than it could render and thought it best to simply recast Australian actor Wayne Pygram, who was subjected to heavy makeup to play a background Tarkin in 2005's Star Wars: Episode III - Revenge of the Sith. Sure it didn't look one hundred percent convincing close-up, but surely they could make improvements?

I needn't have worried. Having seen the film twice on some very large screens, I'm very impressed with the results. I know that this is probably quite a dull, uncontroversial opinion, but I'm simply being honest. My jaw dropped to the floor when the focus was pulled, Tarkin turned to face the audience and started to speak. Perhaps the main problem with the effect was that I struggled (at least on my first viewing anyway) to focus on the drama of the scene simply because I was too much in awe of who, or possibly what, was speaking in the soft, authoritative and slightly sinister imperial tone.

What struck me the most wasn't just the detail of the face or the subtleties of movement, it was the lighting. Usually when something is super-imposed into a scene, you can normally tell it's fake with inaccurate lighting. However, in the case of Tarkin in Rogue One, I would go so far as to say that the lighting was spot on. This must have been a monumental task, given that the original Star Wars movie, starring the real Peter Cushing, was lit differently. Details have surfaced regarding how the effect was painstakingly realised, using the British TV and movie actor Guy Henry as a stand in (movie fans will recognise him as Pius Thicknesse in Harry Potter and the Deathly Halows Part 2, and British viewers will recognise him from the TV drama Holby City). Henry was chosen for having a similar facial structure, build and voice to be the basis of the Peter Cushing resurrection. A CGI recreation of Cushing was then mapped over him.

Is digital Tarkin completely perfect? No, it's not. What lets it down is the mouth movements. Though the result is nowhere near as rubbery and puppet-like as Jeff Bridges' younger recreation in 2010's TRON Legacy (I was never fully comfortable with the results, no matter how impressive the face looked), it's not quite there, with very occasional dips into puppet/muppet territory. The good news though is, even if it might look like a puppet for a brief second, at least it looks like one that is physically on set.

Quite frankly, though, the effect was never ever going to be entirely perfect. The human brain is just far too masterful at detecting fake imagery, especially when it's moving. The other issue is that we start to delve into the so called 'Uncanny Valley'. Although the name sounds like the title of a quaint, fluffy soap opera, it's actually referring to the realism of Robots that are made to look human. The concept was first identified by the robotics professor Masahiro Mori in 1970. It's essentially the point where we go from feeling warmth, empathy and sympathy towards a more humanoid machine, to suddenly feeling unease, fear and revulsion as a machine starts to look more and more human-like. As a machine progresses in realism and becomes indistinguishable from humans, the feelings of empathy return. This is normally displayed in graph form, with a massive dip or curve displaying the aforementioned "uncanny valley".

Does CGI Tarkin visit the uncanny valley? I believe so, but is very close to exiting it. It's not perfect and never quite escapes the valley curve, but it's worth bearing in mind that fans know they are looking at a performer who has long since passed. They know what they're getting and that it simply can't be the real Peter Cushing on screen. I was still in awe at what was achieved and I'm sure I'm not the only one. In fact, Cushing's former secretary Joyce Broughton was reportedly "taken aback" and "dazzled" after seeing her beloved employer on screen again whilst attending the film's London premiere.

Special mention should also be made of the other CGI recreation in the film, a 19 year old Carrie Fisher as Princess Leia, hair buns and all. Although less prominent in the film (literally only a few seconds of screen time), it's no less impressive and was achieved in a very similar way. It is somewhat poetic that Carrie Fisher's final big screen appearance before her unexpected passing was the role that made her famous.

The potential problem with all of this is not necessarily technical, but ethical. Many have asked if it is right to use a deceased actor in this manner, especially if they don't get a say in the matter. Peter Cushing's estate was apparently heavily involved and gave its blessing. It is also credited at the end of Rogue One. My feeling is that he probably wouldn't have minded. There is nothing in past interviews or correspondence that would indicate that he had negative feelings towards his part in the franchise and how much it entertained people (he even expressed regret for not appearing in the sequels for his new younger fanbase). Cushing very much believed that his beloved wife Helen, who died six years before his time in a galaxy far far away, had simply transitioned to another place. Although not an overtly religious man, he believed that death wasn't truly the end. He never had the chance to find out how right he actually was...