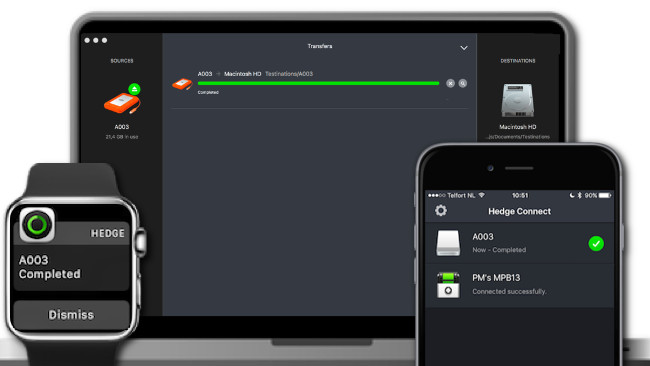 RedShark Review: Hedge Connect is a useful looking iOS companion app to Hedge that notifies you about the state of your offloads when working on set.

Hedge Connect, which works with both the free and premium version of Hedge for Mac, has been specially developed for movie and video producers who offload at the same time as they are shooting. When you're running your offloads somewhere near but not on the set, you won't always be able to see when media becomes free again for use. That means you have to guess when they'll be finished, which can lead to time loss.

Hedge Connect should put an end to the guessing. It runs on iPhones and iPads and works with Hedge for Mac 1.5 and later only. That's because it syncs with the latest versions of the desktop application to tell you if your offload processes have finished running and whether they have been successful. The iPhone or iPad app will pop up an icon in real time when a transfer has finished successfully or when something has gone awry.

The connection between Hedge Connect and Hedge on the Mac is secure. You only need to enter an access code in the iOS app that you'll find in Hedge for Mac's Preference panel. Hedge Connect supports multiple connections out of the box. You can connect as many iOS devices as you want. To rule out eavesdropping, several security measures have been built-in. For example, you can only connect when the macOS Connect Preference panel is active. Reset on quit is on by default, but you can change the setting, which makes life easier. If you leave the setting at its default, you will need to log into Hedge for Mac with each new session.

That's not a problem and it doesn't take much time at all. If you forget it, you may get confused by Hedge Connect not warning you of the connection gone lost. When you restart the iOS app after having quit it, the previous connection is still active — or so it seems. You will need to go into the iOS version's preference panel, select the option to disconnect the app and then reconnect. I think this should be made more obvious, e.g. a pop-up that warns you the connection is still active on the iOS side. An automatic disconnect feature that you can optionally turn off would be even better.

The app starts as an empty space. When an offload finishes, you suddenly see the media icon for the finished offload appear with a message of success or failure. These messages can be deleted by a swipe. For now, Hedge Connect only shows you when offloads are ready or have failed. Progress isn't shown, but that may change in the future.

When using the current version of Hedge Connect, you can't but think there's potential that begs to be explored. And it seems the developers are aware of it. "Right now, Hedge Connect can only interact through push notifications. Convenient as this may be, we of course would like to give you a live feed of Hedge's status and maybe even some kind of remote control," said Paul-Matthijs Lombert, SyncFactory's CEO. In view of how quickly Hedge for Mac gained new functionality after it was released, that sounds like Hedge Connect could soon be turned into the remote part of a complete offloading system that should make many people's lives much more comfortable.

Hedge Connect is currently available for iOS and works fine on both iPhones and iPads. It costs $9.99.