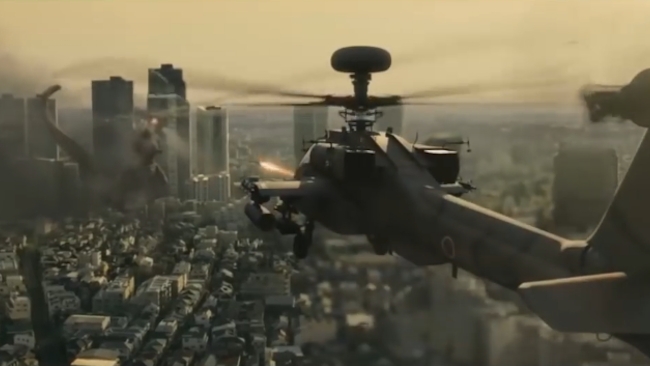 Some movie monsters never seem to go out of style. The most iconic example is Godzilla, who crushed his way back onto the big screen in Shin Godzilla for a week-long limited run in the United States from October 11-18, 2016. Already a huge box office hit in Japan, the film follows the monster’s disastrous journey from town to town before arriving to wreak havoc on Tokyo.

The film was written and directed by Hideaki Anno, a film legend in his own right whose attention to detail and creative process influenced every aspect of production. Having previously worked with Anno editing trailers for his films Neon Genesis Evangelion: Death and Rebirth and Neon Genesis Evangelion: The End of Evangelion, Atsuki Sato embraced the opportunity to join the project to combine VFX and editorial work as the film’s editorial and VFX supervisor.

With extensive visual effects and an 18-month production schedule, the team relied on extensive pre-vis work, a private network among three locations for shared editing, and working with Adobe Premiere Pro CC to complete the film on time. Sato previously used Premiere Pro CC in his work directing and editing movie trailers, and was confident in its ability to handle an extremely ambitious feature film.

“Hideaki Anno keeps iterating until he is satisfied with the result,” says Mr. Sato. “We spent a couple of months in pre-vis work and also created a Leica vocal rush, which was like a radio drama of the film, before we started shooting, to create a picture in our minds of what the film would be.”

The film was shot with ARRI Alexa cameras, with RED cameras used for special effects. Additional angles from the main camera were captured using Canon XC10. Anno shot clips inside tanks and helicopters using an iPhone and Sony Action Cam, and the teams even installed GoPros on the exterior of fighter jets and tanks. The filmmakers used the right cameras for each scene, knowing that the post-production team would be able to combine all of the formats into a single Premiere Pro project.

When it came time to edit, they established a private network connecting three locations: the CG and VFX studio Shirogumi, editing suites at Toho Studios, and additional editing stations at Khara, a company managed by the film’s director so he could edit at any time in a secure environment. “Adobe Premiere Pro CC let us edit simultaneously while controlling cost,” says Sato. The post-production team inserted video into the pre-vis version, created a post-vis version, combined provisional CG with the video content, and then moved on to the VFX work after the post-vis was approved. Sato worked on visual effects at the Shirogumi studio and Anno visited weekly to check in on the progress.

Anno constantly iterated and examined the film frame by frame. “Even in the middle of editing, the director would ask us to create and add new footage to a scene, and Adobe Premiere Pro CC let us easily add in various footage in multiple formats without any hassle,” says Sato.

Since its release this past summer, Shin Godzilla has earned more than $70 million. “We finished the project without any major problems,” says Sato. “I’m very proud of being a part of this amazing film and look forward to working with Premiere Pro CC on future projects.”