VEGAS is back, and it's in very good shape 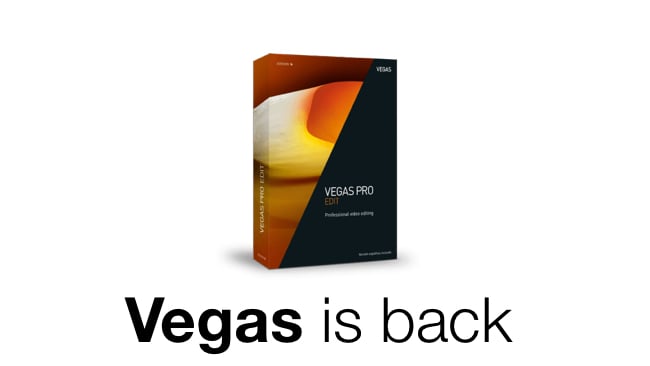 Once a Sony property, it seems Vegas is still in good hands, if Magix's first iteration (version 14) of the NLE is any indication.

When German software developer Magix bought Sony's Media Software assets back in May this year, we all held our breath and wondered what sort of future lay in store for the software that has always done things in its own way.

I've always loved VEGAS. Maybe it's that I come from a professional audio background that makes me like it so much. I've used most of the other NLEs, and like them a lot, but there's always a sense of "coming home" when I use the formerly Sony software.

It might be that, in some ways, it behaves like a DAW. It certainly has better audio than almost any other NLE. Indeed, it started life as a multitrack audio editor, and it took quite some time for it to be taken seriously as an NLE. I have always loved the fact that do make a dissolve, you just drag clips so that they overlap. This seems such an obvious way to do it, and yet most NLEs don't work like that.

With the launch of VEGAS Pro 14 this week, we can sleep easily again. It's quite clear that this isn't just a cosmetic upgrade: it's a big jump, with some extremely useful features.

HEVC technology enables users to compress video further than before with far greater quality. This means video can be shared at higher quality and faster upload/download speeds. It makes higher-quality streaming possible and lowers the file storage cost for content owners.

The new Trimmer window hover scrub tools make it much faster and easier to find and mark In and Out points in media files. This means faster editing and project assembly and makes the Trimmer window an even more powerful tool than ever.

Smart Zoom makes it possible to reframe shots in post production while still maintaining excellent quality. Keyframing tools enable the editor to create camera zooms that were not shot in the field and still preserve the shot's quality and integrity.

With the new Smart Upscale plug-in, users can repurpose their vast collection of HD footage for use in modern 4K and UHD projects. HD footage can be upscaled to these higher resolutions while maintaining the quality users demand.

A sophisticated new vignette plug-in enables users to exercise creative freedom in adding subtle vignette effects to their video clips. This makes it possible to alter video clips in order to lead viewers to a different emotional reaction to otherwise evenly lit shots and help focus the viewer's attention subconsciously to the important area of interest in a shot.

Support for the high frame rates (HFR) that modern cameras can shoot make it possible to get the most out of the stunning video that these cameras can now create.

Updated support for Blackmagic Design and AJA hardware enable users to make the most out of their modern hardware.

Improved support for HiDPI monitors make VEGAS Pro 14 work perfectly at high resolutions, so users no longer have to switch to lower-resolution monitors in order to work in VEGAS Pro.

If you've never tried VEGAS, it's about as drag-and-drop as you can get. It's ideal for quick projects, but has the depth to deal with longer ones. It's probably the NLE I'd recommend most for anyone who's never edited video, because the way it works is so logical. It also has a very "Windows" interface: it looks like a Windows program, so you don't have to spend time re-learning user interface conventions.

This is undoubtedly good news and it does seem after all that VEGAS is in very good hands.