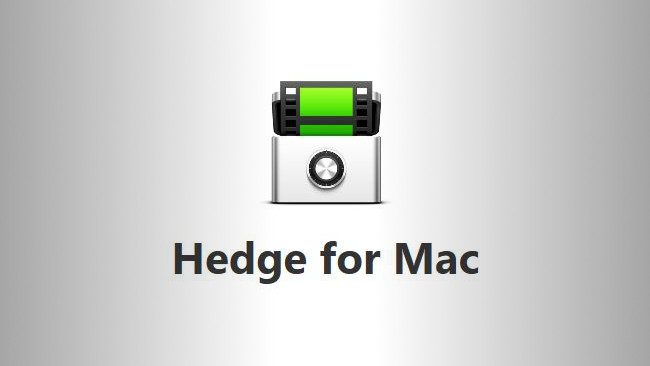 Hedge for Mac, an app which aims to speed up and remove the hassle of offloading and backing up media.

Offloading video clips should be fast. Red Giant introduced BulletProof several years ago, only to quietly replace it with Offload, a simplified version that offloads one volume at a time to an original media disk and one backup volume. ShotPut Pro is the industry's current standard for offloading. Version 5 can offload multiple folders and volumes to multiple target disks, but its interface remains a bit clumsy and it isn't very fast. Hedge for Mac promises to fix all that.

A small Dutch company of film, documentary and TV professionals was fed up with the frustrations that come with offloading and backing up media. They developed an app to make the offloading process faster and easier for themselves. And as so often happens, after a while, the group decided to make Hedge for Mac available to the market. The app has a modern, minimalist interface. There's a free version for casual users.

Hedge for Mac simultaneously offloads all of the source volumes you drop onto its left panel to multiple target disks you drop onto its right panel. The number of processes that run concurrently is only limited by your Mac's memory and CPU. The Hedge app takes up very little memory space and is one of the most efficient when it comes to handling large amounts of data.

Interface-wise, I was taken by its simplicity. The centre panel show progress bars. The left panel shows source media, while the right holds the target disk and backup volumes. The Preferences allow you to set variables-based disk names with customisable incremental numbering. The only thing you currently can't do with Hedge, unless you write a script for it, is create preset target folders. Hedge also doesn't format your media before it ejects them, but it does eject automatically if you wish.

Except for simultaneous offloading from and to multiple volumes, Hedge for Mac performs a checksum verification just like Offload and ShotPut Pro do (although without the ability to choose the algorithm). If you need more processing after the offload finishes, the app can be extended through AppleScript.

Volumes, disks and folders can be designated as source, destination or they can be ignored. While a transfer is in progress, you can click on a magnifying glass next to the progress bar to reveal the destination folder in the Finder. A real-time log panel can be opened to show you what's going on.

Hedge for Mac is continuously updated and the latest version got equipped with the Fast Lane copying engine – this one is reserved for paying users. That new offload engine copies almost as fast as the Finder. I benchmarked the new version myself using my iMac's internal disk, as well as a SATA III 6Gbit/sec Seagate disk connected through USB 3 and the same model through Thunderbolt as destination disks. I offloaded from five media sources, including a Ninja Assassin disk and two Lexar high-speed microSDs via USB 3 and two SanDisk SDs via USB 2. I had files on the media for a total of 25GB. The whole thing took slightly under eight minutes to transfer and verify. Red Giant's Offload took seven minutes to transfer a total of 12GB.

I definitely think it's therefore worth downloading the free version of Hedge for a look. The app handles ARRI footage just as efficiently and fast as GoPro MP4 files. Hedge Premium costs €99, while the free version offers the same functionallity but misses pro features such as Fast Lane, RAID/NAS support and concurrent transfers.