Is Avid really going to be everywhere? 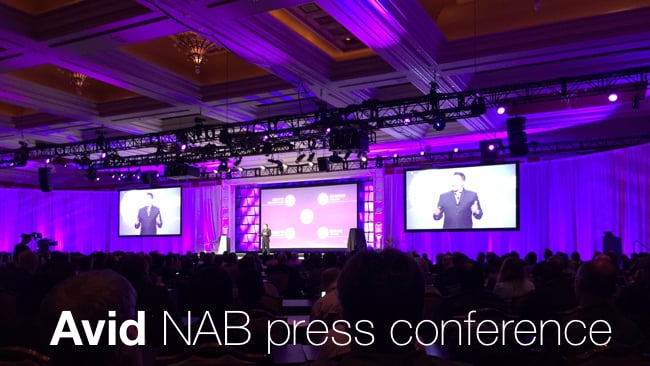 Avid is pushing ahead with it's all-embracing Avid Everywhere platform, which, while impressive, has left us wondering about the future of some of its core products.

Unless I missed it, there wasn't a single mention of Media Composer at Avid's Press Conference on Saturday in the Wynn Hotel in Las Vegas.

I think I caught a glimpse of it in a video compilation of good things that had happened to Avid over the next year, but there was nothing specific about it at all.

What there was in abundance was Avid Everywhere, Avid's platform for connecting all the disparate ends of the content creation and distribution business.

It's always hard to start out with a platform. Think about the telephone: when the telephone platform started, there was only one person on it. Even when there were quite a few, its use was limited. You might be able to remember what the Internet was like when the World Wide Web was in its infancy. It wasn't like it is today. It was more of an experiment.

According to Avid, they're will past this point now with Avid Everywhere. It's being adopted by facilities where they need a complete integration of every aspect of their work. Avid gave some examples but did not say what percentage of what size market their figures represented.

We also saw some clever on-screen graphics which have presumably come from Avid's acquisition of Orad in June 2015 for $65M. There's no doubt that some of these demonstrations were state of the art.

We first saw ProTools' new ability to work with remote users at NAMM in Los Angeles in January. This is a credible demonstration and probably the closest Avid will come for a while to making Avid Everywhere seem relevant to end users who don't also happen to be large enterprises or production companies.

There's an irony here that is at the centre of what Avid is trying to do. Because the more they talk about Avid Everywhere, the less the company means to individual users.

In one sense, they're doing this, by reaching out to users with the Avid Customer Association, which modestly describes itself as "the world's most innovative and influential community of media and entertainment industry professionals".

But among users not in the hall, and maybe among some that were, it feels (certainly to me) like there's a disconnect between the management and the customers.

It may be just that IT industry concepts like an Enterprise Service Bus and a Service Oriented Architecture (which I strongly suspect the is philosophy behind Avid Everywhere and other, similar all-embracing media systems) are hard to grasp for small companies and individual users. I interviewed the Avid CEO, Louis Hernandez Jr., in January and there are some hard statistics backing up his all-encompassing approach.

But I was left thinking that a sizeable part of the audience was longing for the days when Avid press conferences talked about new and essential features in Media Composer, Symphony, and other products in the Avid fold. You can't live in the past but not mentioning one of the companies core software pillars does make you wonder about the future for these venerable products.

Avid Everywhere is a clever and - it seems to me - well designed product. But there are other choices, and - quite obviously - it's not everywhere yet.