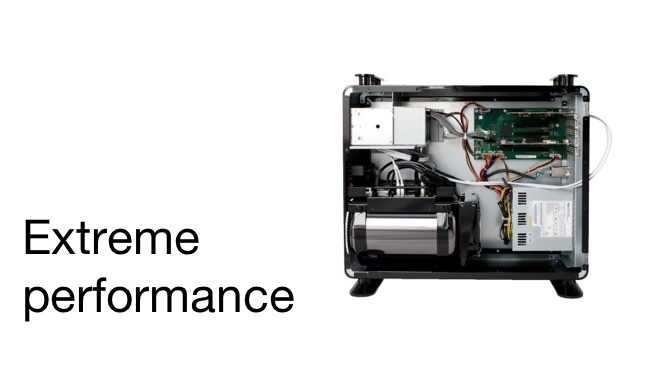 Side view of the quad slot LTNG XQ 8 DTMP

The new JMR “Lightning” LTNG-XQ Tower series is the ideal choice for Apple Mac Pro users having only Thunderbolt expansion available, but who want to connect to PCIe peripherals widely used in the digital video, digital cinema, corporate video and production/post production industries.

The LTNG-XQ series is the only four slot Thunderbolt 2 to PCIe desktop and rackmount expander with optional 8-bay RAID storage in the industry that provides:

The JMR “Lightning Tower” provides so much operating bandwidth that applications can utilize all of the 20Gb/s bandwidth available from each Thunderbolt 2 port.

The model LTNG-XQ-DTMP is a desktop/deskside tower, which quickly and easily converts to a rack mount using an optional rack mount conversion kit.

Installing the Mac Pro computer into the tower can be done in a few minutes, using only a Phillips screwdriver. All connections are internally routed to a Breakout Box (BoB) which is prewired, and provides GbE, USB3, HDMI, speaker and headphone connections to either the unit’s front or rear panel.

A big advantage of using two Thunderbolt 2 20Gb/s buses is that each internally connects to two PCIe slots, so peripherals in all four slots don’t need to share the limited available bandwidth of just one Thunderbolt 2 bus. This allows peripherals to run faster and more efficiently.

The internal PCIe ports are easily accessed by sliding off the side cover of the tower which reveals all the internals. At that point, installing, removing or exchanging PCIe cards is just like in a computer or server: Plug in the card, install a screw in the bracket, and you’re done. 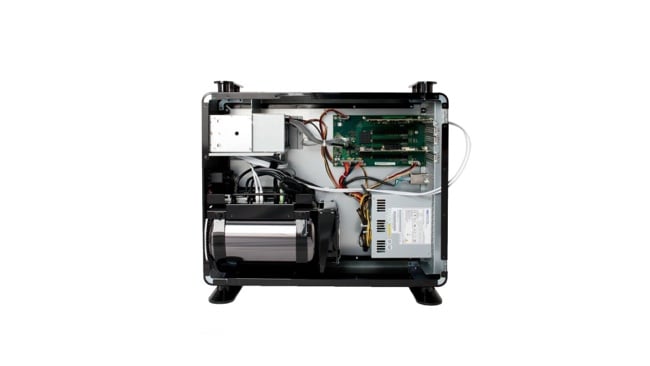 Besides the dual-Thunderbolt 2 bus support and the speed that provides, and the ease of installation of the Mac Pro, other unique features and user advantages are:

This unit is also available with an 8-bay “disk ready” RAID subsystem, as model LTNG-XQ-8-DTMP. The eight disk drive bays fit all 2.5” disk drives up to 15mm high, either rotating or SSD (or hybrids) of any make. The RAID model includes a built-in ATTO 6Gb SAS RAID controller, pre-configured, occupying one of the four PCIe slots. This model, then, has three more available PCIe expansion slots. Using 8 installed SSDs results in R/W data transfers of up to 1,800 MB/s.

Its construction is aluminium with a glossy black powder coat finish, exactly like the Mac Pro. It’s not heavy, easy to carry about, and very quiet in operation – suitable for on-set use. Light Iron, a division of Panavision, uses this very product in their new OUTPOST mobile processing lab, as pictured. 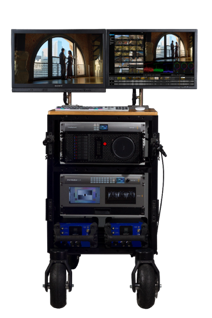