Wings: the first ever Best Picture and an in-camera vfx masterclass 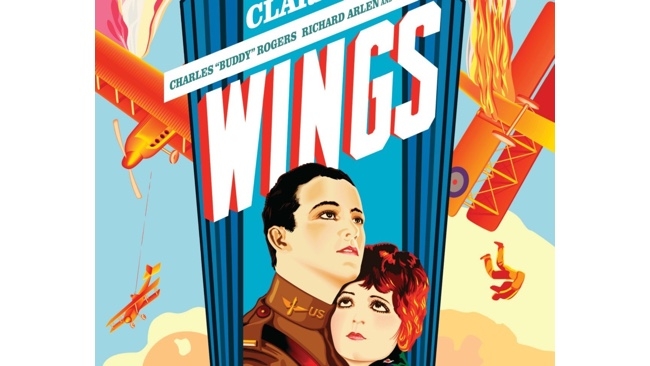 So the 88th Academy Awards Ceremony has come and gone with a few surprises and non-surprises, but the kudos heaped upon Mad Max: Fury Road for its in-camera vfx is reminiscent of that bestowed on the winner of the first ever Best Picture, 1927's WWI drama Wings. By Joe Foster.

The film that swept many of the technical awards, and took home the most Oscar wins this year was the Aussie road rage caper Mad Max: Fury Road. It’s not hard to see why a film like this impresses moviegoers and gains nominations when you consider how much was done in camera and only the odd sprinkle of CGI polish was used to achieve this glorious petrol headed spectacle; using around 150 stunt performers and, according to the Director, George Miller, shooting 90% of the film using practical effects. Vroom vroom indeed.

Its interesting to note that there was another film that achieved a similar height of critical praise for technical achievement way back in the early 20th century. That film was called Wings, and was released around 89 years ago in 1927.

Set during World War I, it tells the story of two pilots from different social backgrounds who fall for the same woman (a love triangle template that we would unfortunately experience many years later in Michael Bay’s Pearl Harbour), become pilots and join the fight against the Germans in France. The film is best remembered for its spectacular arial dogfights and very accurate depictions of piloting fighter aircraft during WWI. As well as containing one of Gary Cooper’s early on screen performances (his two minute screen time made him a star), it was also the very first winner of the Academy Award for Best Picture - the only silent movie to do so until 2011’s The Artist.

I had recently became fascinated with this relatively unknown film. Not just for the sheer scope of the production, but also its technical achievements during the silent era. It all started with a simple GIF on social media, which didn’t contain any amazing dogfight sequence or stunt, but instead someone had shared a single sweeping camera movement in the Café de Paris sequence. This camera movement was achieved by the director lying down on a platform on a specially constructed boom, whilst the cinematographer stands next to the camera, which is mounted on an extension below the boom. This then enabled it to glide across the tabletops.

Needless to say, as soon as I saw this sequence from a silent film shot nearly 100 years ago before the golden age of Hollywood, before World War II and before computer controlled rigs, I had to learn more.

What is the best element of the film? It takes Mad Max’s previously mentioned 90% estimate and ups it to around 99% for its action scenes back in 1927. Not a single piece of back projection,greenscreen or CGI was used, apart from the use of artificial colour for the machine guns and flames (and some rather cartoonish use of bubbles to depict a very drunken Charles ‘Buddy’ Rodgers). Everything else up on screen was as it was shot by cinematographer Harry Perry and directed by William A. Wellman.

Amazingly, and perhaps criminally, neither Perry or Wellman were even nominated for an Oscar for this film at the first Academy Award ceremony in 1929, although such an oversight was perhaps not surprising given that the best actor award was almost won by a German Shepard dog named Rin Tin Tin and the actual winner Emil Jannings turned out to be a Nazi. Still, at least Roy Pomeroy won Wings a second award for best engineering effects.

Wings is true in-camera stunt work at its best. This was championed by Wellman, who was a veteran air force pilot and was determined not to use the more conventional techniques of filming his dogfights using models or cockpit shots in a studio. To create more realistic shots, Wellman and Perry strapped their cameras to the bodies of the planes and had a hand operated button to start rolling the electrically powered film cameras (hand cranked cameras were originally preferred for use by an operator in the cockpits, but the shaky footage was unwatchable). Incredibly, the cast who had no flight experience had to learn to pilot the planes, roll the camera during flight, act in the cockpit, use hand gestures to indicate bad takes or take numbers and land safely.

One of the main stars was Richard Arlen, a former pilot and also acted as one of the military advisors - although his co-star Charlie Rodgers, who had zero flight experience, was said to have thrown up after filming each day. Some back up pilots, such as Lt. Hoyt Vandenberg, were used at first but it is incredible to see these actors eventually piloting the planes themselves, whilst at the same time having the responsibility of a camera operator. The actors of this film certainly earned their paycheque.

A total of thirteen cameramen were used to film different sequences, and almost all of them had flight and combat experience, giving another realistic edge to the final product. Wings was the first large scale production outside Hollywood, making use of thousands of soldiers, millions of dollars worth of equipment and virtually all of the pursuit planes the army had at the time (the US Army was more than happy to invest in the publicity).

It would also be the first to start a long tradition of collaboration between the Air Force and the movie industry. The Battle of St Mihiel (filmed in Texas rather than France) towards the end of the film was meticulously staged, with Wellman spending 10 days choreographing and rehearsing 60 planes and 3,500 extras - all of whom were real soldiers. Conveniently, the massive acres of land that were available was also used for training by the military, so creating the various pot holes and explosion holes was pretty easy.

Actors and pilots all got stuck into the action. One sequence involving a pilot named Frank Clark had to pretend to be shot in the cockpit during flight (utilising chocolate syrup pouring from the mouth as blood) and take a downward spiral as he pretends to die. A stunt which was both crazy, dangerous and thought of as fatal. Instead he successfully landed and walked away unscathed - although covered in chocolate.

Stunts also had to be filmed for real, with frankly insane but hard as nails stunt pilots in the cockpit. One example recalls veteran stunt pilot Dick Grace who, after performing a crash used in the final film that didn’t go as planed, broke his neck and had to wear a cast - although he did decide to cut it off to go dancing at the cast and crew’s hotel.

Incredibly, apart from this injury and one unfortunate fatality, no other major incidents occurred - despite thousands of extras, hundreds of real explosions and dozens of planes being utilised.

Wings was the highest grossing movie of its time, with a full roadshow complete with orchestra and some prints containing timed sound effects. It electrified the nation’s fascination with aviation and the daring pilots who were essentially the decorated knights of their day. It was also presented in an early widescreen process known as “Magnascope” or “Magnovision”. Although the original negative is considered lost forever, a dupe negative that was struck in the ’50s from a deteriorating nitrate print was found in Paris. Paramount spent around $700,000 to restore it back in 2012 for its centennial anniversary. It is now available on shiny Blu-ray disc, which is a double package with standard DVD.

Although Wings is obviously less showy, polished and technically proficient than Fury Road, it's well worth having a look from a historical and technical perspective. It's fascinating to see that there were filmmakers as brave, crazy and brilliant as the Oscar winning crew of Mad Max were as far back as the late twenties. As Steve Jobs once recorded for an Apple ad in 1997 “here’s to the crazy ones”…