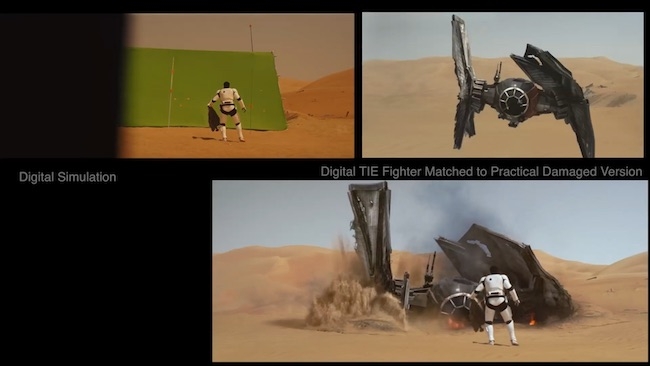 RedShark Summer Replay: Star Wars rapidly creates its own mythology, and one of the main myths already surrounding The Force Awakens was that it was the long-awaiting triumphal return of practical effects. And it was, but only to an extent.

Quite to what an extent has become clear in a reel released/leaked onto the internet ahead of the Oscar nominations, which was presumably circulated to the relevant judges and committees. Indeed, it seems that out of 2500 vfx shots, 2100 were CG.

The reel shows how canny the team was in mixing the two up, with digital embellishments on practical elements on many of the close shots fading out to more of a CG dominance in the long ones.

Of course, this approach is not new, but to date it has been more grounded in, for want of a better term, Earth-based productions, with a digitally enhanced New Zealand in particular making a spectacular Middle Earth in Lord of the Rings and, somewhat less gloriously, in the Hobbit trilogy.

The Force Awakens though showcases two things: first how far vfx shots have come in the past decade and a half — it really sets the bar to a new height in terms of CG technique — and second how vfx can be effectively used in the service of the film and its narrative.

Have a look below (with the slight caveat that links to the reel have been tending to disappear rather quickly over the past few days). Update: Oops! Sorry: the video's disappeared again. If we can find another link we'll point to it.

Oh, and there are some significant spoilers ahead if you’ve not seen the film yet