SlimRaw: How to shrink your raw file sizes 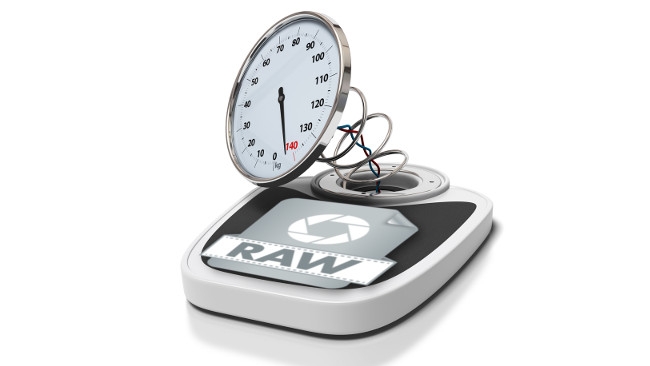 SlimRaw bills itself as an affordable solution for reducing the size of uncompressed cinemaDNG files, saving precious storage space by nearly 43%.

Since the introduction of cinemaDNG to the wider camera market, we here at RedShark have been keeping a watchful eye on how the format fits into the modern post production environment. One of the most common concerns vocalized over the years has been the immense size of the raw 'digital negative' created when shooting raw and how to archive them after a project is completed, particularly if you are an independent filmmaker. The latest release of SlimRaw, a relatively new DIT software application from Mihail Moskov, includes a promising raw file compression feature for those looking to reduce bandwidth or retain cinemaDNG files for the longterm.

The software is a professional DIT tool for data-wrangling raw format cameras that works on Mac and PC. The no frills interface is streamlined and easily navigable. Choose the camera masters' location/folder and then choose one or two destinations for a checksum verified data copy. Click the 'start job' button and a display outlines the details of process.

In addition to it's useful offloading function, version 1.4 of SlimRaw now offers the ability to utilize a variety of compression schemes to trim the extra fat from cinemaDNG files. The compression ranges from 'visually lossless' or the 'slightly lossy' compression ratios of 3:1 or 4:1. After a few tests, I found that, on average, one could reduce files sizes by 4% using lossless compression and up to 57% when applying the lossy compression of 4:1. In either case, the compounded memory saved quickly adds up.

Why you should reduce your raw file sizes

There are many instances in which you might want to utilize reduce the size of your cinemaDNG files:

- Let's say you have decided to take on a long-form verité documentary project and want to utilize the flexibility cinemaDNG offers in post. Films such as these can quickly compile footage in the dozens if not hundred of hours. The ability to shave off even 4% of your total data costs is a huge deal. Even plopping on a 3:1 compression ratio is still better than most high-end advanced codecs offer.

- You might own a camera such as Digital Bolex's D16 which only shoots to uncompressed raw. SlimRaw offers an alternative to moving your DNG files to a specific codec, such as ProRes.

- Your project is straight up low/no-budget and you need to sacrifice (minor) quality to afford storage for your production, even if you're shooting at a reasonable shooting ratio.

- Editing native DNG files has become a reality within a number of non-linear editors. If you're experiencing a lag, but still need to work in raw, applying compression can reduce the bandwidth requirements for working with your footage.

- Archiving! While you might keep your full un/lightly compressed raw files for the initial run of your production, archiving those large files can frankly be a headache, both in terms of cost and over all practicality. Applying some compression to your footage before putting it away in the vault is a good way to save on archival media costs, as well as time spent on wrangling it. Fortunately, SlimRaw maintains all the metadata of your original camera masters, so you can easily restore and reference the media later on.

One might take a look at words like 'compression' and 'lossy' and start pulling his-or-her hair out, shouting, "Isn't the point of cinemaDNG to offer uncompressed images?"

My response is: "Maybe." As I've stated several times before, I'm not a video-math-junky. My primary interests revolve around apparent visual quality of the image I'm capturing and keeping an open mind about the practical realities of filmmaking on a sliding scale of budgets. Keeping this philosophy in mind, SlimRaw is a smart way to wrangle cinemaDNG raw files and is certainly worth checking out.