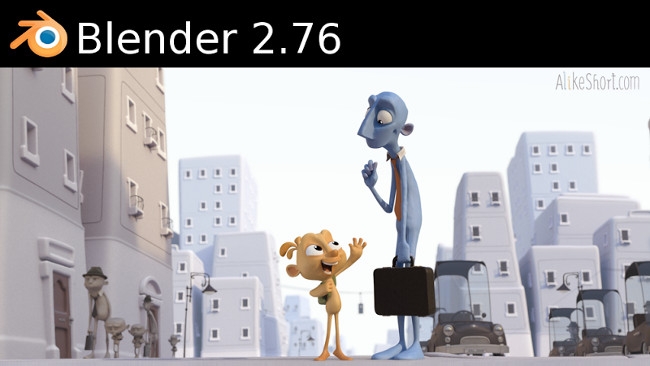 A lot of work has been put into optimizations, both in regards of performance and memory consumption, for Blender 2.76. Here's a rundown of the most important changes:

The viewport got a big boost that should be noticeable in complex scenes, sculpting and painting. Freestyle, the line rendering engine, now uses less memory and has more modifiers available to change the look of lines on the fly.

File browsing and thumbnail creation also got faster. Thumbnails can now be created for objects, groups and scenes and all the content of a Blender file can be shown in a flat layout without folders. When linking or appending, multiple assets can be selected and imported at once. All this is groundwork for the upcoming asset manager, which will be integrated into future versions of Blender.

The workflow in the node editor was improved by moving nodes automatically to the side when a new node is connected in between two others.

The new behavior is turned on by default but can be disabled.

The integration of OpenSubDiv by Pixar allows extremely fast computation of subdivision directly on the GPU. For that to work, the Subdivision Surface Modifier must be the last one in the stack and no modifiers that change the topology of an object during an animation should be used. The GPU version of OpenSubDiv does not work on Mac OS X and several other limitations apply, like only being able to use one material on an object with OpenSubDiv. The Blender developers want to keep working on removing the current limitations and making OpenSubDiv the default method for computing subdivisions, but for now it is considered mainly a tool to speed up animation previews.

The Cycles render engine now can use AMD GPUs on Mac OS X with the minimum required version being 10.11 El Capitan. On Windows and Linux, a number of fixes allow to use a wider variety of GPU models by AMD than in previous versions.

Cycles also got support for motion blur from camera zooms and image textures can be repeated, extended or clipped. The new point density textures allow points in space to be rendered with a volume. Vertices from geometry or particles can be used as source. Point density textures are usually used to create clouds, but can also be useful for other VFX and motion graphics work.

As an optimization, parts of a scene that are not visible can now be discarded before rendering with Cycles. That means that the objects will not be visible in reflections and not contribute indirect light, but that is not a problem in many situations, for example when rendering part of a grass meadow.

Rounding out the rest

The video sequence editor (VSE) can now render text strips. They are limited to one line per strip and the main use-case is subtitling. The final text sequences can be exported in .SRT files, which is a common format for subtitles.

The speed effect in the VSE can render with sub-frame accuracy when a scene strip is used for input. In this way, a gradual shift from one speed to another is possible; before Blender 2.76, the speed effect only worked with frame accuracy, which led to stuttering in many situations.

The integrated animation player, mainly used to view animations after they have been rendered, now supports sound playback for video files and received a small cursor to indicate the current position in the animation. It can now be paused and resumed by using the spacebar key.

In addition to the aformentioned features, Blender 2.76 features a lot of smaller improvements and workflow enhancements and more than 410 bugs have been fixed that existed in previous versions. It is available for Windows, Mac OS and Linux at http://www.blender.org/download/.