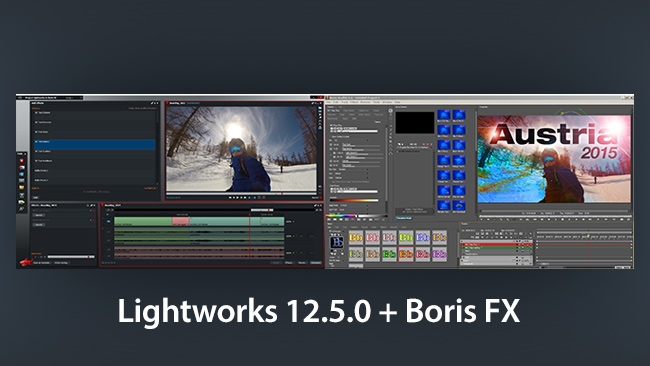 In an effort to bring Lightworks up to "modern standards," Editshare has invigorated its nonlinear editor with a bevy of new features and a partnership with Boris FX.

All the major editing programs, including Avid Media Composer, Adobe Premiere Pro and Apple Final Cut Pro X, have their die-hard fans. For many (especially younger editors), the current editing system of choice is the same one used when they learned to edit. Of course, the longer your career, the more likely it is that you've tried other editing systems, either out of a real need for a better solution or simply out of curiosity.

In its recent history, Lightworks has been the proverbial little engine that could. In the early days of nonlinear video editing, it reigned, along with Avid, as the top editing systems. But those early users moved away from Lightworks and its need for proprietary hardware, in favor of NLEs that could be installed on non-proprietary hardware (i.e. your computer). Since Editshare acquired Lightworks in 2009, the company has expanded the program's reach across the three major operating systems (first Windows, then Linux and OSX) and has made incremental improvements along the way. The thing about incremental improvements is that they add up. Editshare has steadily built Lightworks into a fast, capable and stable editing system, buoyed by a loyal and active user community.

The Lightworks community may have reason to rejoice with the release of Lightworks version 12.5. The improvements will benefit Lightworks Pro users the most, but there are features that even Lightworks Free users can enjoy:

Previous to version 12.5, Lightworks could only export 4K video as an image sequence. Now, Lightworks Pro can export 4K four additional ways, with the H.264/MP4 option including configurable bitrate (with Constant and Variable settings) and compression levels. For those that yearn for better interoperability between programs, XML and improved AAF export have been added, again, just for Pro users. Lightworks Pro and Free users now have the ability to apply look-up tables, or LUTs, through the program's Effects Panel like any other effect, meaning that they can be applied to clips or any selected sequence region. In addition, LUTs can be applied to an entire project through the Project Card's Video tab. With 12.5, users can also import and natively edit CinemaDNG video, such as the footage produced by certain Sony, Blackmagic or ARRI cameras with that capture setting enabled. This improvement essentially eliminates the need to transcode CinemaDNG files to a more editor-friendly intermediary codec.

The announcement of Lightworks partnership with Boris FX, the makers of popular effects plugins, is a welcome sign that Editshare is reaching out to third-parties to bolster its NLE and enrich the Lightworks workflow. Boris effects are now integrated in Lightworks with ample presets for those who aren't familiar with Boris software (or who prefer to use presets as a starting point). New users can purchase or subscribe yearly for a Lightworks and Boris bundle. Those buying outright (for $437.99) will receive both Boris FX and Boris Graffiti, while subscribers (at $174.99/per year) receive their choice of either the FX or Graffiti effects packages.

Lightworks has taken strides toward being a viable alternative to those other editing systems. Of course, these other companies will continue to innovate and develop their own products. Only time will tell if Lightworks can chip away at the NLE market. However, you can expect Lightworks to keep moving along, perhaps even picking up a little speed to gain on the leaders.